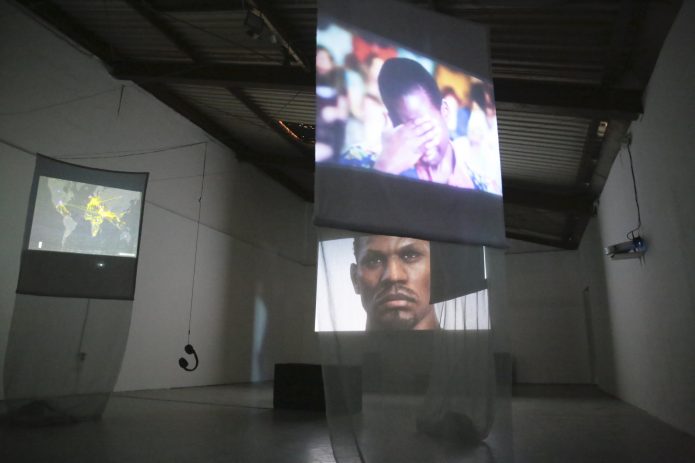 Initially commissioned by Arts Catalyst ‘Genetic Automata’, by Larry Achiampong and David Blandy, is being shown during NEoN digital arts festival at GENERATORprojects from Saturday 2 – Sunday 17 November as part of a national tour.

Unlike when the work was shown in Arts Catalyst’s own gallery in London, curator Saoirse Anis has incorporated fabric into the installation – making the work much more tactile. Videos that were displayed as static screens are now projected onto a soft grey material, somehow making the work much more eerie and menacing. Headphones hang from the ceiling, as the main video piece focuses in on human skin, zoomed in until the smooth surface looks pockmarked and shiny with sweat.

Content wise, ‘Genetic Automata’ explores the story of John Edmonstone, a freed slave, who taught Charles Darwin taxidermy. Through the motif of birds it explores issues of race, eugenics, segregation, and the people that conventional history leaves out. 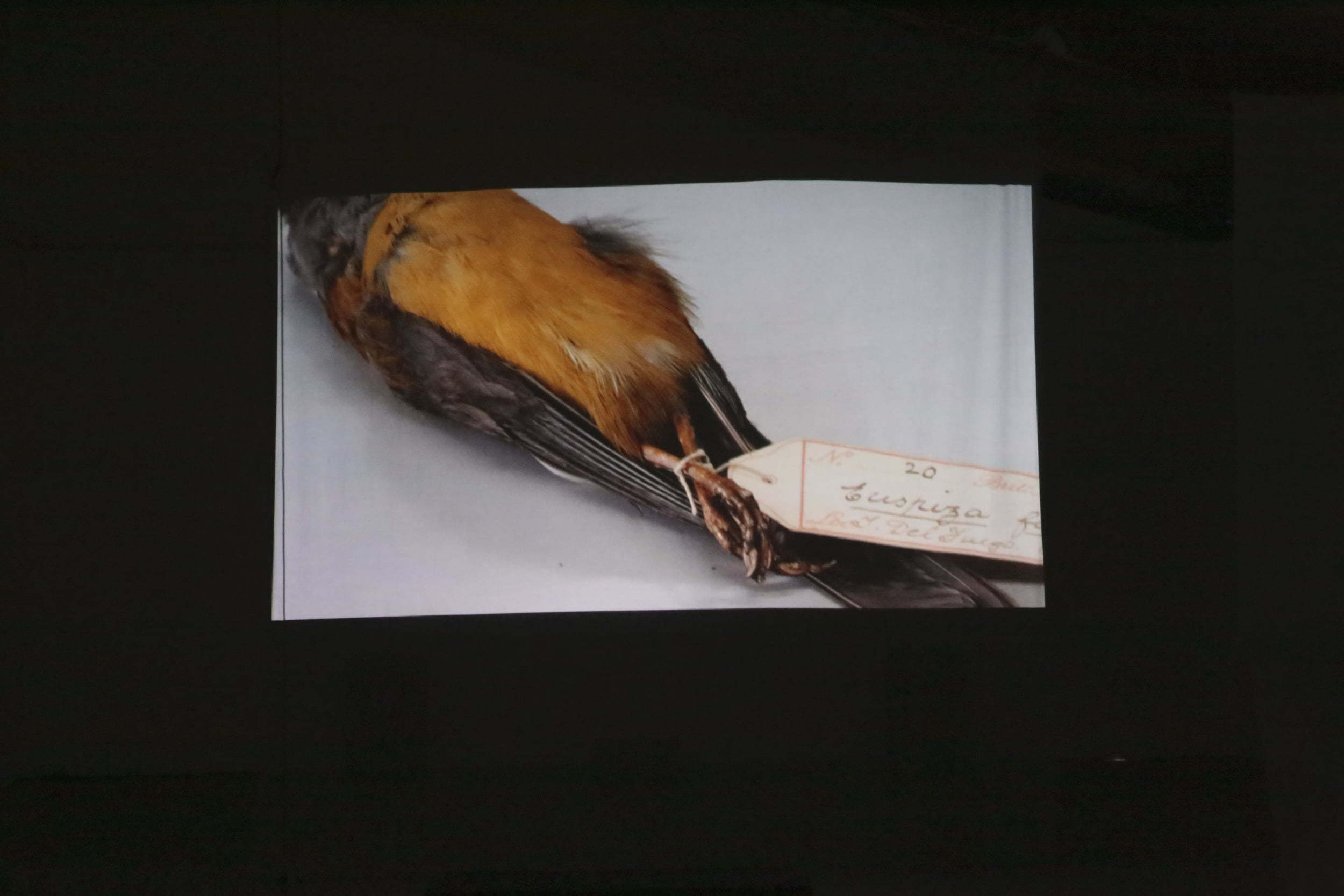 In a wider-ranging interview with NEoN earlier in the year, Achiampong and Blandy explain: “We were looking into the history of DNA and evolution, and came across the story of John Edmonstone. The story seemed to embody many of the issues we wanted to think about in our work, from the history of scientific racism, the dissemination of knowledge, to the value placed on different types of knowledge.

“In contemporary society racism is still a huge problem, the accelerated rise of nationalism in the Global West – for us, this project is opening up how we look at historical myth and how it still informs the present for some in dangerous ways.”

For Anis the exhibitions have a personal note, as they are her first foray into curating. She says: When NEoN first approached us with Larry & David’s work, we were all incredibly excited. At the time, I was thinking quite a lot about race relations, and the roles played by various media in influencing the way we form our identities, particularly in relation to racial representation. I was also starting to itch to have my first curatorial project, and so this just fell quite beautifully into my lap.”

The fabric, Anis explains, was a gift from the exhibitions team at V&A Dundee, who offered it to the artists collective after the de-install of the Videogames: Design/Play/Disrupt exhibition. Anis says: “What I love about the fabric is that it is so adaptable – pulled taut, it creates a traditional, rigid projection screen, but, hanging loosely, it adds movement, and an almost ethereal quality.”

Having seen the original version of ‘Genetic Automata’ in the Arts Catalyst’s Centre near King’s Cross in London, Donna Holford Lovell, director of NEoN, is especially pleased with the results.

She said of the exhibitions: “Saoirse’s interpreted the work from Larry and David in a really interesting way, there’s a subtle softness to it which makes the avatar experience a little bit more disturbing. And Toby’s work is just a brilliant development from his degree show stuff, it’s very playful and sinister at the same time. I just think we should keep an eye on him and where he goes in the future.”

Toby Jackson, a recent graduate of Duncan of Jordanstone College of Art & Design, was also invited to respond to ‘Genetic Automata’ with ‘Sensor’, which is based on his degree show work ‘Blind Eye’. The original work used an Xbox motion sensor to critique surveillance culture. In that work the person who set off the motion sensor would vanish, leaving only the increasingly unrecognizable image of any onlookers. For NEoN digital arts festival Jackson developed the work, emphasising the agency – or lack of it – that individuals have in a world of increasingly complex technology.

He explains: “The aspect of Genetic Automata that stuck with me was the discussion around the alteration of narrative with Darwin’s taxidermy teacher John Edmonstone. Sensor acts as the machine for this censorship and segregation, defining spectators with a class and statistics to sort and segregate. Throughout the course of the piece, this machine is torn down and the categorisation is disabled as these hidden narratives are once again brought to light.”

Standing in front of ‘Sensor’ your silhouette is illuminated on a large screen within the darkened room. Live motion capture tracks your movements, creating an interactive projection. Your image becomes distorted, pixilating and eventually fracturing into a constellation. 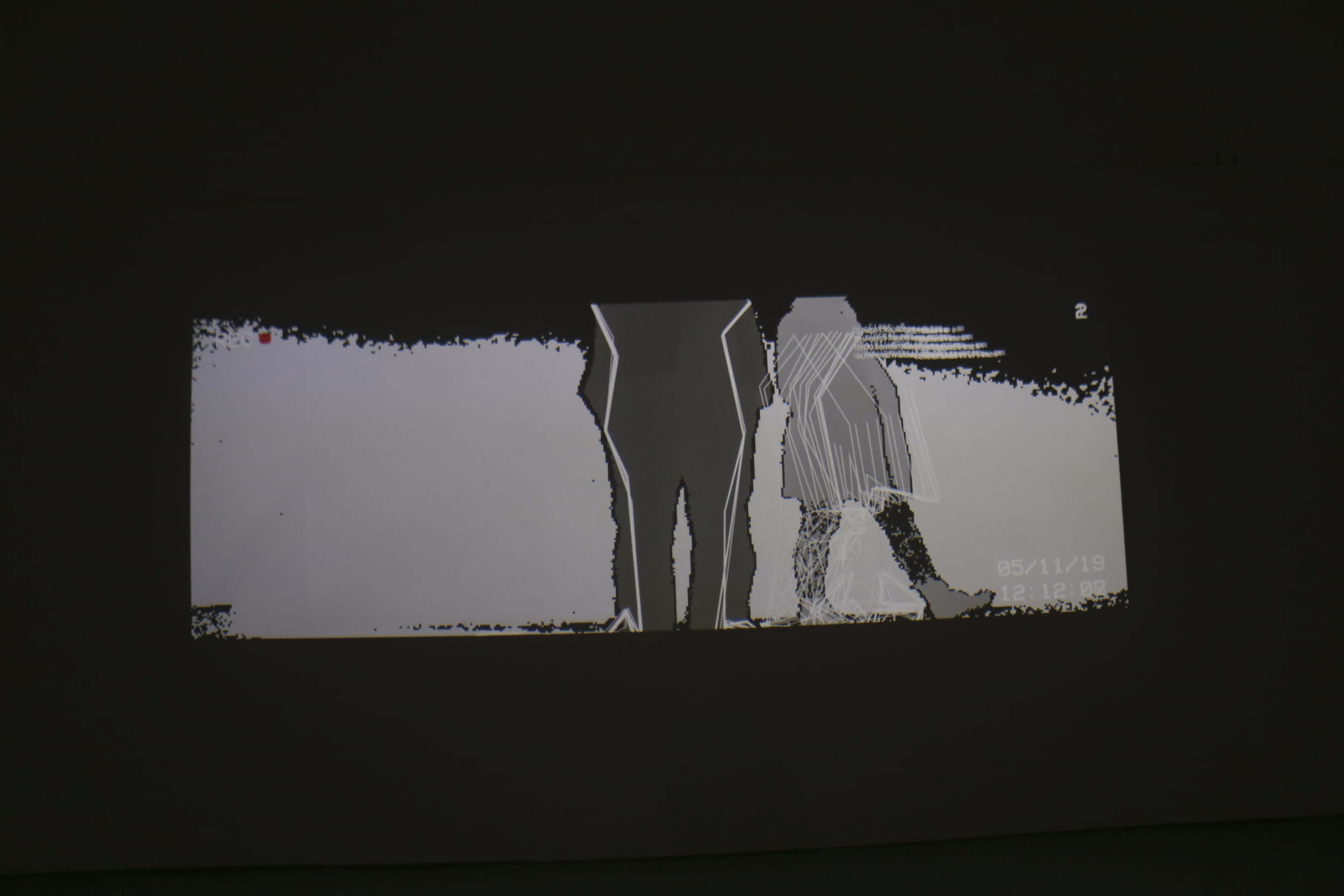 Jackson says: “I hope to illuminate the capabilities of surveillance and corporate censorship as computers continue to evolve by inviting viewers to interact and play with the technology and letting them discover its potential for themselves.”

Finally, Anis explains that what drew her and the rest of the GENERATOR committee to select Jackson’s work was to do with how he approached the relationship we each have to technology and the potential of surveillance to analyse, distort, and redefine identities.

She says; “We also loved the interactivity of his work, as it encourages the audience to engage further, and creates a poignant contrast between the absent-minded and fun way in which we might watch our dancing selves being manipulated and distorted on screen, and the more sinister implications of surveillance and manipulation of self that the work touches on.

“We were also really excited to see what Toby would create in response to Larry and David’s work, and how this might influence his creative process, to create two separate exhibitions in conversation with each other.”

GENERATORprojects is open from Thursday- Sunday, with ‘Genetic Automata’ and ‘Sensor’ running until Sunday 17 November. Join us for the ‘NEoN Walking Tour’ on Thursday 7 November, which begins at the venue at 6pm.