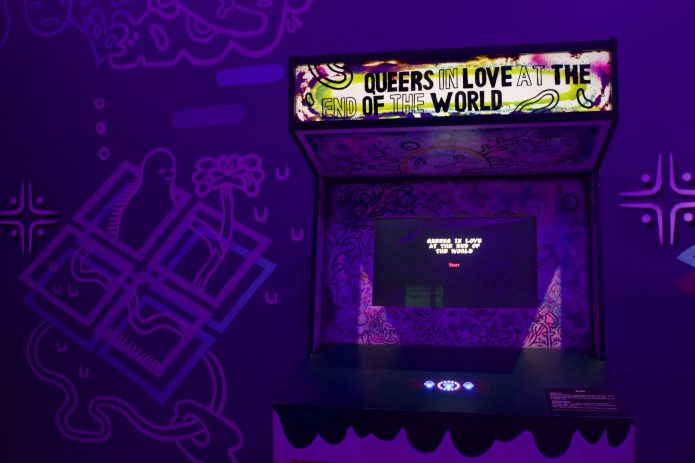 The new Videogames: Design/Play/Disrupt exhibition at the V&A Dundee is a riot of colour, politics, and fascinating insights into the world of game design.

As you enter you’re invited to view sketches and storyboards from big names games such as The Last of Us and No Man’s Sky, as well as indie fare like the vibrant mobile puzzle game Consume Me by Jenny Jiao Hsia. There’s also interactive literature like Kentucky Route Zero and art game The Graveyard, which both show a side of the industry that the casual viewer might not be aware of.

Next is the ‘Disruptors’ room, one of my favourites, asking questions such as “Why Are Videogames So White?” and raising issues of gun violence, sexism and the portrayal of Islamic culture in games. There’s a film featuring a diverse range of game designers, developers, and journalists talking about the specific issues that they face in the industry. There’s also some games you can play, which are mainly awareness raising rather than… fun. For instance, one – Rinse and Repeat – has a mechanic that means it can only be played for two minutes every hour, but it’s presumably worth the wait. It’s inspired by gay pornography and the ‘locker room fantasy’ and is made by one of the speakers on the film, Robert Yang, who is himself gay. There’s also a familiar face in Anita Sarkeesian of Feminist Frequency talking about the sexualisation of NPCs.

In the next room the big cinema screen shows the extreme creativity of videogamers; looking at Overwatch fan art, construction projects in Minecraft, and the massive online communities of League of Legends and Eve Online. Huge beanbags invite you to sprawl out and let the barrage of information and bright images wash over you.

But the best room is of course the DIY arcade room ‘Players_Offline’ with games like Breakup Squad, a multiplayer game where your friends try to prevent you getting back with your ex, and Queers In Love At The End Of The World, where you have ten seconds to say goodbye to your girlfriend. Be warned, it could get sexual. There’s also more local fare with Hummingbird by Abertay lecturer Niall Moody and If Found by Abertay graduate Llaura McGee, which is a little difficult to navigate initially – just keep zooming in.

Overall, the exhibition is full of things to look at, read, play, and watch – all curated thoughtfully V&A Curator of Videogames Marie Foulston. It doesn’t shy away from asking hard questions of the medium, but also manages to celebrate all that’s wonderful about videogames. A definite must-see.

Videogames: Design/Play/Disrupt runs from April 20 to September 8. Tickets are available at www.vam.ac.uk/dundee