The RE:MAKE/RE:SIST show from Weave by Abertay is not afraid to pull punches. Part of this year’s NEoN digital arts festival, the show takes the theme of ‘react’ and runs with it, including pieces on gun violence, gender-based stereotypes, racist biometric technology and other hard-hitting subjects.

NEoN co-curator Joseph DeLappe displays his newly finished work ‘Elegy: GTA USA Gun Homicides, 2018-19’. The work used a modded version of the videogame Grand Theft Auto V to visualise real gun homicide data in the USA between July 4 2018 and July 4 2019. Extracting data from the Gun Violence Archive, each day’s gun-related homicides were fed into the project, which added the equivalent number of dead bodies to the game – leaving chilling scenes like a beach covered in corpses.

The work is accompanied by a looping, and in context deeply disturbing, rendition of ‘God Bless America’ as sung by Kate Smith in its first radio recording in 1938. Last year was the 100-year anniversary of the composition of the song and it’s a thoughtful and effective choice. 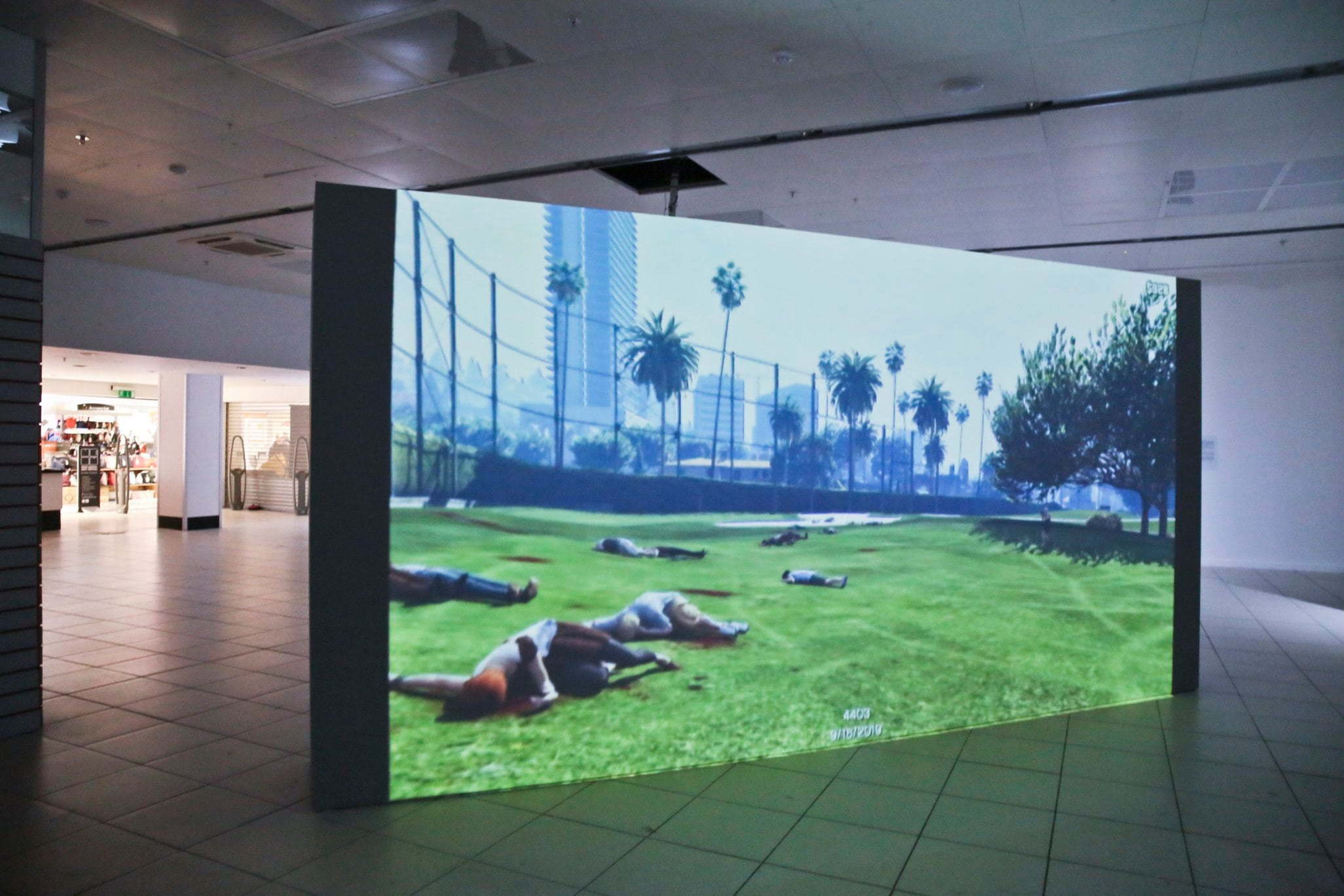 Tina Keane’s video installation ‘In Our Hands, Greenham’ from 1984 features 12 CRT TVs on a metal scaffold – invoking the idea of a barrier. The film explores the famous women’s protest at the Greenham Common Peace camp, which was set up outside an RAF/USAF base housing nuclear weapons. Keane uses video footage of the protests that she shot herself, interspersed with audio interviews and songs and overlayed with her own chroma-keyed hands, to tell the story of the women involved. 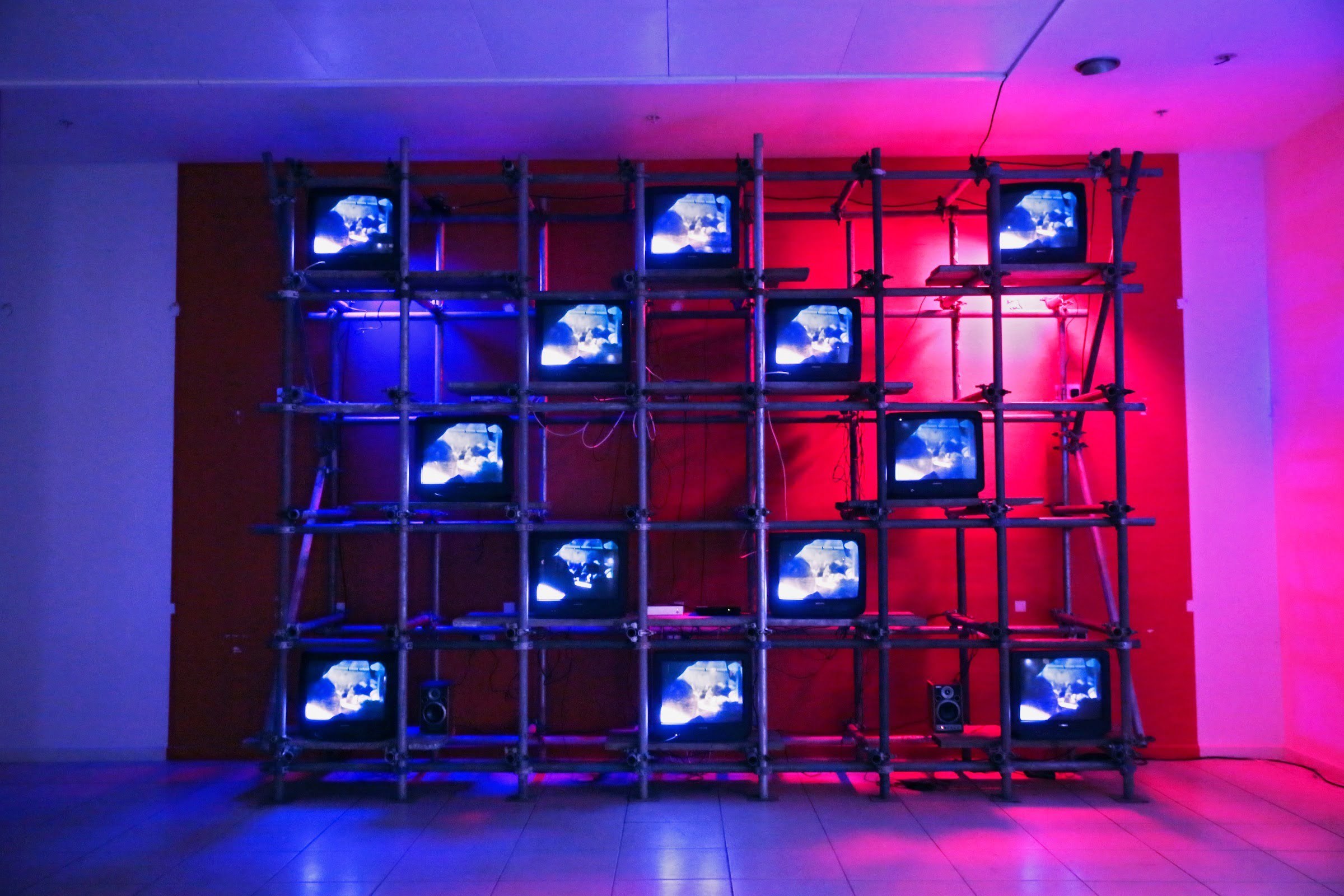 Tina Keane’s ‘In Our Hands, Greenham’

She says: “’In Our Hands, Greenham’ was one of my early videos, and popular at the time. I made it because of its importance in terms of an all women’s protest movement. It was an exciting time, and I vividly remember a visit to Greenham in winter: the perimeter fence decorated with objects.  For the video installation, the scaffolding with monitors forms a barrier, a barricade.

“Play has always been a crucial part of the creative process of my work to try new ideas out and build upon them as seen in the film: it is layered as new concepts are explored.”

Irene Tokini Fubara-Manuel’s work is displayed both as a videogame and as a three-way split screen film. The game ‘Dreams of Disguise: Errantry’, made last year, allows the player to navigate through the story of the film – reintroducing the agency that is lacking both in the passive nature of film-watching and also in the journey Fubara-Manuel’s character goes on in the film through UK Border Control.

You play as Fubara-Manuel, a Brighton-based artist born in Nigeria, in what might be, for some people, their first experience of playing a videogame with the avatar of a black woman. The game reinforces the ideas of the film, that border agencies and screening technologies are inherently racist and incredibly hostile places for those with black or brown bodies. You walk through airport security as you search for your friend who’s been detained at the UK border, feeling over-exposed as security cameras hang above your head and guards gesture at you. It compliments the film nicely. 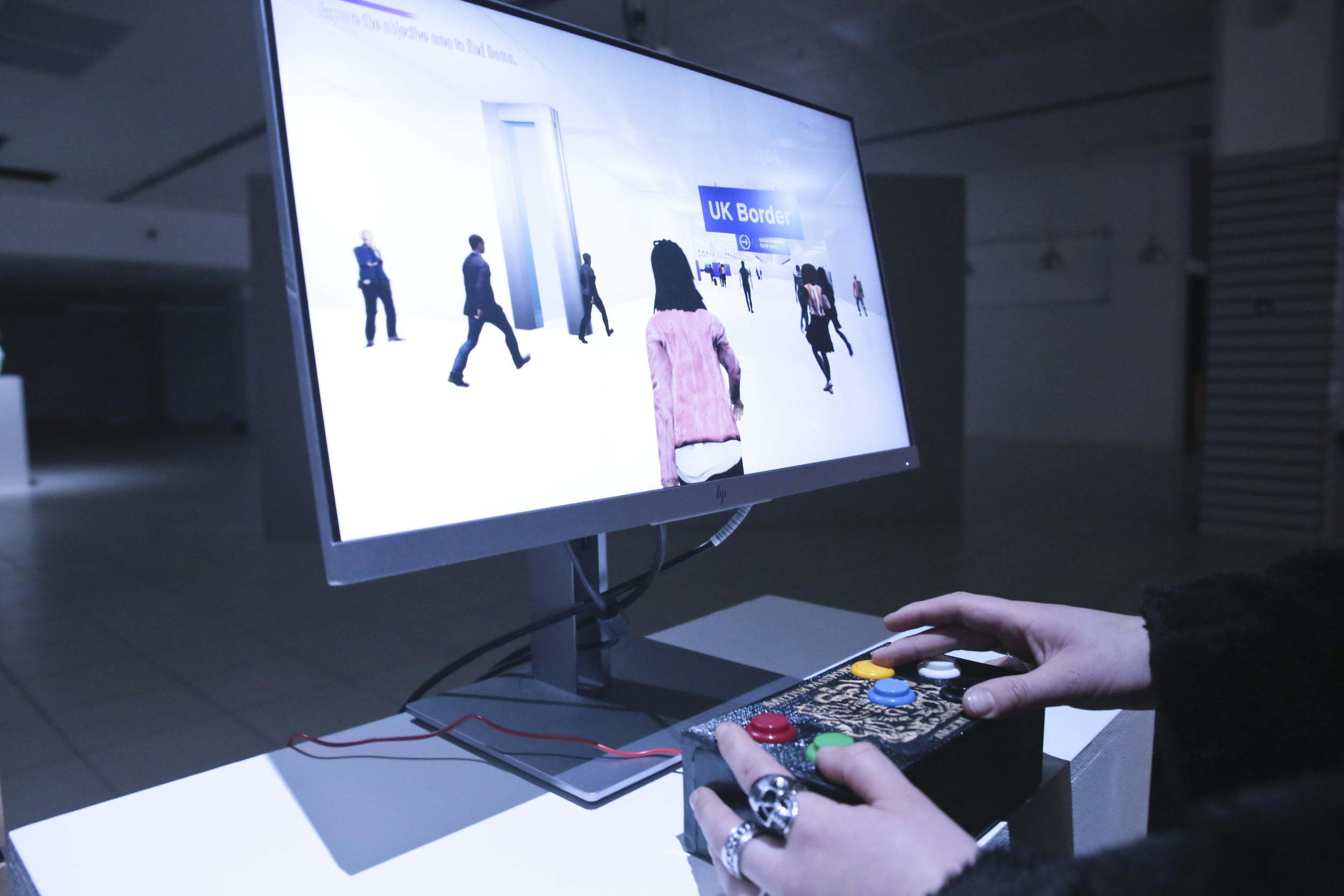 The show also takes us to the 90s with ‘The Barbie Liberation Organisation’ archival installation, provided by Igor Vamos of The Yes Men. The action took place in 1993 and a video made at the time shows a GI Joe doll being sawn in half, chest snapped open as he lies headless and helpless. This violent surgery was part of swapping his voice box with Barbie’s so that he could say things like “I love school, don’t you?” in an attempt to counter gender stereotypes being reinforced by children’s toys. The film features a pair of children commenting on the modified toy, as they consider the idea that men shop too, mixed with footage of newscasters covering the story. A modified toy from the action is on display, surgery scars visible, and the wall is covered in posters and archival material from the time. 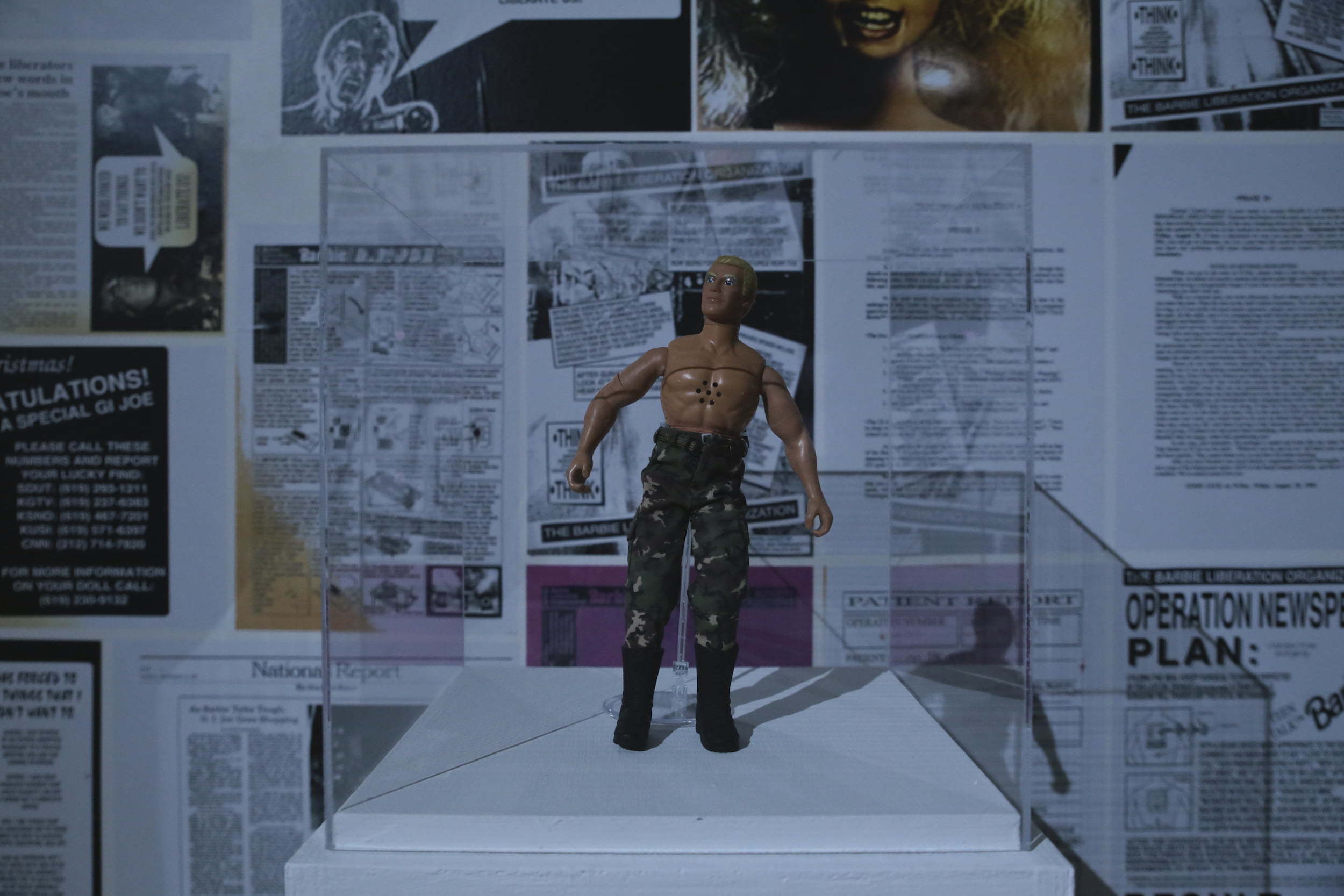 The show runs until Wednesday 13 November and also includes work by Matthew Plummer-Fernandez, reflecting on the climate crisis, and Addie Wagenknecht, whose work uses creativity to subvert the controversial and disruptive nature of the 3D printable ‘Liberator Gun’.