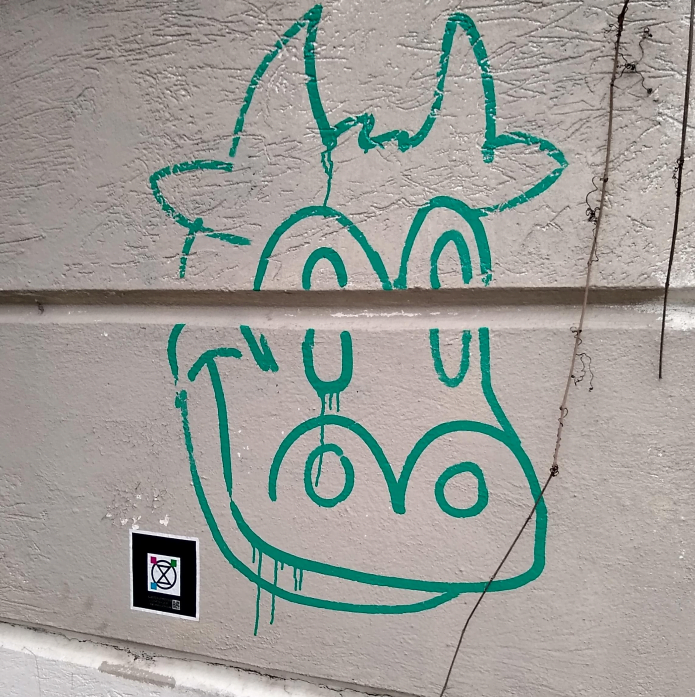 Matthew Plummer-Fernandez is exhibiting at this year’s NEoN digital arts festival as part of the RE:MAKE/RE:SIST group show curated by Weave by Abertay. His piece Echo Youth uses augmented reality to create mass demonstration scenes, using placards made by young people. We talked to him ahead of the exhibition.

What draws you to Augmented Reality? Do you think it’s under-utilised as a tool for political art?

Augmented Reality felt like a natural development of my work as I often use 3D models across animation, internet-based art, and 3D printed sculpture to jump back and forth between the digital and physical instantiations of things. My first project with AR however, did not involve my personal work. I employed the technology to bring Mexican digital art to the Peak District for Abandoned Normal Devices Festival. I curated My Wall Is Your Filter Bubble with Doreen Rios, and we created a walking trail along hilly fields with virtual works scattered along the journey. The AR exhibition was a political act of removing national borders at a time when Mexico was being vilified by Trump, and finding a way of transporting audiences to Mexico, and Mexican artists to the UK. AR has the potential to be a new commons, which in today’s over-commercialised and privately-owned world, is most welcome.

Why is it important for you to use children’s messages about positive environmental change, rather than placards from teenagers or adults?

I started the project around July last year, just before the IPCC report was due, and speculated that children would have to take to the streets to defend their future, so I arranged placard-making workshops with children. Meanwhile, Greta Thurnberg began her school strikes, sparking a global movement. It wasn’t long before I started attended Friday school strikes to collect the placards, rather than rely on the workshops. I’m constantly astonished by how big the protests have become, I attended last year’s global strike surrounded by a few hundred children and was already hugely impressed back then. The heart of the movement has been young people, but now I collect all the placards I see. You can always tell when an adult has made a placard, because they’ve try too hard to get it all perfectly aligned and centred.

How do you feel about Extinction Rebellion and other more recent environmental movements and activists who’ve appeared recently?

I joined Extinction Rebellion in April this year. I went there on the first day to take photos of placards, and then kept coming back and getting more involved. I continue to work and take action as part of XR. The movement has made it possible for me to see things more clearly, even though the reality of the situation is incredibly worrisome – I don’t think people fully appreciate how bad it is and how much needs to change. As an artist and designer, that need for a total transformation and transition to a different world system, provides an endless field of challenges to delve into, which is far more meaningful and fulfilling than trying to be successful within the current model. My skillset and approach remains the same, but the criteria and scale has shifted.

How do you imagine the future, and what is the role that art can play in helping to imagine a better future?

The big turn will either be a long-drawn out sleepwalk to catastrophe in pursuit of continued economic growth, a healthy transition to a low carbon system and global restoration of natural systems, or economic, social and environmental collapse. I think it’ll be an asymmetrical combination of all three. I think art needs to wake up, stop aspiring to join an art market which is mostly driven by a shady world of elite money laundering and tax evasion, and reconnect to communities. My favourite art happens on protests where it is raw, direct, and communicates the values and principles of the community, uniting them and giving them a voice. Many artists do this of course, but the market makes winners out of artists that reflect values such as individualism and competitiveness, so its not often you see folk art celebrated in cultural institutions.

How is your PhD going? What is the title of your project and what have you found out so far?

The PhD is done, it’s titled The art of bots: A practice-based study of the multiplicity, entanglements and figuration of sociocomputational assemblages. You can check it out here research.gold.ac.uk/26599/.

I understand you won’t be able to physically make it to NEoN this year, will you be following the festival on social media?