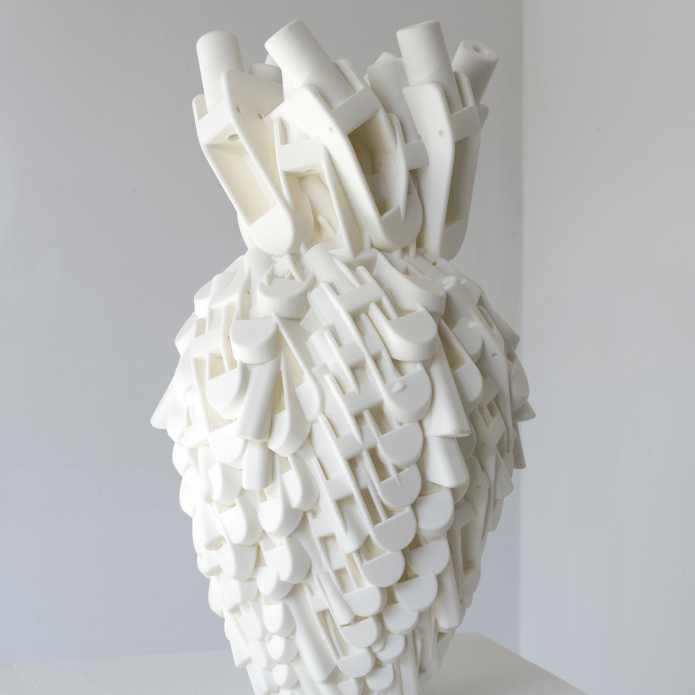 Addie Wagenknecht is exhibiting at this year’s NEoN digital arts festival as part of the RE:MAKE/RE:SIST group show curated by Weave by Abertay. She’ll be displaying her Liberator Vases, 3D printed vases made using the first open source downloadable handgun. Ana Hine talked to her ahead of the exhibition about torrenting, open source culture, and making politically charged artwork in the current art market.

How easy was it to get the template for the Liberator gun?

The files can be downloaded from any torrent site – so super easy.

By turning the gun into a classic vase you’ve repurposed a dangerous, potentially deadly weapon into something innocuous. Why did you decide to do this? And why a vase?

Similar to my piece Asymmetric Love (www.placesiveneverbeen.com/details/asymmetric-love) it’s about duality of function. It is a reflection of our current digital infrastructure, where access to a gun to anyone untrained is not seen as a threat. And this becomes the biggest threat of all. It is harder to get an abortion or a government issued ID in America than it is to get a handgun at Walmart.

The visually complex object of the gun to the vase mutates the recognizable features of the firearm into something completely different. If art and the information it translates can’t get people to confront the massive mechanisms designed to observe, and even influence them, what can?

This piece is a collaboration with Martin Zangerl and Stefan Hechenberger, what did you each bring to the project?

Martin is an amazing architect and has a brilliant handle on parametric design so it was thrilling to work with him. Stefan has a great understanding of translating the code to fabrication methods.

You’ve worked with the Liberator Gun before. What draws you to that particular gun?

I am drawn to the internet and the notion that the digital landscape/web/’the cloud’ is a bunch of people hosting their art, writing, dick pics, emotions, fears, and what gets them off onto servers – which is just a fancy word for other people, usually corporations, So maybe this gun, the web, it about this crisis of intimacy. Our phones become us and know more about our secrets, jokes, fears and joys than anyone else in our lives by a landslide. That’s a huge shift from even a decade ago.

Would you say you use your art as a form of political protest?

No, most of my work is shown in museums and galleries. I don’t find those spaces to be public in the sense of radical openness. They are driven by sales and donors with big collections and huge amounts of wealth. Public art can be protest, outside the white walls of galleries– but so much of that is funded by the same people who control political power and censor much of anything deemed political, in my point of view. It cannot challenge anymore.

At the same time, there’s a romance and fascination in my generation with forgery, copies and bootlegs and in that sense, I suppose there is legal protest, IP protest and so on… it’s a question of what is the original: the .mp3 I purchased on the iTunes store or the same .mp3 I downloaded from The Pirate Bay? Is the iTunes version the original because a corporation tells me it is, or is the one from The Pirate Bay the original because my friends tell me it is? Both sound musically identical. So which is real? My generation was born and grew up along with the .mp3, Napster and Pirate Bay. I want to divorce the experience of art from authentication of the brand of the artist; the power of the artist name – our social investment in the concept of lonely male genius and of ownership of an idea, a shape, or colour is boring. The certainty that something is real – is that even a possible anymore? People believe science is fake, porn is fantasy because if it was based on reality it would fail. Forgery embraces fantasy. It is disruptive to the system, which is something art and politics is supposed to do.

You’ve said before that ‘The private is political’. Can you unpack this statement a bit?

The phrase has many origins according to what research I have done. Its rooted in black feminism from Audre Lorde’s essay “The Master’s Tools Will Never Dismantle the Master’s House” for example or as Kimberlé Williams Crenshaw unpacked, “This process of recognizing as social and systemic what was formerly perceived as isolated and individual has also characterized the politics of African Americans, other people of color, and gays and lesbians, among others.”

I understand you won’t be able to physically make it to NEoN this year, will you be following the festival on social media?