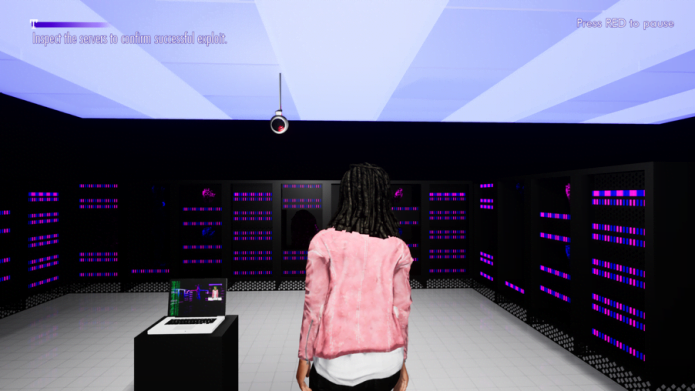 Irene (Tokini) Fubara-Manuel is exhibiting at this year’s NEoN digital arts festival as part of the RE:MAKE/RE:SIST group show curated by Weave by Abertay. Her piece ‘Dreams of Disguise: Errantry’ explores biometric surveillance and its racialized applications in border policing, based on her own experiences of UK border control. Ana Hine talked to her ahead of the exhibition.

How does your work help to expose the colonial and racist histories of biometric technologies?

I think of my practice and research as one holistic project. In my research I look at the colonial history of biometrics from its earliest applications in colonial Bengal. One of such histories is evidenced in the handprint of the Bengalese road contractor—Raj Konai—taken by the colonial administrator in the late 1800s. I link biometric technologies back to the Eugenicist, Francis Galton, who conducted statistical experiments  with the aim of categorising people racially and inferring attributes based on these racial categories. ‘Dreams of Disguise: Errantry’, specifically addresses the ways contemporary biometrics reinforce racial sorting through failures to recognise people with darker skin. In a scene where you are at the biometric checkpoint and the camera attempts to detect your face, the laptop shows “Found 0 faces.” The image you see on the laptop is pulled from my real experimentation with an open source facial recognition program on my Raspberry Pi. The program could not recognise my face. While it may have failed for multiple reasons, that particular scene from the video game reverberates Joy Buolamwini’s (www.youtube.com/watch?v=UG_X_7g63rY) research on facial recognition algorithms being trained on mostly white subjects.

You’ve mentioned Simone Browne’s book ‘Dark Matters: On the Surveillance of Blackness’ as an influence before. What’s so important about her book?

Simone Browne’s work is brilliant. Her work informs both my research and practice. She addresses several overlooked aspects in the study of surveillance. For instance, in the opening she writes on the black women held as slaves under the belly of a ship Jeremy Bentham boarded while he wrote about the Panopticon. Bentham’s Panopticon is understood as both a physical enclosure or prison and a metaphor of contemporary surveillance. In particular,  Simone Browne writes on biometrics as a process of inscribing or marking race on the skin. I have explained this earlier through Galton’s experiments and Buolamwini’s research. More importantly, I appreciate her approach to biometrics. She does not vilify the technology. Instead, she calls for a critical understanding of these technologies. I am deeply motivated by her statement that: “With certain acts of cultural production we can  find performances of freedom and suggestions of alternative ways of living under a routinized surveillance.  ” For me ‘Dreams of Disguise’ and ‘Dreams of Disguise: Errantry’ show such performances of freedom and alternative worlds.

How is your PhD going? What have you found out so far?

I completed my doctoral research in August. As a project in the humanities, the aim was not to “find out” something in particular. If anything, my research left me with more questions as biometrics increasingly play a central role in a number of political tensions. We see this in the recent Hong Kong protests where people use lasers to evade biometric (facial recognition) cameras. Such protests link back to the dissent against biometrics as a symbol of the rising consciousness of a population. An example of this is the role protests against biometric documents played in foreshadowing Kenyan independence. Jomo Kenyatta—an anti-colonialist and first president of Kenya—mobilised his people to burn their Kipande, a biometric (fingerprint) document that black Africans were required to carry in the 1920s. While these movements are almost a century apart, the application of biometrics is still growing. Complemented by Artificial Intelligence and Machine Learning, biometrics has a wild future ahead.

Similar to most artists, I mine my personal experience for your entertainment. I’m only joking. I use my experiences to connect with other black migrants and travellers who have had their hair searched for drugs or have been asked to provide mountains of documents to prove that they are not criminals. My experiences at the border have been quite mundane. I have had some good laughs with border agents—nothing out of the ordinary. However, we have to keep in mind that what is normal at the border are processes of unequal social sorting, violence, detention and humiliation. In addition, I am Nigerian. My movement through borders also considers the assumptions made about people from my country.

What does opacity mean in the context of surveillance and border control?

My idea of opacity builds on the theories of the Martinican poet, Edouard Glissant. For Glissant, transparency is the basis upon which we understand people in Western thought. He writes in ‘Poetics of Relation’ that: “In order to understand and thus accept you, I have to measure your solidity with the ideal scale providing me with grounds to make comparisons and, perhaps, judgments. I have to reduce.”

This is what biometrics does at the speed of our current processes of computation. It reduces bodies into data and places this data into categories—criminals, preferred travellers, legal, or illegal. Opacity is a counterpoint to acts of surveillance that render people as transparent. Think of the ways that full body scanners used in airports can see through your clothes to view your nude body. In terms of border control, then opacity, for me is agency. It is the right to own my body as a solid object, the data collected from my body and to know exactly what that data is used for. It is the right to an irreducible identity.

What is Code Liberation and how did it help you create ‘Dreams of Disguise: Errantry’?

Simply put, Code Liberation is a foundation that addresses the issue of accessibility and representation in STEM (Science, Technology, Engineering, and Math). I created my first game—‘BorderRitual 2.0’ (github.com/tokinifubara/borderritual2.0)—in a Code Liberation workshop with other cool people (codeliberation.org/news/2018/08/01/V&A_LDN_DesignWeek.html). We helped each other out while learning from wonderful teachers. The process and guidance from those workshops made coding and game development easier for me grasp. While I was attending the workshops, I was also making ‘Dreams of Disguise’. When I finished making the video, I realised that there was a lot of potential in allowing the audience to interact with the space I had created.  I had some dreams that still needed exploration. So, I made the video into the game ‘Dreams of Disguise: Errantry’ to let people wander through the virtual border.

You’re coming up for some of NEoN this year? What have you got planned and what are you excited about?

I’m excited to see Larry Achiampong and David Blandy’s ‘Genetic Automata.’ Their work ‘Finding Fanon’ is an inspiration for both my video and game. It might clash with my schedule but ‘Cis Penance’ also looks to be a great workshop. It reminds me of the ongoing work of the drag performer Victoria Sin, who just released a zine ‘Dream Babes 2.0’.

I am ‘sourcing’ information on the rights/rite to opacity. I started this as a manifesto I created as part of a workshop in Hyphen-Lab’s ‘Higher Resolution’ program at the Tate Exchange in September 2019. I want to know what people envision as a must-have right against surveillance—biometrics, physical, at the border, on the internet, in the tube, on your phone, in the hospital… I am hoping that people can draw on their experience to form a statement that reclaims their agency. Find more info here:  github.com/tokinifubara/ritetoopacity.