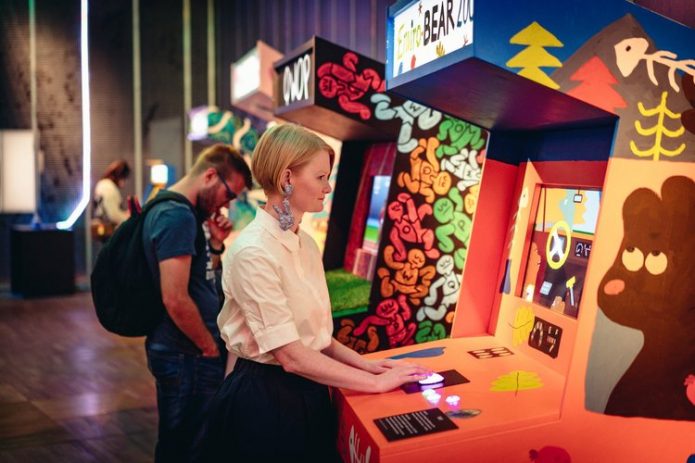 As the current lockdown prompts us all to consider new ways of working, Now Play This – an annual festival of experimental game design – made the decision to host a virtual version of their festival online in April.

NEoN’s festival communications coordinator Ana Hine caught up with guest curator Marie Foulston over Zoom, known here as the mind behind last year’s Videogames: Design/Play/Disrupt exhibition at the V&A Dundee, to discuss the emotional impact, the practicalities, and the lessons that can be drawn from ‘pivoting to the virtual’.

“It was definitely a challenge,” said Foulston. “We had about two and a half weeks to put together the virtual festival. It’s strange reflecting back on it now because it comes with a lot of personal stress and shared stress. Grief feels far too harsh a word to call it, I’m conscious of using that word to talk about the loss of a festival, but you’re losing something that’s been a key part of your life and work for the past four or so months – just having that grind to a halt.”

“Neither myself nor most of the Now Play This team had done something like this before, despite the fact that all of us work across games and specialise in digital media. While we were all very comfortable with that technology, we didn’t actually have much experience running digital events or virtual events –  but I think maybe we were better positioned than most, because it’s a space that we’re more comfortable in.”

Foulston raised the idea that because our physical environments have shrunk to “the distance between our houses and the supermarkets” virtual environments might be offering us something that we’re currently lacking – a way to present ourselves and behave the way we used to IRL. She speaks about getting ready for the Live From Animal Crossing event, which took place in the Nintendo Switch game Animal Crossing: New Horizons, and having a hard time finding something appropriate to ‘wear’.

She explained, “I’m a bit further behind in the game than some of my friends so I hadn’t had the Able Sisters tailor shop open just yet and that meant that I had a really limited wardrobe. If I’m going to host a Q&A normally I make sure that I’m dressed well, so two nights before one of my friend just said, ‘Hey, it’s okay, come round to my island, I’ve got a whole range of clothes and I’ve got some black and white stuff which I think is your style’. So I’m travelling there and I’m trying on different outfits and I pick a few things to take away with me. Then on the day I just put together the outfit of like cropped black trousers and a nice white shirt, which is exactly what I would wear. It was interesting that for me being in that space I still had the desire to present myself a certain way.”

Animal Crossing: New Horizons is a life simulator where the player arrives on a deserted island and has to build a town and populate it with talking animal characters. As the player develops the island they can build shops – such as the Able Sisters tailor shop, run by two hedgehogs – and a museum run by a talkative owl. The game also allows players to visit each other’s islands, grow fruit trees and flowers, and collect bugs, fish, fossils, and art. From a technical point of view the decision was made to host the Live From Animal Crossing event on the island – the ‘in game’ world – belonging to the member of the team responsible for recording the live stream. That way if anyone’s connection went down the stream of the game on Twitch wouldn’t go dark. A live chatroom was also set up on a Discord server so that the Now Play This team could coordinate the event remotely.

“It was quite fun actually,” said Foulston, “It was like our own TV station control room. We were taking questions from the Twitch stream and we were bringing it in so that the people conducting it didn’t have to keep their eye on too many things at once. I realised it was the same as me being sat in the front row watching a Q&A happening with my little 10 minutes sign and being like, ‘You’ve got to wrap this up!’, but instead I’m typing over Discord.”

“I feel like whole situation is causing this slight re-evaluation, people are becoming a little bit more I think sympathetic to digital communication tools –it’s no longer seen as this stereotype of an isolated sulky teenager in the corner just looking at a screen. No, this is one of the only outlets we have now and I think it’s changed our value on that. But there’s still part of me that misses the physical real world equivalents.

Moving a festival online changes who can attend. The very nature of the Internet means an almost global potential reach (taking into account time zones and people’s typical working hours), but puts those without the ability to go online – whether due to poor digital literacy or lack of access to the appropriate hardware – at a profound disadvantage.

“Obviously with Now Play This there were questions of digital literacy and also things like internet access, having a good laptop,” says Foulston. “There was a lot that we questioned. Things that would have had the highest amount of buy-ins would have been the Half Life Virtual Field Trip with Robert Yang, because to do that you would have to have a computer, you probably have to be comfortable with WASD controls, be able to navigate a first-person shooter, even just having the Steam gaming platform and being able to download and have access to the game.”

“But even for that we had different levels, so the core of that experience was the ten or so people who are on this field trip, but we also had the ability to stream and that allows for a different level of interactive engagement. So if you’re not comfortable or don’t have the ability to be able to go on that field trip you can still spectate or even interact by posing a question.”

Having built these different levels of engagement into the design of the remote festival, the Now Play This team were confronted with an issue that plagues online content – the pressure to reach a very large audience. For Foulston especially, having come from a digital marketing background, the assumption that all online content creators should strive for exponential growth is fundamentally flawed.

“There’s this underlying pressure that if you move something online suddenly it has the capacity to reach millions of people so you have to reach millions of people,” she explains. “We had conversations about whether to seek promotion from Twitch, do we see if we can be on their front page for some of this? We decided consciously to not pursue that. While quantitatively in terms of statistics it would have looked great to say, ‘Oh we reached this many people’, actually if you have a chat that has that many people it drastically changes what the community experience is.”

“When I go onto Twitch streams and the chat’s just flowing past, even if it’s not intimidating chat, it’s this feeling like you’ve stepped into a loud, busy nightclub. Whereas if it’s a smaller group of people then it’s like, ‘Okay, it’s okay for me to come in here’. That was something we were really conscious of, thinking about the scale of the events – to ensure that it could be collaborative and to ensure that people could feel comfortable in those spaces.”

This idea of the internet generally being a ‘loud, busy nightclub’ was something Foulston noticed people in her professional and personal circles talking about in the first few weeks of lockdown – expressed as a sense of there being too much content.

But rather than thinking of online content creators – whether they’re individual artists or organisations – as being in competition, Foulston’s keen to bring the comparisons back to the way our cultural scenes operate in physical spaces.

She says, “It’s strange. The numbers that you’re asked to achieve online are radically different from what you’re asked to achieve in a physical space. If we hosted a Q&A in a physical space and we had a hundred people turn up, then for us it’s like, ‘Great, that’s a win!’ but if you have a hundred people watch a video on YouTube that’s considered a bit embarrassing, there’s the assumption that they probably all came across it by accident.”

“With Now Play This At Home we were really conscious that we didn’t want to do a broadcast event – we didn’t want it to be this platform of us preaching from the one to the many, we wanted to retain interactivity and we wanted to retain conversations amongst a community. The question, for me, is; is it genuinely that there’s too much content or do we need to shift our ideas of who our content is for?”

“Instead of us thinking about when you start a podcast it has to reach thousands of people, well actually if I start a podcast and only a handful of my friends engage with it does that mean that it’s not worth the time that I’ve put in? Yeah this isn’t going to pay the bills, but if it’s helping me communicate or is a means of creative or intellectual expression, isn’t that okay?”

Overall, for Foulston, curating Now Play This as a remote festival has forced her to question whether current, traditional ideas about presenting art are appropriate in our current situation – as well as highlighting the importance of working with creative practitioners who have lived experienced of and are experts on accessibility issues.

“There’s this whole range of people who have this experience and are the people that we should be looking towards,” she says, “The biggest takeaway for me has been being pushed to confront, at a fundamental level, questions about what on earth an exhibition actually is. I don’t think we should be rushing to move things virtually just for the sake of it. We should consider, with the same curatorial rigour that you would a physical event, what the audience is, what your community is, and what you’re actively trying make happen.”