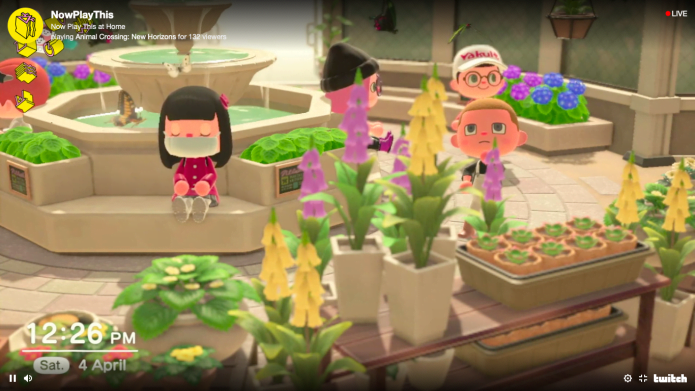 Earlier this month art critic Gabrielle de la Puente from The White Pube met up with the creators of Untitled Goose Game, House House, inside the Nintendo Switch game Animal Crossing: New Horizons. Part of Now Play This – an annual festival of experimental game design – the interview brought up questions of how art organisations and institutions can adapt to the ongoing global pandemic, as well as discussion around ‘going viral’ and how to approach games journalism as an arts writer.

Our festival communications officer Ana Hine caught up with de la Puente to discuss the experience.

Looking at the original programme for Now Play This 2020 I don’t see a similar event to Live From Animal Crossing. Had you already been in talks with Now Play This or were you approached when they made the decision to go virtual?

The original plan was to do this in person because House House were due to come to the UK for the BAFTAs, but with everything on lockdown they never made it and we all moved online instead.

Whose decision was it to have the interview in Animal Crossing? I’d never seen anything like it, it was very cool. How did you find the setting as an interviewer and as an arts journalist? Are you enjoying playing the game personally?

Now Play This suggested the interview take place in Animal Crossing, which was a bit of a dream come true. I like it when interviews with creatives are bound together with an activity, something to watch while you’re listening or something to listen to while you’re watching. In the past, The White Pube produced some pilots with HP Parmley for a series we called Art Dates, which involved speaking to artists while we went on a dog walk or were getting a haircut.

I really liked it but we didn’t get funding to take it forward unfortunately. This felt close to that. I have clocked in upwards of 75 hours in the [Animal Crossing: New Horizons] so far because it’s helping ward off any quarantine depression, so it felt comfortable to be in the game and doing the interview at the same time. I think as an interviewer, it gave me a good shield too. I was at my desk with pages of notes spread out, some cookies, a big bottle of water and of course I was wearing pyjamas – this was all preferable to say, interviewing Turner Prize nominees under bright lights in a busy room of 200 people.

What advice would you have for art critics and curators at this time, who may be needing to re-think their practice and approach to take into account the cancellation of, essentially, the entire 2020 cultural calendar due to social distancing guidelines?

I don’t quite feel like I’ve settled into quarantine enough to make this a once in a lifetime productive, creative residency. You know, people are dying, people are scared. I don’t think I have a lot to contribute to The Discourse right now. If I have anything to say it’s give productivity a break for the time being and then when you are ready to get back into it (once you’ve looked after yourself enough to have that headspace again).

We all need to be reading Crip Theory and speaking to disabled immunocompromised people who might have bouts of staying home outside of state-imposed quarantine. What should curators have already been doing to deliver content to the people who can’t visit their galleries? Is their work online? If it is online, is it accessible? What have they made that can be adapted to make it accessible, and do they have funding to make that happen?

There is also something very uncool about arts institutions suddenly trying to use social media, when they should already have young and experienced people on staff to do that work.

How has this situation helped you think about your accessibility policies and how do you think we can all tackle digital literacy and access in the next few months?

There should be free internet across the country and everyone should be given a smartphone and shown how to use it, especially in case of emergencies like right now when many can’t get to libraries to use computers.

I believe you said during the stream that you’re not super familiar with games journalism but you’re starting to get into it?

I am growing really tired of the exhibition experience as a visitor, and I know that I get so much more out of games. My art criticism is bending towards game writing, and I think I am going through all the waves of imposter syndrome and like I’m encroaching on other people’s territories as happened with the visual art specific stuff when we began our website. I was just easing into it and also trying to persuade our audience to allow me to go this way, and now it’s kind of funny that the only thing I can write about in isolation is video games. The decision’s been made for me, kinda, and I’m glad.

There were some technical difficulties during the interview – do you think we’re just all going to have to get used to that happening, or do you think this current lockdown might be an opportunity for the development of improvements to the way we operate online?

God, I have no idea about this. I can’t imagine a world without technical difficulties but of course it would be good if they were no more.

There was a point in the stream where you talked about growth as a mindset and how both for yourself and Zarina [Zarina Muhammad, the other half of The White Pube], and for the guys behind Untitled Goose Game going viral has forced you to think about what a sustainable level of success and activity looks like. Can you expand on this a bit?

We started our website as a little joke but a few months in we found that readers and artists really valued our writing, found it useful, that it was a different perspective on the arts experience because it was coming from a working class voice, a brown voice, and from two young women. We started to care about it because other people started to care, and I think it took us a bit of time to understand how powerful it was to have an audience at all – like, we could start to put pressure on individuals and institutions to change for the better because we had their backing and this image of being Big and Strong. But we were still just writing on laptops in bed, without an office or funding or any material resources. We had some soft power because we had people’s attention.

And there was definitely a breaking point when people who also wanted to write about art started to demand that we shared our resources with them, and they wouldn’t believe that we had nothing to share. And in the same push, people demanded we allow them to write for us, but we don’t know anyone well enough to open that up to them (and every time we’ve dipped our toes in and tried it, it’s caused a lot of behind the scenes problems). I think the only way we can sustain this is to keep our day jobs, keep up the schedule of one upload a week, and most importantly keep this just the two of us. That keeps it protected, means we can control the way it moves and the politics it’s putting out into the world; and means we are only ever speaking on behalf of ourselves, which is the way it should be.

Is there anything else you’d like to add? I see that The White Pube has a Patreon, do you think crowdfunding platforms like that are a way people should go if this lockdown and social distancing continues in the way it’s expected to?

I want to add that corona stress is making it difficult to write and I hope this was useful! We have a Patreon that didn’t really take off the first three years we had it, but mid-2019 people started to subscribe en masse and I’m so glad – it is an absolute lifeline right now because I’m out of work otherwise due to the quarantine. It is a real life-saver and I am already seeing people start accounts on there during isolation, and I wish them the best with it too.

Follow and support The White Pube on Patreon at www.patreon.com/thewhitepube.

You can watch Live From Animal Crossing here:

Watch Live from Animal Crossing – House House in conversation with The White Pube from NowPlayThis on www.twitch.tv