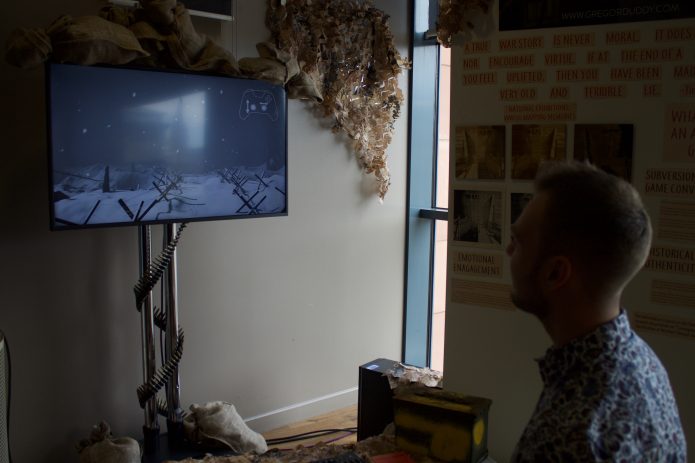 The Abertay Digital Graduate Show may be small, but it offers an opportunity to see how students become professional members of the videogames industry.

‘1915’ is a quiet game with minimal interaction. You wander the trenches in the aftermath of the Battle of Loos, uncovering snippets of memory.

Gregor explained: “It’s less a game and more of an interactive museum. 1915 is thought of as the forgotten year so it’s my way of giving commemoration to the year.

“It was quite difficult to find out what happened at the battle because so many people got killed. I think every Scottish battalion was represented.”

The game was recently picked up by a Glasgow based art initiative, Lateral North, and the Scottish Government have also shown an interest with a planned exhibition at the National Museum of Scotland.

According to Gregor: “A screenshot of my game will be depicted in a large abstracted 3D map of Scotland which contains a hundred stories of Scotland during the war – mine being the Battle of Loos and Dundee’s own Fourth Battalion Black Watch.”

‘Kinoko’ meanwhile allows the player to become a small forest spirit, tasked with ending winter and bringing forth summer. It’s relaxing to play, challenging enough to be interesting, and leaves you feeling as if all is right with the world.

Designed by a team called Thunder Lime which includes this year’s graduating students Emelie Edholm and Sara Leone, the game can be played in its entirety as part of the show and will soon be available on Steam and itch.io.

Sara Leone is also part of the team behind ‘Lost Myths: Sons of Ragnar’ a historical VR experience telling the story of the Viking Ragnar Lothbork and his sons.

Sara explained: “Most of the Norse myths are just passed down as stories, but that’s what makes them interesting because you don’t know which bits are the truth.

“We used the Saga of Ragnar, and took inspiration from the new God of War game and the TV series Vikings. We also tried to go to the real locations as much as possible, such as the Jorvik festival in Yorkshire where we got the battle sounds used in the game from.”

Showing research is an important part of the show, with almost an entire room dedicated to character design – including non-binary avatars made by Robin Lawrence – and characters inspired by sushi, ice-cream, and sweets.

Other intriguing works include ‘Buddy: A Family’s Memories’ made in memorial of a much loved family pet that recently passed away, and the card game Witchy Business by Steven Crighton and Luke Fornari.

The show will be on at Abertay Student Centre in Dundee from Friday 10thof May until Tuesday 14thof May, with a preview event on the Friday evening from 6-9pm. Entry is free.