Sekai Machache is an early-career artist based in Dundee, Scotland. Her multi-disciplinary practice is based on an interrogation into the notion of self and utilises a range of media including photography. Here she speaks to Ana Hine about her Zimbabwean background, the idea of Double Consciousness, and her current show Unhu at Nomas* Projects on Ward Road.


What’s your connection to Shona society? I understand you’ve been to Zimbabwe‎ a few times now, how has that informed your art practice?

I was born in Harare, Zimbabwe and my maternal and paternal ancestors are Shona people. Shona denotes the language my family speak and the people I come from. This does not in itself denote nationality as there are other groups that live in Zimbabwe. Although I’ve been raised in Scotland and also consider myself Scottish.

What is the Shona philosophy of Unhu? How did you decide upon that as the title of this show?

Unhu has been translated by John Mbiti as: “I am because we are and since we are, therefore, I am”.

The traditional Shona society celebrates connectedness and cohesion. Before British rule, the society did not elevate the individual and did not see him/her as solitary and unbound. Unhu akin to Ubuntu in South Africa, is a social philosophy that embraces the ethical values of generosity, consideration and humanity towards others and community. Mutual assistance, humility, industriousness, co-operation, hospitality, solidarity and social cohesion.

The work displayed in the Unhu exhibition with Nomas* Projects is a culmination of several series of mine. Each series speaks of an aspect of identity and the fabrication of a notion of self. I’ve been interrogating this notion of self for many years in my practice and have come to the conclusion that it is constructed and derived from the concept of individuality which my ancestors did not wholly subscribe to. They understood each of us belongs to the community, to the culture, and as such our ‘sense of self’ is naturally derived from our connection to others. Through bringing these fractured and fabricated selves together at Nomas* projects. I am reconstructing and consolidating them as an exercise in remembering what has come before and where I intend to take my practise in the future.

This is the first time works from your Kin project have been exhibited, how has the project developed?

Kin was photographed as part of my undergraduate degree show but was never incorporated into the final composition of the show. A piece titled Blink from the series was shown alongside my Eigengrau, In the moment of waking and Visions of Half Sleep series.

Kin was previously displayed in a photo-book, has been in publications and has been previously shortlisted for the Jill Todd award 2012.

The Kin series has always been utilised in my practice as an example to show the aesthetic concerns of my practice. The Unhu exhibition at Nomas* projects was a great opportunity for me to finally show a piece from the series in its printed form. I’m glad I chose to do this as it is one of my favourite series. 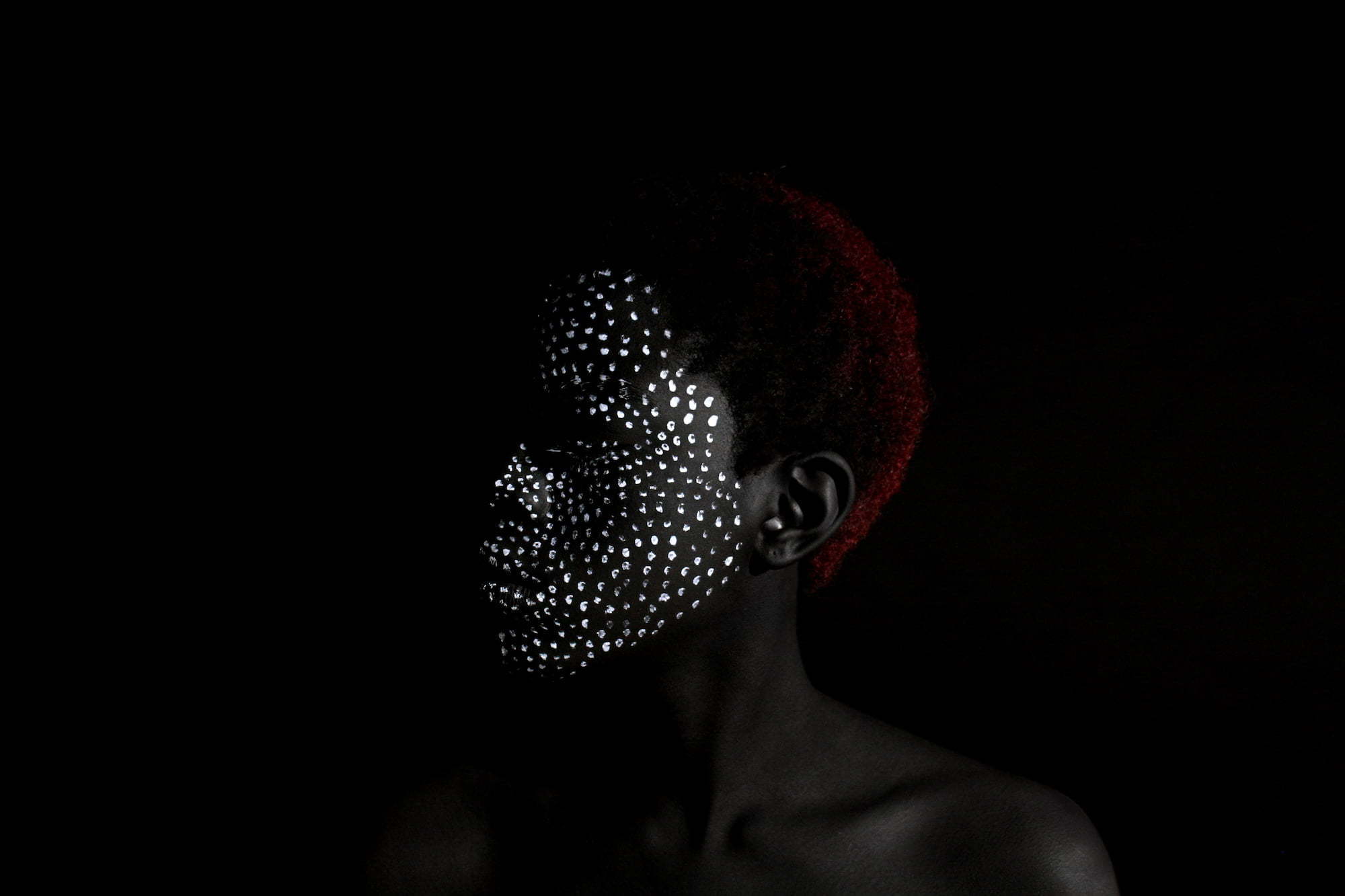 Your undergraduate thesis Blackness in Contemporary Art questioned whether blackness is a hindering factor in the creative process of artists of colour. What were your conclusions?

At the time of writing my dissertation I had experienced being the only black person in my primary school, high school and art school. I was acutely aware of the impact of racism and sexism on every aspect of my education since I was a young black girl and art school was no different in this respect. I did not shy away from difficult discussions on the subject but as I was isolated in my experience it was a difficult and lonely space to inhabit.

My dissertation was an attempt to find an answer to the questions that had plagued my time in education around what it means to practice as an artist of African descent in the West. I read and watched interviews from well-respected African and diaspora artists such as Yinka Shonibare, Kerry James Marshall and Wangechi Mutu. These artists had experienced a lot of the same issues that I was myself experiencing. I was in the early stages of understanding my position in the wider context of the Western art world.

The realisation that my position in the art world was already pre-determined as the Othered artist was a difficult pill to swallow, especially when I had been through the same education system as my white peers. It was frustrating to say the least. My dissertation tackled this question head on and my conclusions were based on my findings at the time which was that it was imperative to hold the position and resist othering and tokenism in order to create space for the next generation of black artists.

Blackness is not the problem here of course. Blackness can never be a hindering factor in the creative process of artists of colour because it is our very blackness that makes us unique, allows us to speak from several points of experience and to be adaptive and progressive in our approach. We create from a position of resistance.

To quote Alberta Whittle in her Meet the Artist talk during the opening of her current DCA show, “I refuse to sit in an abject position”.

I’ve realised that it is Whiteness that has positioned and maligned the experiences of artists, writers, musicians, scientists and all other professionals of colour. It is white supremacy that has made my artistic practice a space of constant refusal, resistance and protest. My conclusions back in 2012 in a position of alienation, isolation and with little to no institutional or peer support have evolved.

I now work with other artists of colour on a regular basis and through understanding their practice and through collaboration, mutual respect and self-respect I have now revised this position. I will hopefully write a follow-up to the dissertation in the future.

How does your work help to show black women as vulnerable, gentle, open and compassionate? Why do you think these characteristics are not generally associated with women of colour?

I think this question relates specifically to my Invocation series. Invocation was based on the Western mis-interpretation of the goddess Kali Ma of Hinduism. Kali is depicted as having pitch black skin, red hands and a lolling red tongue. She often is shown holding the decapitated heads of slain warriors and rests her foot on the chest of her consort Shiva. Kali is, despite her visage, a deity that represents the Divine Feminine in one of her most radical and deeply profound forms. She is indeed a force to be reckoned with. However, Kali has been mis-represented for many centuries through the Western gaze as being merely a force of chaos and destruction.

The series aims to invoke and re-frame Kali’s image, showing a vulnerability and openness that is often overlooked. I do this in order to simultaneously show this vulnerability in myself and by extension other black women who have also been maligned in this way. Black women (in particular dark-skinned black women) are often represented by stereotypes including the ever exhausting “Angry Black Woman” and we are often labelled aggressive which offers us much less space to convey a wide range of human emotions. This is, in my experience, a stifling and impossible to navigate position and I feel that this mis-representation is one that must be deconstructed. I attempt to begin this deconstruction throughInvocation.

Can you explain a little more about W.E.B Dubois’ notion of Double Consciousness and how it influences your work?

Double Consciousness is a theory that speaks about the psychological effects of living in the Western world as a person of African heritage. The constant oppression felt by the descendants of slavery and colonialism in the West and how this splits the psyche into two distinct aspects.

One aspect is always attempting to assimilate into white structures while the other aspect is acutely aware that it does not belong to and cannot be served by these structures and is always resisting assimilation.

Can you tell us a bit about the Yon Afro Collective? How can people join if they’re interested?

Yon Afro Collective is a collective of black women based in Scotland focused on centring their experience of blackness through collective activism and collaboration with the purpose to create a sense of belonging.

The collective exists to encourage the sharing of lived experiences through creativity, political activism, collaboration and collective working. It has offered hope for a sustained future of a black community in Scotland.

Yon Afro Collective is fully inclusive in its approach and welcomes black trans, queer, non-binary, disabled members from all faiths and religious backgrounds. The collective welcomes support from our allies and community of collectives of colour in Scotland and beyond her borders.

You can find out more at www.yonafro.co.uk or email us at yonafrocollective@gmail.com.

What’s been your involvement with the Alberta Whittle exhibition at Dundee Contemporary Arts?

Alberta Whittle is a chosen family member and mentor. I was asked to contribute my voice to the film titled From the Forest to the Concrete to the Forest which opens with a quote from Octavia Butler’s incredible novel, The Parable of the Sower. The film can be viewed as part of Alberta’s exhibition How Flexible Can We Make The Mouthat DCA.

Thank you to NEoN for getting in touch and offering me space to give more detail on my current Nomas projects exhibition and thanks to Nomas* projects for giving me the opportunity to show my work in Dundee.

Unhu runs at Nomas* Projects until Thursday 26 September. Nomas* as a gallery is in the windows of 9a Ward Road, Dundee, DD1 1LP and is therefore available to view anytime.