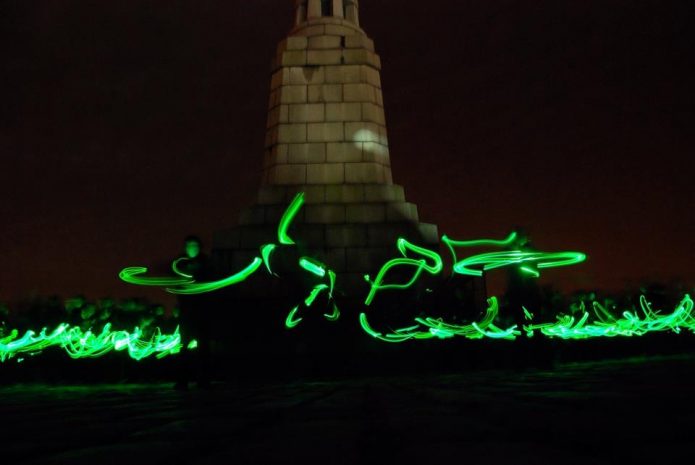 As you may have seen from our Twitter ramblings, preparations for NEoN have already begun; that’s right, our groundwork can often turn into a bit of a marathon but our stalwart crew are dedicated to the NEoN cause and we cannot wait to show you the fruits of our labours…only 10 months to wait!

Whilst we count the days and indeed hours until the next NEoN extravaganza I thought it might be interesting to reminisce about the ghosts of NEoN past and catch up with our motley crew of contributors and collaborators who have teamed-up with NEoN over our past three festivals.

A NEoN favourite, Aki travelled over to Dundee from Japan for NEoN 10 and delighted audiences with his fun and playful style.Since leaving us in 2010 Aki has teamed up with the NEoN creative team to create the Law Hill toy which made a debut at NEoN11 and can now be found upstairs in the DCA shop. A self-confessed ‘draw-o-holic’ Aki uses bold colours and simple shapes and has created animations for major TV projects such as Coca-Cola and Nickelodeon’s ‘Yo Gabba Gabba’.

Many of you will remember Pictoplasma’s crazy characters running around the city during NEoN10. Since then, the Pictoplasma team has been exhibiting, publishing and generally being awesome. The creative team take part in character based festivals in their hometown of Berlin and also in New York. They have recently exhibited their work in an exhibition in Paris which features post-digital flat and friendly monsters! July 2011 saw the release of the ‘Not a Toy’ book which examines the growing use of character design in fashion and art and is available to buy online here.

James got our minds racing after his intriguing talk which formed part of NEoN10. James, an artist and interaction designer works with augmented reality, interactive installations, generative art, mobile apps, 3D printing and data visualization. After hosting one of our NEoN 10 interactive workshops and appearing in our NEoN 11 line-up, James has been busy working on several exciting projects. His latest venture is a collaboration with Keiichi Matsuda; ‘Cell’ is a Windows Phone version of Composite, an app for the IPad, which allows you to paint and create collages and overlaid images using a live video stream. James has also released Konstruct, an augmented reality app and ‘Fracture’, an app which allows you to create Cubist paintings including self-portraits from the image gallery on your phone. For more information about what James is up to take a look at his blog here.

I wish I had time to mention all our past collaborators and conspirators, but after three festivals there is simply not enough time to mention them all. Stay tuned to the NEoN website over the coming weeks for exciting announcements and juicy gossip about what we have planned for this year’s festival, it is going to be marvellous!