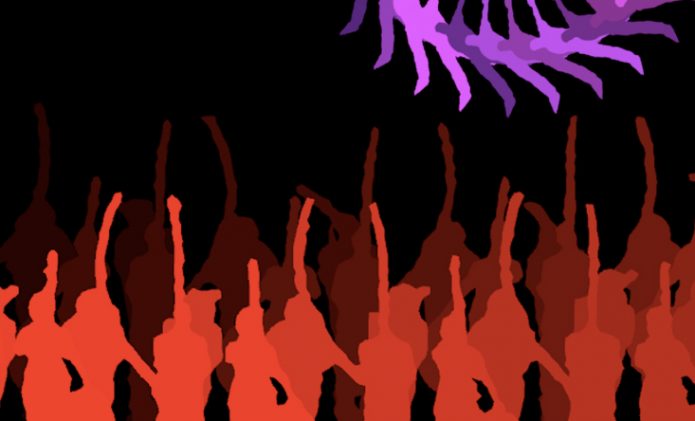 If machines could see us what would they think we were up to? This was the question that floated through my mind at various points during the NEoN Walking Tour, as we meandered across Dundee in our winter coats to see the delights of the NEoN Digital Arts Festival 2016.

The night began with a question: what does the world – and more importantly, humanity – look like from the perspective of our machines. This was the central conceit of ‘All watched over by machines of loving grace’, the current exhibition at the Hannah Maclure Centre and the first stop on the walking tour.

One answer was; shaky. Both Tom Sherman’s ‘Learning to see the laboratory where the robot is programmed to work’ and Ruth Kerr’s ‘Becoming Cellular’ featured footage that jerked and panned in a disjointed, but charming way reminiscent of the Mars rover’s own camerawork.  Inspired in part by Adam Curtis’s dystopian documentaries and the poetry of Richard Brautigan, the exhibition had an odd, but enticing tone. While some work, such as Miya Hayashi’s ‘Shiki-On’, were playfully childlike in their simplicity, other pieces emphasised how ‘other’ the programmed machines we build can be. Questions of agency, agenda, and consciousness were raised amongst the wine-quaffing crowd and it felt like we were moved onto our next venue a little too soon.

As we made our way to the Visual Research Centre (VRC) the Travelling Gallery was parked on South Tay Street so we boarded one small group at a time (it’s not a large bus) and played with the virtual reality headset, resisted touching the gorgeous glass globes of water suspended in ~ in the field’s kinetic sculpture, and had a preview of Charles Young’s delicate architectural art. We’d passed the NOMAS*Projects window space on Ward Road, a collection of digital prints that are sure to bring a bit of joy to pedestrians throughout the week.

Ideas of architecture are central to this year’s NEoN festival, with the official tagline being ‘The Spaces We’re In’. At the VRC the design of the space itself meant that we first observed the two displayed cityscapes from above, before descending down to a more immersive level.  Charles Young’s ‘Paperholm’ and Stanza’s ‘The Nemesis Machine’ both offered radically different interpretations of a cityscape, but complimented each other beautifully.

Young commented: “I think it’s nice seeing two quite different ideas of what a city can be. I hope mine is the more positive side.” His tiny paper buildings were certainly captivating, especially for the children present. The piece was so quaint it took some of us a while to realise the little boat a gallery assistant was pushing around the display contained a camera, which was live-streaming the evening from its miniature, knee-high perspective.

‘The Nemesis Machine’ was also watching, responding to sensory data within its environment by lighting up its tower blocks. With its exposed circuit boards it seemed almost as fragile as ‘Paperholm’, but much more sinister.

With the themes of space, architecture, and alienated machines now firmly on our minds we made our way across to West Ward Works on Guthrie Street; a freezing building that used to be a printworks and book binding workshop for DC Thomson.  Fortunately, paper mugs of mulled wine were provided; allowing us to explore a number of large-scale installation works from internationally acclaimed artists such as Brent Watanabe, Monica Studer and Christoph van den Berg, and APO33.

Like any good digital arts festival there was an element of interactivity. We took turns sitting in the driver’s seat of Aram Bartholl’s car listening to the obscenities of YouTube gamers, became animated pink balls being hunted by drones, dropped garbage, and tried to create a soundscape with our brainwaves. It was fun, thought-provoking, and a stimulating aesthetic experience all round.

And while I never really felt any of the art pieces were ‘alive’, sharing space with them certainly gave me an opportunity to reflect on how technologically dependent and interactive our lives have become – and how much there still is left to explore.

NEoN digital arts festival is on until Sunday November 13, with the exhibition at the Hannah Maclure Centre continuing until Friday February 24. For more information see this year’s programme