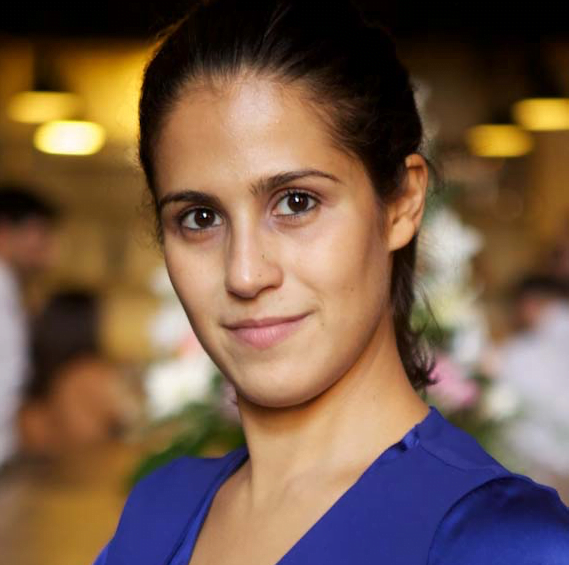 Laura Leuzzi is an associate curator at NEoN digital arts festival and a research fellow at Duncan of Jordanstone College of Art & Design (DJCAD). She is organising the Nomas* projects exhibition, which will feature Italian artist Valentina Bonizzi ‘s work on the Dheisheh Refugee Camp. She is also co-organising this year’s NEoN Symposium alongside Joseph DeLappe. Here she shares her thoughts about curating and how her professional interest in feminist video art has shaped her career.

How did you get into curating?

Well, I got into curating when I was a PHD student at Sapienza – the University of Rome…and working in exhibitions as an early career art historian. Initially the request came from the artists I was working with who started asking me to curate their exhibitions or the production of their artworks. It came from them initially.

In the course of the years I focused on working on innovative curatorial platforms including for example Self/Portraits(Visual Research Center, DCA) curated with Giulia Casalini and Diana Georgiou from the queer feminist organisation CUNTemporary (who will join us for the NEoN Symposium). The Self/Portrait format was inspired by two Italian feminist radical thinkers Carla Lonzi and Adriana Cavarero. The title echoed Cavarero’s book Relating Narratives: Storytelling and Selfhood(2000), where an exploration of identity is framed as the desire to hear one’s story narrated by an other. 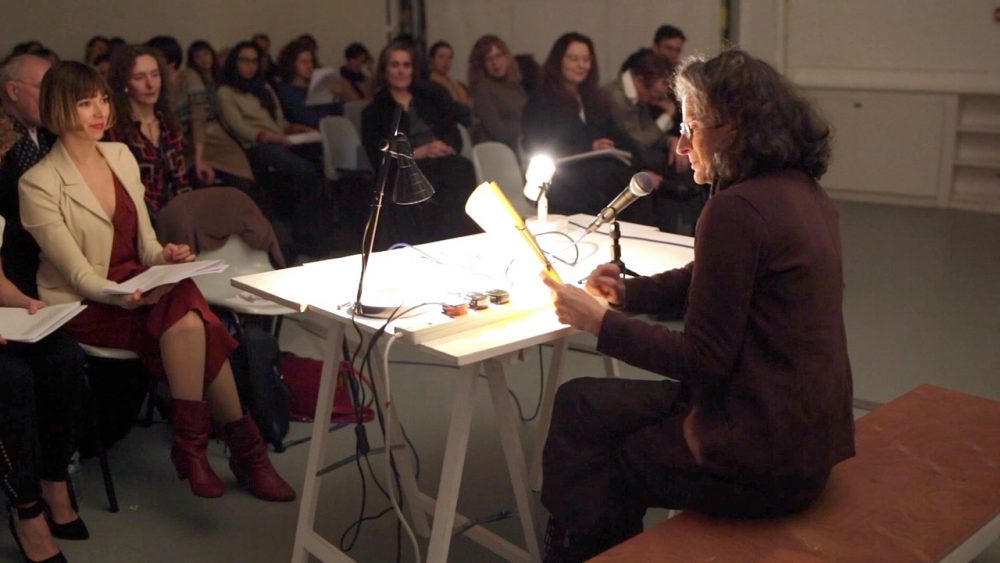 Your research explores early video art, art and feminism and new media. What have you learnt?

In the past few years I have been a researcher on REWINDItalia (DJCAD, University of Dundee, 2011-2014, led by video pioneer Stephen Partridge) and EWVA (2015-2018, DJCAD, led by video pioneer and print maker Elaine Shemilt) that have explored respectively the histories of Italian video art and the early women artist’s video in the 70s and 80s. Video art has also been the gateway to explore new media, and in particular the obsolete ones.

From both projects I have learnt how to investigate and re-mediate marginalised histories and to integrate what is left out from mainstream history and textbook with archival research and oral memories collected through interviews. I have learnt that what seems to be lost, sometimes could be recovered or at least narrated or reconstructed and that there is never one “history” but many “voices” which are at risk of being permanently lost and that is up to us to recover.

How does curating give you a chance to React?

I think we can find ways to react to what’s going on in the world by trusting that every little gesture, approach or attitude can make a difference, a change. Curating allows me to tackle problems that I feel are particularly relevant from a political and societal point of view, as well as allowing me to engage with artists and different audiences, discuss emerging issues, research and try and contribute to make a positive change, starting from my community of colleagues. Ultimately my curatorial practice allows me to grow both professionally and from a human perspective.

For example, last year I co-curated with Iliyana Nedkova the first solo exhibition of Dutch video pioneer Madelon Hooykaas at Threshold artspace, atHorsecross Arts in Perth. The exhibition dealt with issues of sustainability and urban renovation specifically regarding the city of Venice. This experience gave me the possibility to engage with these topics together with the artist and the co-curator Nedkova, with practitioners in the art field as artists, curators and cultural producers and with the wider audience. The exhibition stimulated the sharing of a series of dialogues on sustainability in Scotland as well as exploring ideas, thoughts and feelings regarding environmental exploitation and climate change. I have started my collaboration with Nedkova for the 2018 iteration of 3G celebrating International Women’s Day with feminist performance and video art and recently I curated the exhibition Federica Marangoni. Elaine Shemilt. Parallel Dialogues through Video and Timeat Casa Goldoni in Venice (5 Sept-20 Oct 2019). That exhibition will tour at Threshold artspace, at Horsecross Arts in Perth in 2020, expanding on this Italo-Scottish dialogue.

A theme I have been focusing on in the past few years is art and feminism. In particular I have curated a series of screenings and exhibitions and authored several articles and essays with the aim of supporting the recognition of early women video pioneers to the development of video as an artform in Europe. The latest result on this was the book European Women’s Video Art in the 70s and 80s(John Libbey Publishing 2019), edited by myself, Elaine Shemilt and Stephen Partridge, from the eponymous AHRC funded research project at DJCAD, University of Dundee.

For example, for Neon 2017 I co-curated with Dr Alexandra Ross and Gayle Meykle an iteration of their Polyphonic Essay on Memory.This performative curated screening explored how women video artists have engaged with historical and personal memory in the 70s and 80s with a feminist approach. 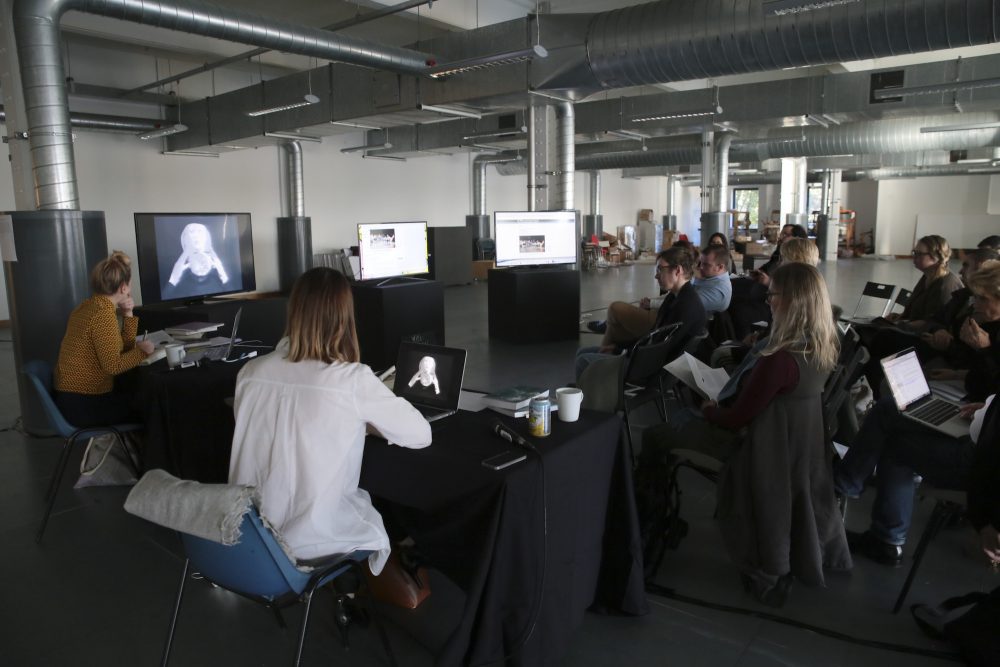 How is the Nomas* exhibition coming along? Can you remind us what Nomas* Projects is and why it’s exciting to be working with Cully McCulloch and Owen Daily?

Nomas* Projects is a non-profit contemporary art gallery based in a four-windows space, in 9A Ward Road, Dundee. Since its inception, Nomas* – run by local artists Cully McCulloch and Owen Daily – has been building a lively national and international visual arts programme with the aim of engaging and involving the local community and contributing to the cultural growth of the city.

It has been very exciting to work with Cully and Andrew as they have decided to dedicate 2019 to women artists. We have invited Italian artist Valentina Bonizzi – who received her PhD from DJCAD in Dundee and currently resides in Albania – to present for the first time her work Opaque Documents, which is the result of a series of residencies conducted by the artist between 2014 and 2016 in Palestine.

Focused on mapping the presence of photography in the Dheisheh Refugee Camp – where Bonizzi lived and worked within the program Campus in Camps and the resident community – the work unravels the nature of photography as a record of the everyday life resistance in context of conflicts and territorial occupation. 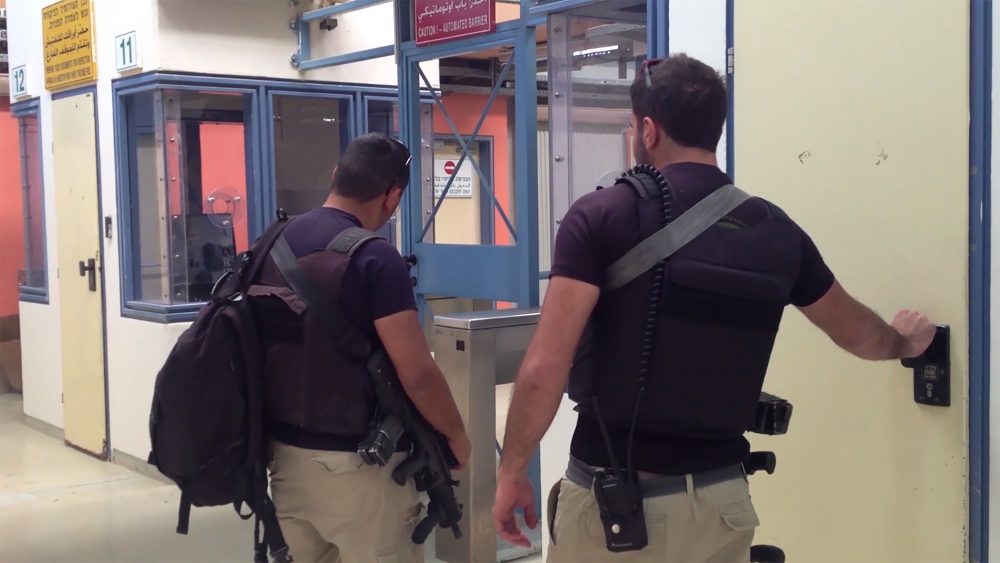 Valentina Bonizzi, Is it yours? Still from video, courtesy the artist.

You’re co-organising this year’s Symposium with Joseph DeLappe, how is that going? Can you reveal who the keynote speakers are or what some of the topics will be?

This year Joseph DeLappe and I were very honoured to be awarded funding from the Royal Society of Edinburgh, DJCAD (University of Dundee) and University of Abertay to co-organise a symposium that expands on the annual NEoN mini symposium, which is being co-chaired by Sarah Cook.

This year’s theme – REACT – has been the stimulus to engage with different forms of activism, contexts, mediums and topics spanning from the climate change crisis to the refugee emergency, AI to surveillance, LGBTQ+ rights to feminism. I guess that in such a complex and difficult time at a global level, we aim to explore and discuss some of the most compelling and relevant issues that we are facing as artists, curators, theoreticians and designers, looking back to the past, investigating the present and aiming to initiate conversations and dialogues for future contributions.

How do we protest differently in a digital age?

Social media allow marginalised groups and minorities to be heard at a global scale. They help people connecting with unprecedented speed and reach. They provide exceptional platforms to reach out beyond our everyday community.  Social media are available to everyone, and the temptation is to limit our activism to the internet sphere. Yet, they expose us to a certain degree of risk: our data and our actions on social media can be manipulated and harvested by companies and political groups. To enhance impact of our “re-actions”, I believe that sometimes taking the protest to the streets is still the only way to be heard…