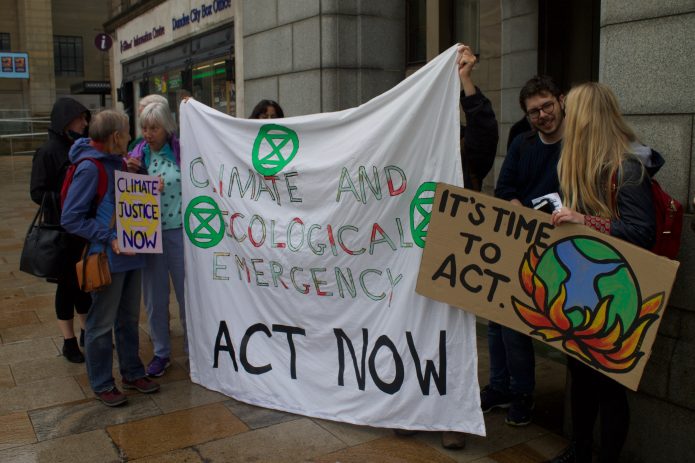 As NEoN’s theme this year is React we’ve been looking at some ways that ordinary people in Dundee are reacting to global political issues like climate change.

After an intervention from the local branch of Extinction Rebellion, Dundee City Council agreed to declare a state of Climate Emergency at a meeting on Monday 24 June.

Extinction Rebellion is a relatively new social-political campaign committed to using non-violent action to protest against the perceived apathy of governments and corporations in the face of ecological collapse, biodiversity loss, and climate breakdown.

After a public protest in the city square, local Extinction Rebellion members directly petitioned the council via deputation (the act of appealing to the council in person during a committee meeting). Michael Cummins approached the council to say: “It is widely recognised that there is a climate emergency and cities have a key leadership role in addressing it.

“This council, in the light of the scientific facts, must do what is necessary, not what is deemed be politically possible.

“There are billions of individual humans at risk, and millions of species of plants and animals that we can save. All it takes is ambitious courageous actions on the part of us, our policy makers, our councillors, our MPs and MSPs and our governments. If they have the imagination and ability to aim for a better world, then it is possible.”

He, and fellow member Clare Brennan, requested that a Climate Citizen’s Assembly be formed in Dundee – to consider evidence presented by the council and other independent bodies and then to access what actions could be taken to “avoid ecological collapse”.

The council agreed to the idea of a Climate Citizen’s Assembly in principle, with Christina Roberts of the SNP saying: “Dundee’s already been seen as a national and international leader on greenhouse gas emissions, so I think a Citizens Assembly is a great idea and I would be interested in being part of that. I hope everyone will get behind it.

Words and images by Ana Hine.