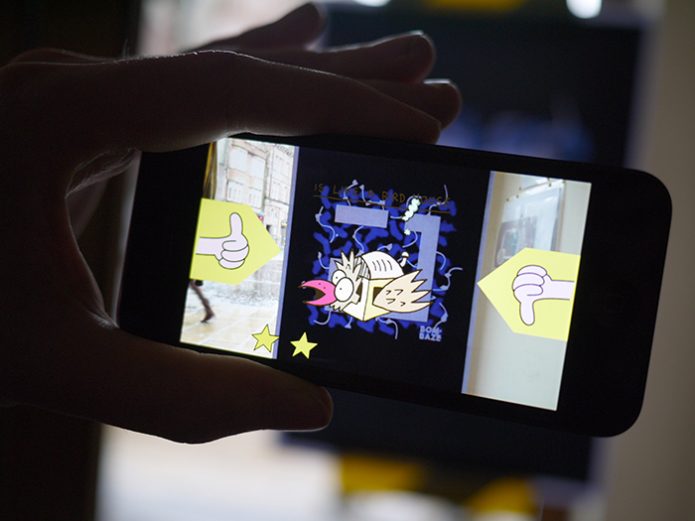 As the NEoN 2012 digital arts festival is drawing closer we have decided to release a small burst of what you should expect to see. We have caught up with Jaygo Bloom creator of ‘Bombaze’ a digital gameplay app made especially for Dundee. In this interview we asked Bloom to describe the app in more detail, how it works and what were some of his motives for creating the app.

[NEoN] Can you give us some background about yourself any training/education you have in this area and some of your first major successes?

[Jaygo] I am an artist and designer born in Manchester. I spent most of my formative years working alongside various Art collectives in Glasgow. After a string of successful events worldwide as member of the audiovisual team Pointless Creations, I moved into large-scale creative projects including, designing the tour visuals for Scottish Rockers Franz Ferdinand, developing networked art installations and digital performance tools for the production of realtime graphics. I studied moving imagery and interaction in the MSc department at Duncan of Jordanstone School of Art & Design. I have always been enamored at how creatively diverse and rich the Dundee art community is and my involvement with this community, led to the opportunity of a major solo show held at the DCA in November 2010.

Currently I divide my time lecturing at Norwich University of the Arts, continuing my professional practice and the production of live graphical performance for the seminal Techno Act – Planetary Assault Systems.

More recently I have embarked on a collaborative project with the artist Gereth Bayliss. Part performance and part intervention ‘Balloon Drop’ is about the success of one hit wonders and celebrating the moment and will launch early next year, traveling nationwide.

Can you give us a overview of what you are going to be presenting at NEoN and why you think it ties in with this years NEoN themes of movement between virtual and reality environments?

Sure! Its an iphone app entitled ‘Bombaze’. It started off originally as an idea to create an engaging way for NEoN festival goers to interact with a series of augmented artworks positioned around the city of Dundee. Its premise, bringing artwork out of the galleries and placing it public and accessible to all.

With all socially engaged, digitally mediated projects, I find the development phase the most critical, for Bombaze I called on design professionals worldwide to help provide a long list of considered gameplay outcomes, These outcomes are user selected and question the notion of augmented art and its relevance within public space.

What inspired your latest piece of work?

The notion of movement between the virtual and the real, is something I have constantly been at odds with and have addressed within a number of public artworks (worldwidewegg, 2008) (bump, 2005)

Personally I am uncertain whether contemporary society right now, has the faculties to deal with augmented reality in any form other than that of recreation and commerce. This is cause for concern as to benefit from any new form of integrated technology we need to take an active role in its development.

The ubiquity of emerging technologies, cloud based networks, and the pervasiveness of multiple layers of augmentation rapidly becoming commonplace in our city environment, sure enough creates novel experiences and new models of expression for its inhabitants, yet paradoxically most projects of this kind are promoted by global marketeers on the hunt for quirky sponsorship and corporate branding, this is what makes Bombaze so unique, and NEoN so special. Its an indie game developed by a team of artist and designers, which harnesses the powers of augmented reality for the social good.

Where can our viewers download your app from? And how is it used?

The game is available from the itunes app store and also for android, the link for both versions can be found on the NEoN festival website.

You use the app in combination with the game tags located around the city, whenever a game tag is viewed through the Bombaze app, the augmented animations come to life. There are a total of 15 game tags in specific locations, 5 of which are mystery locations, found by following riddles. 10 of these locations respond to positions on an updating street map, offering viewers the opportunity to see all the selections and choices made.

There are also demo game tags which are also available to use, these are available as postcards, stickers and online. Hold you smartphone up to one and give it a try.

Each of these tags has a ‘Like/dislike’ button, what insight do you think this will uncover about Dundee’s identity and values?

Each tag is used to pin point the game activity to an ever-updating street map. The likes and dislikes come into play when the augmented artworks are activated. Viewers can select their most favoured augmented characteristic for that particular location, these selections provide feedback as to what the players would really like to engage with and what they feel a technologically mediated experience could provide for them in that precise location.

These responses, I like to think could act as a pathway into the development of more permanent socially engineered artworks.

What things or insights can our viewers be able to obtain/view through the use of the app? Can you give us an example?

Players choose at random from the animated solutions selected by a panel of leading experts in the field of gameplay and interaction design, these solutions have been designed to engage with a wide audience and range in complexity, starting with simple interactions such as ‘is made from cubes’ ‘is silent’ ‘plays music’ ‘articulates’ to the more challenging ‘ will one day satisfy my every desire’.

What is your favourite animated solution and why?

Tricky question! I suppose it would have to be ‘breeds’, I like the idea that one day we will be able to generate digital interactions that in some way self replicate and breed, much like rabbits.

Mystery tags are hidden around various locations citywide, these are accessed via solving the riddles written on the Bombaze game map.

What do you expect your app will reveal about how people move in a city? Do you think there will be reoccurring habits and patterns, if so what do you think these will be?

Bombaze is in every way a game of social engagement. Eventually we will be able to discover those selections which have been outplayed the most and where, but right now I haven’t a clue what these will be and thats all part of the excitement in creating such a game. Lets wait and see…

Are people’s movements presented in any formal way back to themselves… such as a schematic? If so, how do you think participants will react differently from seeing how they move within the city?

Movement is not represented, the choices made at each game tag location are recorded on an updating street map, and available online to view.

How do you think Dundee’s tourist industry will benefit from this app?

If Bombaze can encourage those that play it to actively seek out the game tags and explore their surroundings it will be a resounding success. There are a great deal of intriguing locations hidden away down quiet Dundee streets, through gameplay festival goers will be able to access this rich history.

What do you think the locals of Dundee will find the most surprising about re-discovering Dundee in a new way?

In keeping with the fantastic heritage DC Thomson has afforded to the city of Dundee, the augmented animations, produced alongside Scottish game app design agency ‘Me and The Giants’ are all very comical and fun to interact with. I think this colourful explosion of digital media and comic gestures augmented over the landscape of Dundee will keep the locals very preoccupied indeed.