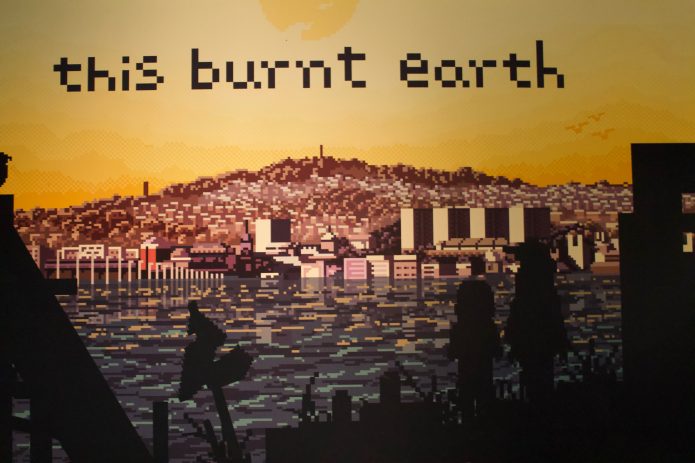 As part of this year’s Summer Of Games, the University of Abertay held their first ever Summer Videogames Show on Thursday 29 August, showcasing the work of their postgraduate students from the MProf Games Development course.

Of particular interest, given NEoN’s theme this year is ‘React’, was ‘This Burnt Earth’ by Team 3 – a narrative-led RPG set in what seemed to be a futuristic, half-submerged version of Dundee.

The story followed a girl called Eiladh as she searches for her brother. Dundee’s familiar seagulls make an appearance, although climate change has made it warm enough to have outdoor markets. There’s also references to the fall out from leaving the EU – such as food and medicine shortages – being felt even in the far off year of 2069.

The 8-bit graphics lend an old school charm to the game, as do small details such as bottles of Buckfast.

‘Coffee VR’ from Team One – the team names were not as imaginative as the they were at the Dare Academy Play Party in July – was designed to help young unemployed people deal with their anxieties around work, by allowing them to practice in a simulated coffee shop environment.

Lewie Bowie, one of the designers on the team, explained; “Our brief was to make something for 16-24 year old unemployed young people, and we had to make it a VR experience that mirrors real life. It’s going to get continued by Showcase VR and hopefully in the future it can help people.”

Aside from these more politically worthy games there were a few that were simply a lot of fun, with ‘Soul Blade’ and ‘Rotate Castle’ drawing crowds of spectators throughout the event due to their relative difficulty and pleasing graphics.

‘Rotate Castle’ follows a child trying to ignore his parents fighting by retreating to a fantasy kingdom. The mechanics required you to rotate the entire environment regularly as you attempt to travel the titular castle, giving a new level of difficulty to the 3D platformer model and requiring a strong stomach.

In aesthetic it was similar to ‘Shadebound’ by Amazing Catchy Games – a group of third year undergraduate students on an accelerated course. The most beautiful of all the games, it was laid out like a storybook. The player had to complete mini platformer puzzles to turn the pages and attempt to free a mysterious girl. The game is currently being developed for iOS.

Overall Abertay’s Summer Videogames Show was an enjoyable way to spend a few hours and a brilliant platform for students to show their work. The only downside was the fact that the evening, like the Dare Academy event, was a one-off. If at all possible it would be great if these events could go on a little longer, so people a little less in-the-know could have a chance to attend and see the high quality of work coming out of Abertay’s game design courses.