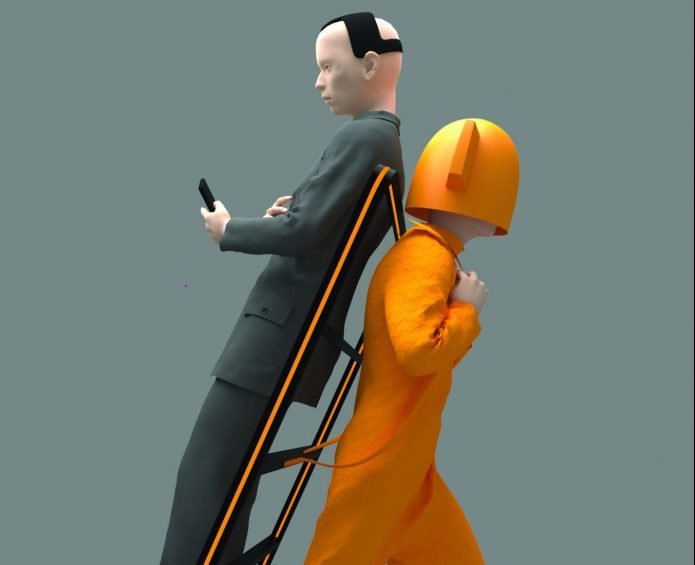 “3D software is very particular and not all of it is that accessible especially in a short session,” says John Butler, a Glasgow-based artist as he introduces himself for his Animation & Digital Design Workshop at Bonar Hall on the University of Dundee campus on October 20th.

John begins by apologising for not changing into a smart suit to demonstrate motion capture technology and for certain pieces of tech not being available to use during the workshop. “I knew it wouldn’t work but I brought it anyway,” he says, referring to a motion capture box flashing an ominous purple light.

“I’ve been using motion capture for about 20-years and it’s never really got any cheaper, the high-end stuff has remained high-end. So I’ve always used studios or repurposed. It was always a complete pain in the arse.”

But everything has changed for him with the Smartsuit Pro from Danish company Rokoko, and his enthusiasm is contagious. Claiming to be the only person in Scotland to own one, John explains that the suit relies on tiny gyroscopes within implanted in every joint of the suit – sort of like those within a smartphone – to capture motion rather than using numerous, expensive infrared cameras. These gyroscopes allow the suit to ‘know’ how it is orientated.

“It’s quite an exciting this. It’s basically motion capture coming down to the basement, to the bedroom level,” says John, before launching into a demonstration of his work. For NEoN this year he’s created a series of posters based on a film entitled People Should Work that he made using the Smartsuit’s motion capture technology.

The series of posters, Xerox’s Paradox, will be on display at Slessor Gardens from 6thNovember to the 31stDecember and will be available to view 24/7. The work explores ideas of how machines will change human labour and the jobs that human beings will perform in the future. This “futurological art” imagines that human labour will become so cheap and undervalued that the rich will ride in rickshaws pulled by several people, and bicycle couriers will roam the streets – sleeping in abandoned warehouses at night. Using 3D software and the Smartsuit, John has created a collection of clothing designed for this “age of symbolic labour” based on concepts of total productivity and utility.

Inspired by this futuristic clothing collection the rest of the afternoon workshop was taken up with customising cheap plastic Hazmat suits. John had come up with possible occupations of the future, including ‘Mood Stylist’, ‘Life Extender’, Fund Miner’, ‘Perceptician’, and ‘Machine Therapist’.

Although there wasn’t time to attempt any motion capture, the participants seemed to enjoy making their futuristic outfits. Overall it was fun and insightful, and hopefully the finished series of posters will be equally inspiring.

Xerox’s Paradox will run from 6thNovember to 31 December 2018 in Slessor Gardens, part of the Waterfront development in Dundee. Please be aware that it is an outdoor exhibition. Free.