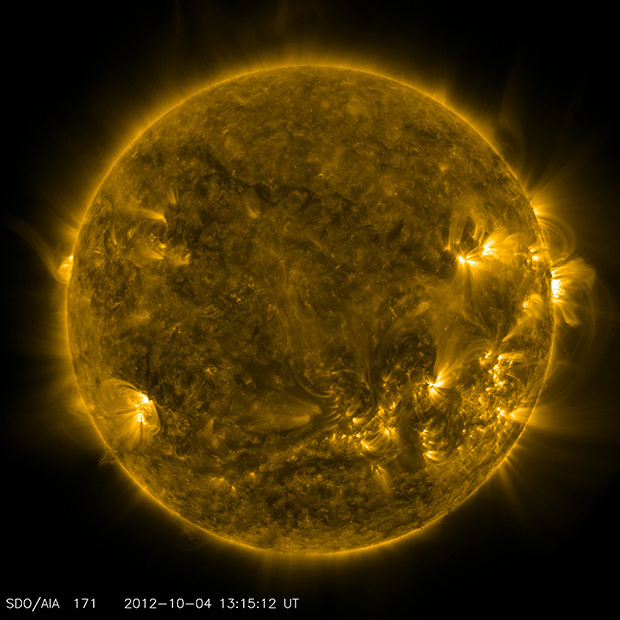 In the lead up to this year’s NEoN Digital Arts Festival, we are fortunate to bring you this interview from the team who have created 100,000 Lux.  The 100,00 Lux event has been created in the first ever collaboration between NeoN Digital Arts Festival and Dundee Science Festival.  100,00 Lux will transform the exterior of the University of Abertay’s Centre for Excellence building into a mesmerising display of LED lights and generative audio based on the science of the solar system.

The team are here to tell us about the scientific and creative aspects of the display and how they have worked together to create an event that explores movement between the physical and virtual worlds and encourages collaboration between the worlds of science and art.

[NEoN] NEoN and Dundee Science Festival are very pleased to be bringing 100,000 Lux to this year’s festival, can you give us some background information about the project and how you came to be involved with it?

[Antonia]I heard from Dundee Science Centre, Sensation that the NEoN festival was thinking about collaborating with Dundee Science Festival on a joint project.  This seemed to be an ideal opportunity for my research area, solar physics. We’re really lucky that there are a wealth of new and exciting solar observations at the moment from a number of space satellites and I wondered what kind of project the data might be able to inspire.  I got in touch with David a short time later to see if he might be interested too.

[Antonia]The Solar Dynamics Observatory (SDO) was launched into space in 2010 and is now orbiting the Sun in a geosynchronous orbit, about 22,000 miles above the Earth. On board SDO are three types of instruments observing the Sun and its atmosphere in a whole range of wavelengths and in unprecedented detail.  The observational data is beamed back to earth at a rate of around 1.5TB each day and is analysed by scientists across the globe.

The overall aim is to help understand how and why the Sun’s magnetic activity changes so dramatically in time.

[Antonia]For a start, the Sun’s atmosphere is made up of extremely hot plasma with temperatures of more than a million degrees. That turns out to be much hotter than the surface of the Sun and scientists are trying to work out why that is.

Lots of different dynamic phenomena take place in the solar atmosphere but all of them are controlled by its magnetic field, a field that varies significantly in both space and time.

There are some changes in magnetic activity that happen on long timescales such as a variation in its overall strength which increases and decreases over the approximately 11 year solar cycle. Other changes are much faster and more dramatic and give rise to solar flares and Coronal Mass Ejections (CMEs).  The CMEs can hurl a billion tonnes of hot solar plasma out into space.

The Earth has a magnetic field too but it doesn’t control the weather we get, instead it acts like a giant shield for the Earth, protecting life from things like CMEs.

The interaction of a CME with the Earth’s magnetic field is what causes the beautiful northern lights that can be seen over Dundee at times of high solar magnetic activity.

There are less desirable effects too – one example is that satellites such as those used for sat-nav can be damaged or destroyed by these solar storms.

[NEoN] Are these weather effects more dramatic in the suns atmosphere?  What is space weather like?

Space weather is a term that is used to describe changes in the conditions of the near-Earth space environment.

These changes can affect technological systems such as satellites, power grids and oil pipelines and even have an effect on the health of people in high-flying aircraft.

The Sun is the main driver of space weather through solar flares and CMEs, both of which are types of magnetic explosions which take place at unpredictable intervals.  There is also a more gentle background effect from the solar wind, a continual flow of solar plasma from the Sun that spirals out in all directions into interplanetary space and can interact in complex ways with the Earth’s environment.

Understanding, monitoring and trying to predict space weather is increasingly important as we become ever more reliant on space-based technology and missions such as SDO are a crucial part of this effort.

[NEoN] So the generative audio will provide a commentary explaining the solar display?  How was the audio designed and was it a lengthy process?

I have always been interested in the sonification of processes – in other words translating an idea into sound so we can hear what is happening as well as see.

This has the effect of creating a much more immersive experience for the observer and canlead to new ways of understanding the world around us. For100,000 Lux I decided to create a patch using the interactive software program MAX/MSP that tracks the amount of colour in a sequence. I then took the  data and applied it to various audio oscillators to create an evolving sound piece of varying frequencies and dynamics that change in tandem with the   colour changes and movement in Erin & Ian’s light sequence. An interesting aside to this is that certain colours relate to certain musical notes – for  example, the colour red when translated into audio closely represents the note of F sharp.

Alongside this I sourced some recordings of the Sun’s activity from NASA .

Huge magnetic loops coil away from the outer atmosphere of the sun and they vibrate like strings on a musical instrument.

These sounds have a strange beauty to them as they are produced by such a large and powerful source. Once again, I used the colour tracking data I had acquired earlier and used this to dynamically control the pitch and playback of these sounds, eventually combining them with the recordings made earlier to make the final piece. My hope is that the entire sound work paints a dynamic ‘audio portrait’ of the sun’s activity in conjunction with Erin & Ian’s work in taking Solar Observatory data and representing that in light and colour.

[NEoN] This should make for a very informative and artistic experience.  The aim of this years NEoN festival is to push boundaries between physical and virtual worlds.  Do you also think it is  important to blur the boundaries between science and the arts?

[Antonia] There’s certainly a creative element to much of science.  In physics for example value is placed on a simple or elegant theory to explain natural phenomena.  Of course the theory must agree with experiment or observation.  It’s also perhaps the case that the beauty of a physical theory does not have the same element of subjectivity as that in art.

In the other direction, as with this project, science can be used to inspire art or even be used as art in its own right – think of the images from the Hubble Space Telescope for example.  I guess that this is an area that will become more prominent as scientists seek new ways to convey results to wider audiences.

[David] I believe it is important for there to be an increased dialogue between artists and scientists. Each has important perspectives that can enhance life.  Traditionally in education, these subjects were presented together as part of a whole. Today, partly due to growth of different fields, there is a tendency for over-specialization, which can lead to the ignorance of other domains. Progression in the arts or sciences is now, often, an ‘either or’ choice.

It is unlikely that this system will change any time soon so projects like NEoN can make important contributions to increasing the dialogue. It is the hope that projects such as this will encourage and inspire a greater understanding between artists and scientists.