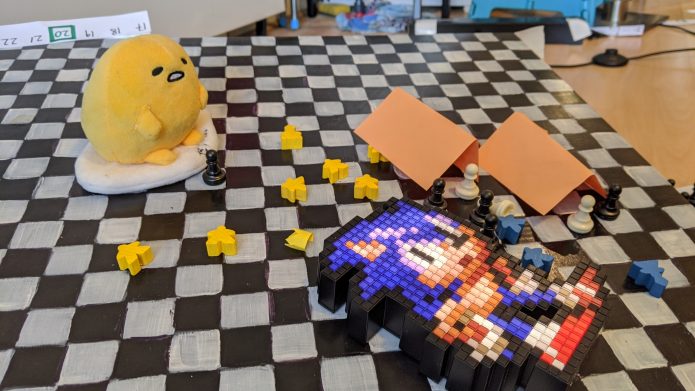 It’s not often that you can say that your game of chess included a postal voting system and a love affair, but Alistair Aitcheson’s interactive performance Pawns – held on the live streaming platform Twitch as part of Now Play This games festival on Sunday 5 April – was not a normal game of chess.

Twitch Plays Pawns was a live online event and a core part of this year’s Now Play This – a festival of experimental game design that is usually hosted at Somerset House in London. However, due to the on-going coronavirus pandemic the decision was made to move as much of the festival as possible online – creating a hugely enjoyable and free to access virtual festival in the process.

For one thing, the handmade board was two meters squared and Aitcheson routinely stood on it to carry out the increasingly bizarre demands of the participants in the Twitch chatroom.

“I’ve streamed  Pawns once before,” explains Aitcheson. “In the previous stream I was much more picky about maintaining the rules. If someone typed in an illegal move, I’d do the closest legal move I could think of, or I’d simply say, ‘I can’t do that.’ But for this game I made the decision, ‘Whatever people type in I will do, whether it’s a legal move or not.’ I wanted to see where it would go! And – I think this is obvious given the state of the board at the end – it went way beyond what I’d ever expected!”

It’s true that by the end of the game the board was in tatters.  “Originally this wasn’t going to be a performance. We were going to have the board set up, and visitors would be encouraged to take a move, contributing to a large on-going game that would span the weekend,” explains Aitcheson. “Obviously, visitors would cheat – maybe even stealing steal a pawn or two – and I was curious to see what people would end up doing with it. After all, the game is designed to be deliberately tedious. If you stick to the rules it’s a game that takes a lot of effort but has very little to offer in return. I wanted to see what that would do. If the game is deliberately tedious, how will players reclaim it and turn it into something fun?”

Twitch Plays Pawns definitely turned into something fun. At first the rules were more or less followed, with pawns moving forward, but a throwaway remark by Aitcheson about how best to identify the pieces to move resulted in the first named pawn – Jeremy.

After that it was inevitable that chaos would ensue, with instructions such as, ‘Zoe is replaced by the first object you can spy that’s of equal size,’ and, ‘Black Zebedee headbutts pawn in front and takes them down’. Quickly escalating to ‘Zoe and Zebedee kiss’.

Soon the pawns had revolted, overthrowing their own kings and replacing them with a union. Current events seeped in. ‘Fred goes into self isolation and has to stay two squares away from everyone’, typed one participant. ‘White workers call for an assembly and gather around AF15, ignoring isolation recommendations,’ suggested another. ‘AN2 coughs’ said a third.

After two hours of increasing pandemonium, the game was eventually won by the black team after Aitcheson went to get himself a glass of water, the white pieces decided to jump into the glass, and the black team declared victory.

With twenty minutes left of the stream an epilogue started, with suggestions such as, ‘White team find greater enlightenment, understanding that war brings only death and destruction’, and, ‘One single black pawn makes its way to the yellow society. They are bloodied and exhausted, and begins to tell the yellow deity of the horrors that are occurring as a result of the Black Team Civil War’.

In many ways the experience of playing Pawns on a platform such as Twitch was similar to old school text-based MUD (multi-user dungeon) games from the 1970s and 1980s.

“I think it’s nice that a stream like this can support both big and small levels of interaction,” said Aitcheson. “Every viewer gets to feel they had a hand in this collaborative soup. Whether they contributed big ideas or just a couple of moves, the performance would have played out differently without each of them.”

Overall, the game was viewed by thousands of people – with an active core of around 25 players, probably boosted by the amount of people currently at home in self-isolation.

Although it wasn’t intended to be a live, virtual performance, Aitcheson is pleased with how Twitch Plays Pawns turned out and how Now Play This managed to adapt to the current lockdown. He said; “I was so busy climbing all over the board I never stopped to look how many people were watching! The chat was certainly more active than I was expecting which is great because it means lots of people were excited to take part!”

“And it was a pleasure to be a part of the festival. This connection between art, games and play is such an important thing to explore. The effort they’ve put into creating a remote festival is so valuable because it brings this discussion to more people. Thanks to everyone who made it happen!”