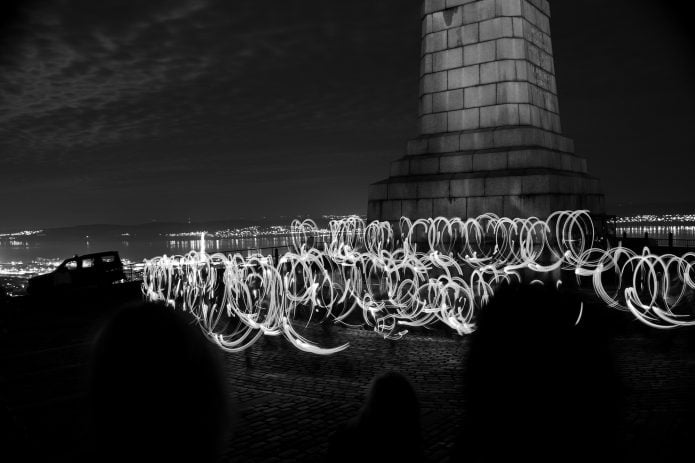 During the past few months NEoN has undergone something of a metamorphosis, we have made some big changes to ensure we can bring you the best digital arts festival in the country! Ok, well maybe we are the only digital arts festival in Scotland but the NEoN team are dedicated to putting Dundee on the map and working hard to ensure the festival line- up is nothing short of spectacular. We will announce our grand plans for the future soon but with the beginning of the festival only a few weeks away , a recap of the beautiful monster that is the North East of North Digital Arts Festival seems like a good idea – so here goes!

The brain child of a motley crew of creative Dundonians, NEoN first came to life through Interactive Tayside in 2009. The festival was designed to promote the area’s (the north east of north, Scotland) digital media activity. A partnership of private, public and academic sectors, the team worked together to deliver ‘NEoN09’, a national and international festival of digital media arts, with a focus on moving image, music and information technologies. The festival offered a host of activities and events including talks, performances, screenings and other special events in some fantastic venues across Tayside.

The 2009 festival was created to inspire studio developers, be they artists or programmers. From the latest production techniques to new business models, the programme of this new festival expanded the notion of art, information communication, media production, games communities and brought the individuals from these sectors together to collaborate.

During these early days of NEoN we held a consumer event, our first one, a public exhibition which saw 1600 visitors through the door in the first 4 hours! Visitors came to view 2D artwork, interactive student projects and new video and computer games. At this time we also held a two-day conference with keynote speakers such as Bud Luckey, animator and character designer for Toy Story and video game composer Tommy Tallarico. The programme was rounded off by an immersive video game concert featuring game music performed by orchestras combined with synchronised lighting and video and live action – not bad for our first venture.

Built on the brilliant success of our first festival, NEoN 2010 grew to be a 4-day international festival of media arts and included a two-day conference, master classes and workshops. We also hosted an international exhibition, performances, interactive installations and roadshow fringe events…and who can forget the party in the car park we held in the Greenmarket multi-storey – we celebrated the close of what had become a fantastic festival with some new friends from across the world. The 2010 festival explored the theme of character, this was most apparent in our character design competition. The festival gave a more focussed dimension to cross-sector collaboration and through the festival we were able to commission new artworks and highlight the creative process.

NEoN 2011, a whole year ago now, saw a fantastic array of events held in great locations across the city of Dundee. We teamed up with the fabulous Creative Dundee to hold a Pecha Kucha night, the festival also featured exhibitions in churches, sound installations, dance, performance, debates, exhibitions and so much more. The festival culminated at my favourite Dundee landmark, the Law. Overlooking the silvery Tay, more than 400 people trudged up the hill to the monument to see light projections and a light performance from local dancers – a memorable ending to our third festival.

So what does the future for NEoN hold? Time will tell, we have grand plans and can’t wait to tell you more and unveil our new programme…watch this space!