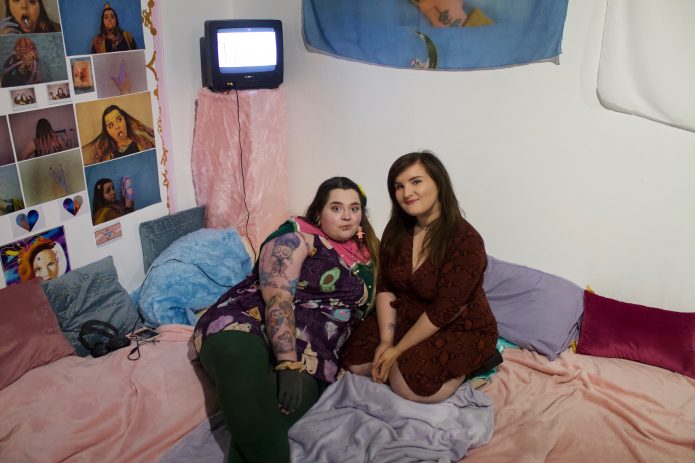 The Queer Dot: Our Space, Our Experience at Generator Projects this September is at its core a collective show – with pieces by different artists existing in harmony with each other in a dialogue about what it means to be a member of the LGBTQIA+ community in 2019.

Eleven artists were selected for the show, many of them members of the new queer arts collective The Queer Dot, which was formed earlier this year by recent DJCAD MFA Art & Humanities Graduate Steven Sheath as a response to a lack of queer representation amongst the art college library’s collection.

In April the collective had an engaging and well-received show at the Cooper Gallery, but with this show at Generator the members have excelled themselves – pulling together to create an exhibition that transcends the focus on sex and sexuality that many queer artists fall into, instead having the confidence to bring in topics such as fertility, body confidence, family relations and trans identity.

Leah Cameron’s comics Obviously Lesbian / Fruitless Flower are displayed in the middle of the space and use simple illustrations to tell personal stories full of authenticity and metaphor. They write: “Fruitless Flower is a comic about my issues with my gender identity and the constructs of gender altogether. [My] comics tend to focus on an autobiographic theme as a means of exploring [my] own identity, experience and ideas about what it means to be a young non-binary lesbian in the modern world and how difficult it can be to accept one’s own queer identity in a cis/hetero-normative society.”

Rhiannon Dawn Dewar’s work explores the concept of ‘girldom’ and how hyper-femininity relates to queerness through a post-pink video piece No Face and Decay about a fictional spirit in a pastel utopia. The film itself is lovely, with ethereal singing and the use of fresh fruit suggesting feminine deities of bountiful harvest. It features Rhiannon herself – drinking milk, posing, lying in repose – and is wonderfully opulent and sensual, magically decadent. This is mirrored in the installation she’s set up around it, with silken blankets and soft pillows for viewers to lounge upon.

Shawna Milligan’s installation is similar, using a kitsch, low-do aesthetic to create a playful and chaotic corner. There’s wigs and fake hair and tumbling out of vats of bright coloured liquid, bold paintings about loving beans and cheeseburgers, pink fur, dripping spray paint, and one of those foam noodles you use to learn to swim. It’s brash and highly enjoyable.

Steven’s work occupies the centre of the main gallery, with a wooden structure containing a pink triangle – a symbol used to identify gay men during the Holocaust. Inside the structure are two old cube TVs and a projector, showing video collages about toxic masculinity and memory – recalling a conversation with his grandfather about how it’s okay to be gay, prompted by seeing Julian Clary on the television. .

Another piece about family is Lucie Rachel’s project Mother Father. A short film is accompanied by a book – pages open on a pedestal like a religious text – with both telling the story of her trans parent’s journey to coming out and how it affected the family. What’s particularly poignant is the lighter grey text in the book detailing the other parent’s side of the story. Providing both perspectives is a clever touch. For instance the line; “He always said he loved me and that it was only a small part of him, so each time I put on the lid and screwed it down like Pandora’s box.” A collection of first hand accounts, diary entries and archive photographs are within the book, while the film focuses on tight domestic shots with a moving audio voiceover.

Morgan Black also explores the trans experience through black and white photographs showing her current dual identity. The strongest piece is one of her with her fist raised in defiance and solidarity. Meanwhile Kris Thomassen uses imagery of plants and small animals in their piece Body of Weeds – a series of prints alongside a gentle and charming short animation – to explain the mixed emotions that are felt prior to commencing transition.

Alongside the show there’s a gender expansive and plus size friendly clothes swap on Thursday 19 September from 6-10pm, At the same time there’ll be an opportunity to join in with a collective painting being made for Dundee Pride (which is on Saturday 21 September). Both events are free and people of all backgrounds and abilities are welcome.

The Queer Dot: Our Space, Our Experience runs until Sunday 22 September at Generator Projects 25-26 Mid Wynd Industrial Estate, DD1 4JG Dundee, which is open from Thursday to Sunday each week from 12 – 5pm.