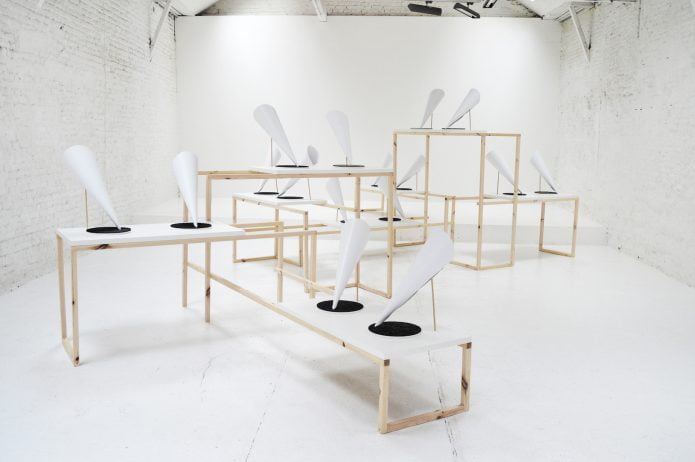 NEoN caught up visual sound art collective VOID, who will be taking part in the festival this November. Comprised of Mauro Vitturini and Arnaud Eeckhout, the collective are known for their installations, which explore the different ways silence and sound can be visualised.

You seem to be interested in subtle sounds, like a drop of water falling onto an umbrella in your piece ‘One Drop’. Where does this interest come from?

Sound is omnipresent, so much that we learn to take it for granted. We can stop seeing by closing our eyes, but we cannot stop hearing by closing our ears. Even then, we will keep hearing the sound of our blood, our heart, our stomach, etc… Most of the sounds can be subtle; the only thing we need to do is to focus. And that’s what we do.

Sound has a significant impact on our sensorial field. It interacts and interferes with the perception we have of the reality around us. Using sound as a material, we produce artwork that represent the world around us from a very different point of view. Sound becomes to us what a brush or a colour is for a painter. 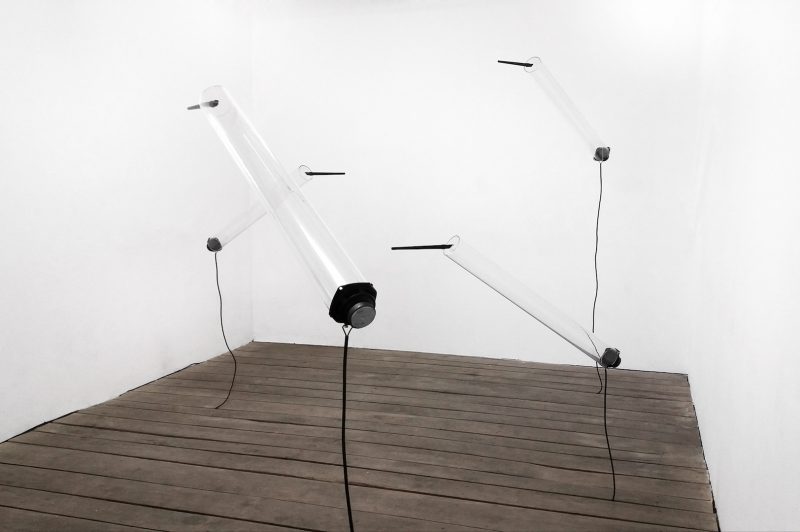 Some of your pieces, for instance ‘In Between’, ‘Air’, and ‘Silence, Un Mot’, attempt to visualise and communicate the idea of silence. Could you explain how these pieces work and what the importance of silence is to you?


We believe that the utopia of silence is one of the most thrilling and exciting fields to get our ideas from. The emptiness, intangible surface, shapeless and intention-less, is to be considered as a space to express reality in wilder and more spontaneous conditions. The works you quoted are just three examples of the infinite possibilities.


In ‘In Between’ we focused on the pauses and silences “in between” each word of a recorded dialogue. We kept all these “non-sounds” and deleted all the rest, namely the words composing the dialogue. In this way we have a new dialogue between two different kind of silence.

Most of the sound we hear travels through the air, moving it till these invisible waves gets to our ear (like water waves get to the beach). In ‘Air’, these waves are closed and focused inside a transparent tube. The source, a speaker, spreads in the tube some infra-sounds (frequencies that our ear is not able to hear, so… ‘silence’), which move the air inside the tube. At the other edge of the tube there’s a flute, which turns these silent waves into audible sounds, putting the accent on the metamorphosis moment of ‘silence’ into sound.

‘Silence, Un Mot’ is a drawing/engraving of the word ‘silence’ sound wave. Once recorded with a microphone, the sound of the word ‘silence’ is translated into a graphic sound wave, and then drawn with a cutter into the paper. This action of adding/removing allows the drawing to be visible and invisible at the same time, like silence can be, represented by a word that is at the same time representing and denying the concept itself of silence. 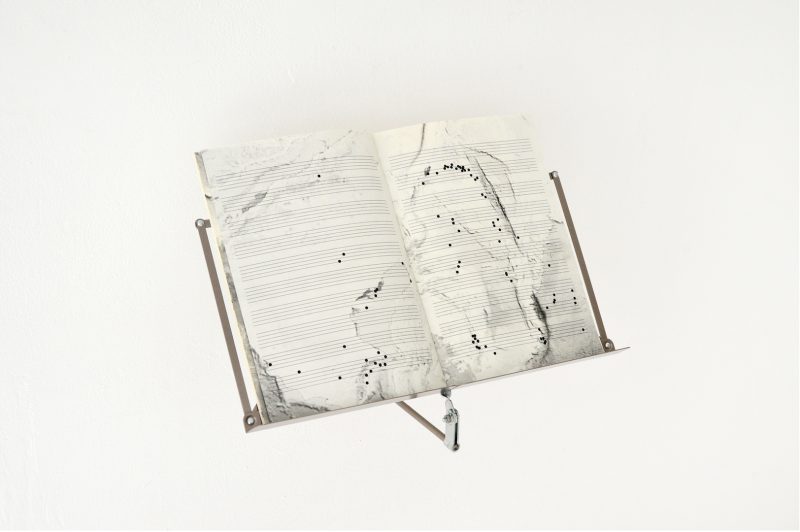 There’s a tension between nonsense and sense in your work, such as in ‘Noise Is Full of Words’ where a computer tries to translate music into text. Is understanding, on some level, a matter of perspective?

Of course it is. Most of our languages are caused by glitches: dialects are often the result of a mix of theory and practice, of knowledge and mistakes. As human beings, we constantly develop new languages, new ways of expression. And this is going even faster thanks to the rapid advancing of technology. Only a couple of weeks ago two robots, speaking to each other, invented a new language that only they could understand. This episode could be seen as indeed the birth of a new language, or simply as a big misunderstanding created by a glitch. It is a matter of perspective, isn’t it? And since we are so interested in sound, let’s not forget that an unknown or incomprehensible spoken language become straight away mere noise. Words are noise. Words are full of noise.

With ‘Noise Is Full Of Words’, despite the nonsense and the glitch, we still decided to print a book with the results we had. We made a choice of ‘perspective’ in order to give other people the chance of making their own choice about it. To share it with even more people, we are now translating the book in 100 different languages. Of course using Google Translate: let’s feed the glitch!

What exactly is ‘sound archaeology’? Do you see yourselves as preserving sounds that might otherwise be lost, and why is this something you feel drawn to do?

Sound archaeology is an idea that came up to us after the discovery of Archaeoacoustics (the use of acoustical study as a methodological approach within archaeology) and after the brilliant utopic idea of Guglielmo Marconi that ‘sound never dies’. We thought we could try to listen to all the sounds engraved in the surface of different places since they have been there.

But we were and we are not driven by the idea of conserving. Most of our artworks avoid this problem by often using ephemeral materials, which require being rebought and remade every time the artwork is exhibited. There is something appealing to us in preserving these sounds for ‘Bruit Blanc’; but it might be just a fetishist love for vinyl-like objects.

What are your artistic influences?

It’s never easy to make a list of influences. There are so many things and people who influenced us since we were children, starting with our fathers. So… listing just a couple, of course John Cage for his research about silence as much as the process he developed about the composition of ‘organic music’, which has an intrinsic relation with chance. We have a piece inspired by that, ‘Silences’, where we asked Google Maps to locate the word silence on the world map. In turn we got plenty of dots indicating places, shops, streets, studios… and we turned them into music sheet by adding scores on top of them. Today ‘Silences’ is interpreted and played with carte blanche by musicians and orchestras.

We could also think about Marshall McLuhan and his motto ‘the medium is the message’, that always seemed to us both the starting point and the conclusion of every creative process in visual art. But there are so many people; YVes Klein, Bruce Nauman, Richard Feynman, Olafur Eliasson, Philip Glass, Zimoun, Stephen Hawking, Pietro Fortuna…

What are your plans for NEoN and is there anything in particular you’re looking forward to doing or seeing while you’re in Dundee?

For the NEoN Festival we will present the site-specific installation ‘Bruit Blanc’, an attempt to read all the sounds that every surface has absorbed during its history, starting from the idea that sound leaves traces of its interaction with every material by a natural phenomenon of sound erosion. All these sounds draw a picture of the place’s acoustic history: a sound archaeology of the space. 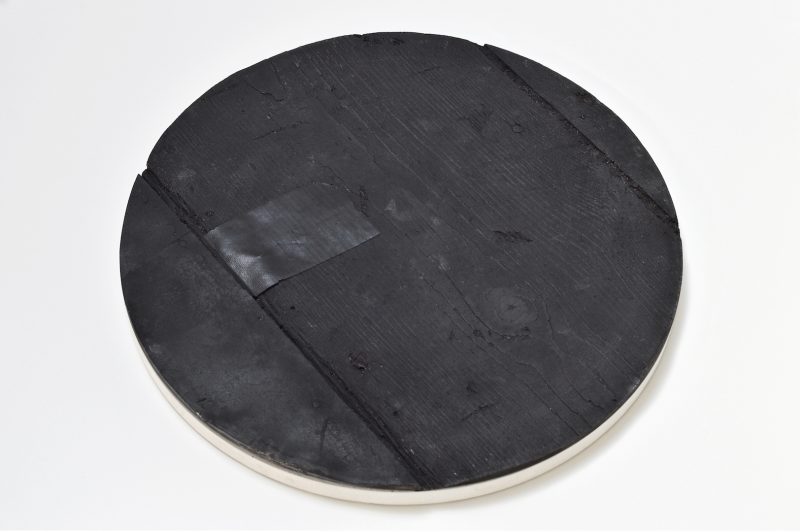 It would be great to be able to mould the walls of Balmerino Abbey, the soil of the Dundee Law, the Tay Rail Bridge… but even if we now have a technique that allow us to get the mould in five minutes (which means doing it without asking any permission), unfortunately it is still not easy to always get what we want. But for sure we will find plenty of other places by walking around the city.