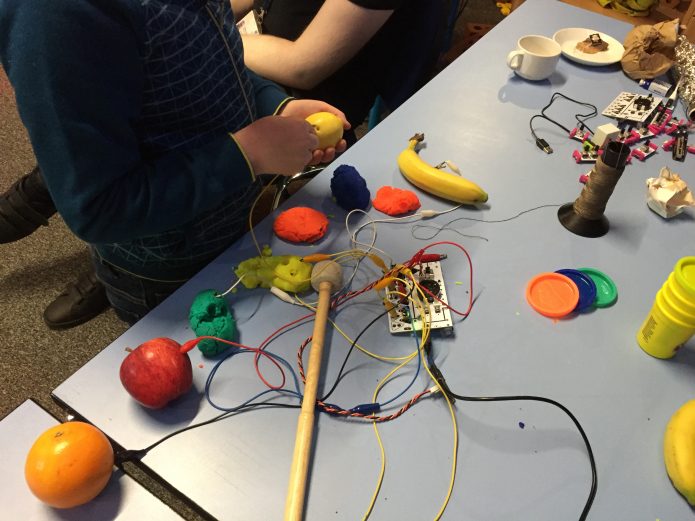 Half-way through building a keyboard out of tinfoil and insulating tape I realised why the Sensatronic Lab has been so successful; it’s just great fun.

I was taking part in a ‘Build Your Own Digital Instrument’ workshop at Dundee Contemporary Arts (DCA) run by Ewan Sinclair and Bal Cooke, part of SENSE Scotland backed project Sensatronic Lab. I’d also been along to their digital drop-in the day before, which was an all-ages event and seemed to be full of enthusiastic children bashing foam structures and laughing.

One of the main foam structures was called the Dome-coder and is one of the many digital instruments that Sensatronic Lab have designed. Working closely with young people with physical and developmental disabilities, they’ve attempted to find ways for their service users to express themselves through digital technology. They explained that the Dome-coder was particularly good for those with motor-neuron diseases like cerebral palsy, as it can be easily grasped, while also being a way to project the human voice – allowing one girl they worked with to ‘sing’ despite not being able to speak in the conventional sense.

“It’s about making accessible digital instruments,” explained Ewan. “It has kind of come about through working with young people.”

Initially funded by the Time To Shine youth initiative, the project is now funded through Creative Scotland’s Youth Music Initiative so still caters for an age-group between around 0 – 25. One piece is a table with a screen imbedded into it, which can be beaten with soft sticks like a drum to create a light display on the screen. “It’s got a microphone and it’s picking up the vibrations,” says Ewan. “It goes through an iPad that processes and converts it into sound, and then it goes through a video synthesiser. It has a visual output and someone using it can have control of it quite easily. So anyone can come up and interact with it.”

Although they were only at the DCA for the weekend, Sensatronic Lab run regular workshops with a core group of young people once a month and are hoping to return sometime in the spring for another open day. Definitely something to keep an eye out for if you’re looking for a fun digital day out for all the family.