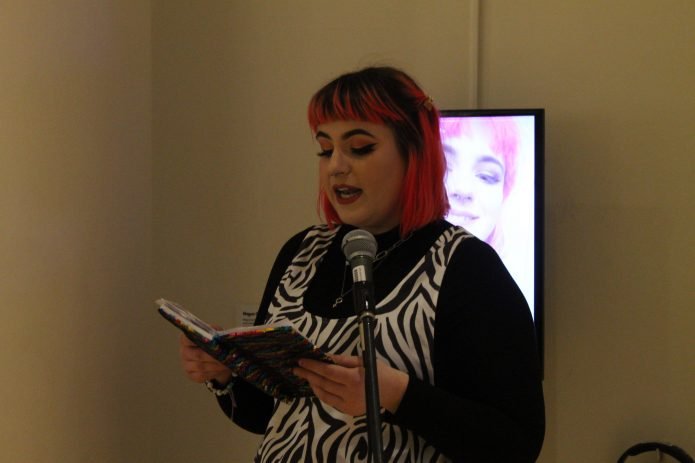 Not many people would be brave enough to ask their ex-lovers for constructive feedback, but then Megan Goldie isn’t afraid to be herself.

The graduate of Duncan of Jordanstone College of Art & Design is currently taking part in the RSA New Contemporaries exhibition 2019, where she won the RSA Chalmers Bursary.

Her work is a combination of video, text, and live performance, and she delights her audience with tales of a clandestine one-night-stand while on a family holiday in Tenerife – or as she would put it “shagging someone while off my heid”.

Its this sort of honesty that makes Goldie’s work so endearing, especially when you take a step back and appreciate the lengths she’s gone to capture this moment in her life where she’s young, free, and confident in her sexual choices. Tracking down and interviewing exes, even over social media, is no small feat.

And the feedback from ex-lovers ranges from the purely sexual – “you made me squirt” – to the strangely poignant, with one respondent answering the question “Have you ever been in love with me?” with, “For about 48 hours after we were together. I blame the amphetamines.”

All the interviews display a surprising willingness to reflect from the responders. There’s obviously a lot of humour in there too.

“I love them all though, some of them are quite touching to me, and there’s lots of fond memories in there too.”

As well as the interviews Goldie has compiled her Instagram stories into a 45-min video, which plays on a loop. These feature snippets of her everyday life; with rambling stories and drunken nights out. It just makes being in your twenties look like a lot of fun.

In terms of video work Goldie is keen to stress the potential of the iPhone format, she says, “I’m always recording things and it’s just easy to whip my phone out and record something. My work isn’t really concerned with aesthetics, more so the content, so iPhone quality works just fine.”

At 22, Goldie is definitely a digital native and sees her work as crossing the boundary between the offline and online worlds. She says, “All my works exist digitally in some form at some time, so like social media stories, text messages, voice notes or iphone notes.

“I love the strangeness of bringing things that exist digitally or online into a gallery space.”

Catch her perform at the exhibition closing party on April 3 at 12pm and 4pm in the lower gallery of the Royal Scottish Academy building, on Princes Street in Edinburgh. Or follow her on Instagram @armagegan for pop-up performance dates.