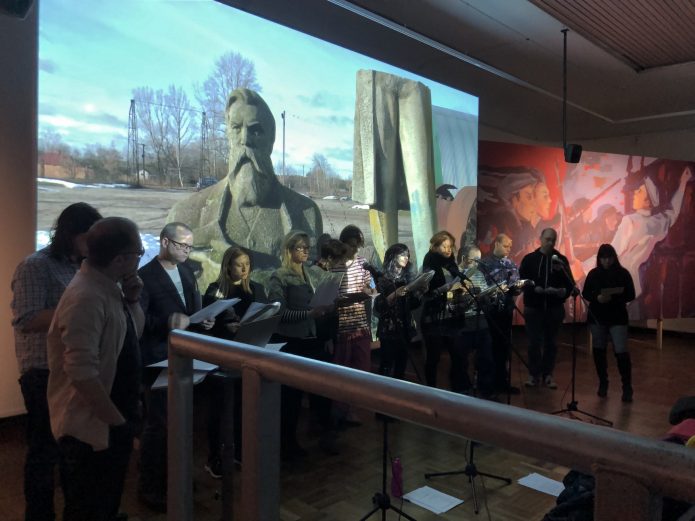 Dundee tales were a highlight of Suffer The Workers playwriting scratch night at Cooper Gallery on Thursday 24 January.

To tie into the Phil Collins exhibition and film, Ceremony, playwrights submitted short scripts, which were performed as stage readings without full costumes or set pieces. Even so, the plays still had gravitas – benefiting from a strong cast who lent the pieces the depth of feeling needed.

All the pieces performed were political in some way, chosen as a response to Ceremony – which follows a team of activist/artists as they transport a sculpture of Friedrich Engelsfrom the Ukraine to the UK. The night was organised by Dundee-based playwriting group Scrieve, which has been running since last summer.

Founder John McCann explained: “It was a great night: a great opportunity for Scrieve to link with a cultural institution such as the Cooper Gallery. Collaborations like this are something I’m really passionate about.

“I was happy to expose the writers, readers and audience members to a broad range of work in various styles. It’s always a pleasure to share new work by local playwrights who responded brilliantly to the themes of Ceremony… the film is theatrical, communal, ceremonial, a celebration… I always look forward to seeing what they come up with next.”

A highlight of the evening was Donald Falconer’s piece ‘Cauld Beans’, about a woman visiting a foodbank after her benefits have been stopped. With echoes of the Ken Loach film ‘I, Daniel Blake’ the piece emphasised both the importance and the shame of foodbanks and did so with empathy and a respect for human dignity.

James Barrowman’s piece ‘Bring me the head of Desperate Dan’ generated a few laughs as its characters criticised the Oor Willie public sculptures and argued about the meaning behind the city centre’s statue of Desperate Dan. It was elevated by a darker undertone about cultural forgetfulness and public outrage.

Outside of Dundee, Elaine Newton performed a particularly moving section of leading Ukrainian playwright Natal’ya Vorozhbit’s ‘Bad Roads’ – a series of progressively intimate statements and questions such as, “I never knew I could… write in a time of war… drink champagne in a time of war… could I take in refugees into my home? Could I die for my country?”

Hard questions were also asked in ‘The Jungle’ by Joe Murphy & Joe Robertson, set in the refugee and migrant encampment near Calais in France.

Overall the night was a great introduction to political theatre, as well as the playwriting and acting abilities of the members of Scrieve.

Catch the next scratch night on Thursday 14 February from 6:30 – 8pm at the Cooper Gallery.