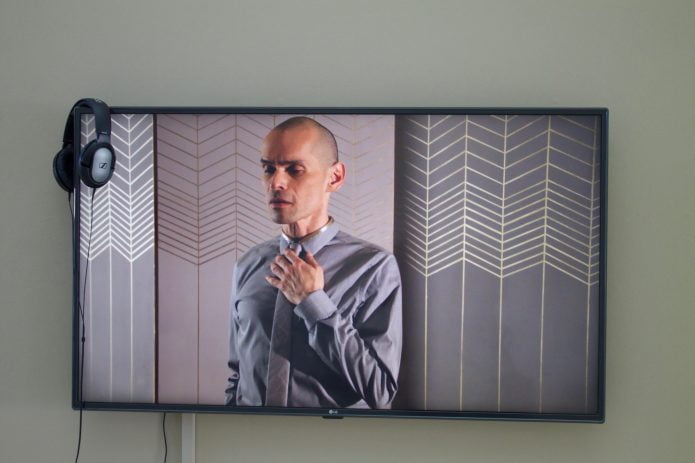 Images of fish eggs, bacteria, drawings of fishermen, and unidentifiable masses of matter and microbes – Ker Wallwork’s video art piece ‘Small Wet Mouth’ is a Muriel Spark-esque tale of gender-bending and the release.

The film is part of the ‘Disentangle: Science in a Gendered World’ exhibition at LifeSpace gallery in Dundee. It follows a woman, Nadia, who is disillusioned at work and decides to literally swim with the fishes, as well Doug – a fisherman who secretly wears his partner’s nightie under his clothes.

Both stories are told in voiceover audio and contain odd lines such as, “She spent a lot of time thinking about mould”. At 12 minutes long the piece is short enough that you’re left wondering what happens to the strange characters Wallwork conjures up.

The rest of the exhibition is equally strange and intriguing; with a highlight being a picture of a woman being guarded by a pig-man (a common motif in artist Kira O’Reilly’s work, though this piece has been made in collaboration with Jennifer Willet).

There’s also a video piece as part of an installation from Benny Nemerofsky Ramsay, filmed in such high definition you can see the sweat on the actor’s brow.  The film ‘The Last Song’ features a man singing, but the voice that you hear is that of a baritone and a soprano – creating a disconcerting comment on masculinity, gender and queer aesthetics.

Overall there’s a lot to unpack at ‘Disentangle: Science in a Gendered World’. If you have a chance do go down and check it out, it’s on till April 6, 2019.

LifeSpace gallery is part of the University of Dundee and is situated in the School of Life Sciences at the top of Old Hawkhill Road. It is open on Saturdays 11am – 5pm and during the week by appointment. Email lifespace@dundee.ac.ukto make an appointment.