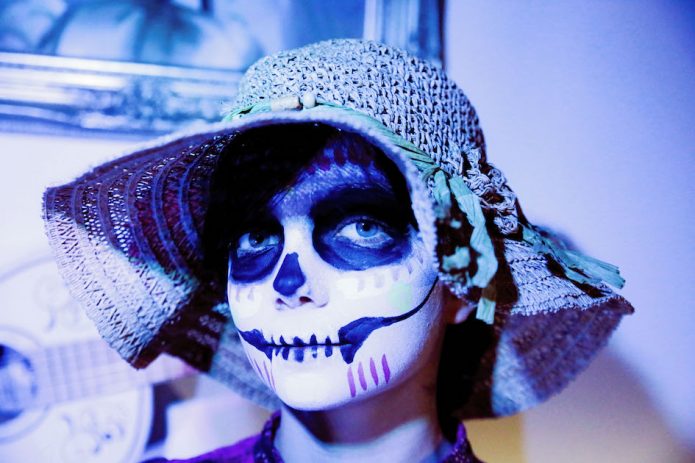 The cinema screen was festooned in a garland of bright orange petals, a fixture of Mexico’s traditional Día de Muertos, or Day of the Dead festivities that star in Pixar’s latest feature film Coco. The screening, which was held in Centrespace Gallery in the Visual Research Centre on Friday 9 November, was a dress-in-theme event. A floor full of children crowded together under the screen, flashing brightly festive Mexicana gear and skeletal themed black face paint adornments – such as skull and cross-bone circles around eyes.

It was a colourful start to a visual exuberance of a film. What might at first seem to threaten sombrero cliché after amigo joke, Coco instead took us all on a child friendly, toe-tapping journey through deeply felt questions like life and death, culture, love and family. Pixar lets this fluorescent annual ritual tell the touching story of 12-year-old Miguel, a young Mexican boy who dreams of being a musician like his long dead idol, Ernesto de la Cruz, a popular crooner who rose to become a screen star and national recording legend.  Before he can even hope to follow in his idol’s footsteps however Miguel has to somehow convince his family that their generations old feud against music can finally be laid to rest. Chasing that dream lands him in the kaleidoscopic Land of the Dead itself where he meets Hector, a vagabond but charming friend with a big smile and a shared love of music, not to mention a disarmingly modular skeleton that keep falling to pieces and clicking together again, like clattering rhythm sticks.

Miguel’s extended family of shoe-makers live in a small town in Mexico, where each year on the Day of the Dead they cover an altar with portraits of dead family relatives, offerings of food and orange flower petals to honour their memory. We soon learn that this memorial is a vital key to welcome back departed loved ones on that one day of the year when they can return to revisit all those who remember them. Coco is Miguel’s great-grandmother, whose fast-fading memories include the long-lost, wandering father who went off to pursue a career in music and never came back, leaving his young wife and child to fend for themselves. This historic abandonment sparked the intense family fury against all things lyrical – Coco’s father’s face has been torn from the family photo portrait and his name is mud.

A twist of fate lands Miguel in the city of dead, chasing this long-lost father’s blessing as his only way back to a life where he can finally pursue his dreams of playing music. Chased by family passions on both sides of life it’s a race against time and not only for Miguel. Once the departed are forgotten, even their bones fade away and they disappear from the land of the dead forever. In the end it’s a song, ‘Remember Me’, that saves the day.  Tempering what is otherwise a quirky family tale about life, love, the chance to make amends and zippy skeletal dance moves after death, Coco’s fading memory becomes a tearful path of loss. I cried – and I wasn’t the only one. This is a zany film (with notably no princesses locked away in towers, or elsewhere for that matter…just earthy, fiery, crooning, wounded, loving and wrinkled women) that may just help children cope with grief.