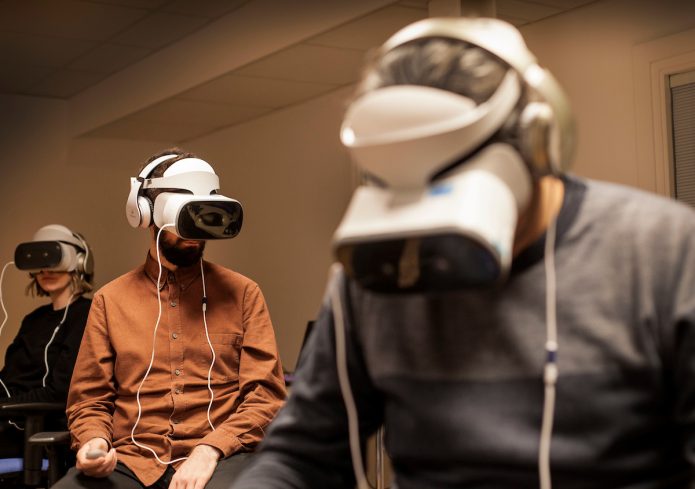 I toss the teddy bear from side to side with my blocky virtual reality hands as I sit on a bed I know is not there, listening to a story about two sisters. I’m taking part in VR Theatre: Sisterhood at Dundee Rep, and through the Oculus Rift headset I’m interacting with ‘Is Anna OK?’ directed by Camila Ruz. I drop the teddy bear and the programme shudders with a moment’s confusion before the bear reappears beside me and I can start that section of the story again. But I take a second and stare at my hands. VR is so cool.

This event is organised by Limina Immersive as part of the National Theatre of Scotland’s Citizen of Nowhere project. Split into three stories, VR Theatre: Sisterhood also includes ‘We Sing In Fire And Blood’, a haunting opera which has just been awarded Arts Council England funding, and an interactive sound-based piece called ‘Make Noise’ from Bristol-based creative collective Anagram made using real audio recordings of suffragettes from the BBC archives.

Speaking at the Art and Technology Collider panel discussion at the Vision Building in Dundee on Saturday 11 November, Limina Immersive coordinator Emma Hughes says: “I never thought VR was for me at all… but what’s so amazing about VR is that it’s so new we don’t have to bring the baggage of past mediums – we can start afresh.” And bringing the freshest theatrical work is what Citizen of Nowhere is all about.

Another speaker taking part in the panel was Annie Dawson, director of Hello, Hi There – an “algorithmic theatre” piece being shown as part of the project, which recreated Noam Chomsky and Michel Foucault’s famous debate on human nature – reimagined as a conversation between two chat bots. “It’s a very simple programme, like you found in the 1970s,” Annie explained: “The notion was, can I make theatre that’s following a set of processes without involving actors or even a director?” By all accounts she has been successful, even though sometimes the bots got stuck in loops.

Rhoda Ellis, a local artist working with VR and part of the Vision-building based Biome Collective, said of Hello, Hi There: “It works as a play because it feels like you have a transformative experience, which is what I want to get from the theatre.

“I think what Citizen of Nowhere is trying to do is very admirable, addressing the interplay between the post-human condition and technology and connecting with audiences that won’t necessarily go to the theatre.”

Citizen of Nowhere took place between 7-11 November at various locations across Dundee, Scotland.