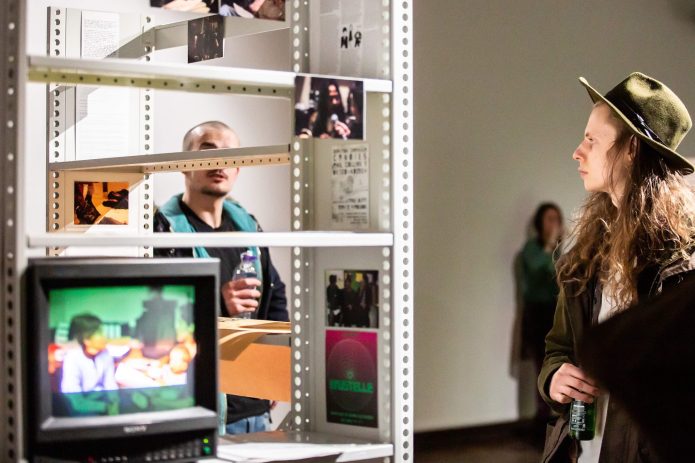 While the whole of the Anne-Marie Copestake exhibition at Cooper Gallery in Dundee is well worth seeing, the highlights are; a video archive of interviews orchestrated by Copestake, and a short text-based film about a woman who tries to disappear.

The film, ‘Untitled’ from 2000, is about an unnamed woman who is intent on erasing every trace of herself from her fingerprints around her home to her name on public records. Told in the first person in short, practical sentences, the piece is silent with text projected onto an ‘aged’ wall built in the gallery especially for this exhibition.

The story follows her as she disconnects her telephone, shreds her passport, and burns her clothes with lines such as; “I stole my public records and made a fire with them,” “I smashed the security camera,” “I left no forwarding addresses.” The piece is unsettling and emphasises the futility of trying to disappear. Wherever we go we leave a trace, from fingerprints to strands of hair, and the statements themselves read as if they were a confession – implying the protagonist may not want to disappear completely. It’s masterfully done, subtle, and demands repeated viewing. If only there’d been some seats.

The video archive is displayed on three screens, though only two have headphones, and comes with a handy list of interviewers and interviewees. It has previously existed as a website and hopefully will exist as one again, as it would have been good to have been able to choose which conversations to watch. Those featured are members of the artistic and music communities of the 90s and 00s who passed through Glasgow and in front of Copestake’s camera.

She writes: “The ideas behind the project were egalitarian; there was no higher or lower status between two (or more) artists sitting talking. It was naïve of me not to realise that as a matter of course it almost automatically became one person focusing on the other… there was absolutely no expectation that anyone should ‘prepare’ for the situation. It was an encounter. Some wanted to prepare and some did not.”

Each visitor will recognise a different set of names, but some that stood out were; Katy Dove (who had a posthumous retrospective at Dundee Contemporary Arts not long ago), poet and all-round creative Billy Childish of the Stuckism painter’s movement, and riot grrl pioneers Le Tigre and Chicks on Speed. Filmed in pubs, people’s homes, and even one memorable one in a public toilet, the interviews are a mixed bag – but are a must see for anyone interested in the Scottish cultural scene. Copestake deserves a lot of praise for collecting and maintaining such a resource.

Alongside the video archive is a physical one of CDs, posters, postcards, and other printed media collected by Copestake. What’s clear is that this is someone who cared deeply about what was going on around her – to her credit – and someone whose own work deserves the same kind of care and attention. Take a couple hours and really engage with this exhibition, you won’t be disappointed.

And if you’re free on Saturday 13 April head down to experience a screening and discussion with Copestake in collaboration with LUX Scotland. It’s free but ticketed from 2-4.30pm that day. Other the Cooper Gallery is open from 10am – 5pm, Monday to Friday and 11am – 5pm on Saturdays.