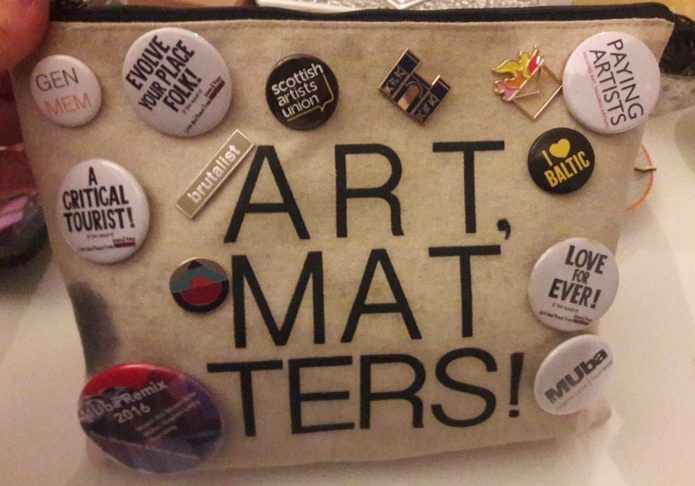 Did you know an artist wrote the code for what became Twitter so that protesters at a 2004 Democratic National Convention in Boston could communicate easily with each other? TXTMob by The Institute for Applied Autonomy (Tad Hirsch, Rich Pell and others)

An artist created a mobile photo camera rig and ran around town with it long before Google invented Street View. See Banff! by Michael Naimark

An artist created an online photo sharing website at least a decade before Instagram arrived on our phones. Phlog.net

An artist rewrote a browser plug-in to not just block ads from appearing as you browse the web but to replace them with images of works of art. Add-art by Steve Lambert

Two designers democratised the laser cutter by making it open source, so the maker and inventor and every day consumer could try making things. Lasersaur by Addie Wagenknecht and Stefan Hechenberger.

Various artists worked out how to hack Gameboys to make music and shared those instructions online.  Nanoloop by Oliver Wittchow in 1998, shortly followed by Dominic Smith aka spoonbender

Artists created the first distributed denial of service attack software as part of the Zapatista uprising in Mexico in 1999. Floodnet by Electronic Disturbance Theatre (including Carmin Karasic, Brett Staulbaum, Ricardo Dominguez and others)

An artist built a platform to allow Americans to sell their votes to the highest bidder in an online auction to influence election results. Vote Auction by UBERMORGEN.

An artist is currently working on a project to collect stories from people who think their mobile devices are listening to them. Tega Brain’s new commission, The New Organs, with Mozilla.

In the past few years digital technology and new platforms, many realised by artists in the first place, have encouraged greater social and political engagement, enhancing and expanding opportunities for citizens to directly participate in civil society activism. Artists are often driven by a need for new ways to connect, and to share views on the world with one another. Now more than ever, we need to learn from the ways artists use digital technology to better understand how to engage with and react against the world around us.

What role can digital art play in giving form to our political systems, and what political strategies can be meaningful for digital art? How can digital arts activism be an appropriate political tactic in contemporary European society, and an approach to engage people in socio-political issues?