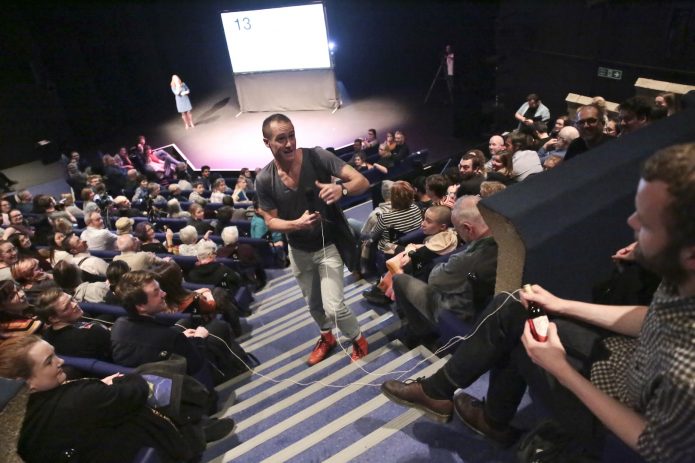 Kung fu, Brazil, alcohol festooned string trails, dinosaurs, fractals and roller derby: it was one of those nights where you could find yourself talking about anything. Dundee Rep was packed solid for Creative Dundee’s NEoN themed Pecha Kucha event, a performative ‘Hey, this is what I’m into’ style get together. Pecha Kucha is a presentation style whereby participants talk through 20 slides at a rate of 20 seconds per slide. Started in Tokyo in 2003 as a way of keeping architects in time, Pecha Kucha has grown popular worldwide. This year’s NEoN featured a Pecha Kucha event, which was volume 22 of Creative Dundee’s take on this tight, but open discussion style. The evening brought together a mix of local and international speakers, made accessible to many through a combination of free transport sponsorship for disabled attendees and sign language translation on stage throughout.   As event MC, Gillian Easson kicked off the evening with a video of previous Pecha Kucha youth participant Chloe, gleefully sharing her previous achievement – getting through the speech!

Fourteen speakers shared just how personal passion can be:

Sekai Machache, an artist in residence at DJCAD educated us in the politics of Afro-themed hair styling and shared slides of the 10 metre (plus) hair-braiding piece that she produced for her graduate show.

William Galinsky, creative director of The Citizen of Nowhere collider project spoke about the impact of reaching out to people who don’t agree with you, including why his best new friend is a Kung Fu instructor with politics he can barely understand, let alone agree with. The collider project took place during NEoN and brought together a wide range of different theatre practitioners, digital artists, scientists and technologists to work together and engage collaboratively with emerging issues in AI and data politics.

Kirsty Thomson, CEO of the Circle Dundee shared how her life was shaped by the love she felt for her severely disabled sibling – leading to a career researching how to help people who struggle to communicate – and why as a result she has devoted herself to social enterprise work. “You can’t just talk about not-for-profit”, she said, “It’s about generating profit to do good.”

Vagner Mendonica, a Whitehead artist and professor at the Texas Women’s University exhibiting during NEoN, shared how his visual art practice explores how people put him in a box, and how he then interfaces with that sort of cultural cannibalism, asking; “Once you’ve removed social constructs of yourself, what is left?” His work explores coding, like the break tag in HTML that he embedded in layered images of male silhouettes to show where he broke his back when he was young.

David Martin, CEO of Dundee City Council championed dinosaurs of every kind, even older people who he argued aren’t valued as much in our culture, as they should be. Dinosaurs are everywhere, he reminds us, and they have a lot to contribute to their city. Dinosaurs are cool.

Jen Southern, director of the Mobilities Lab at Lancaster University gave the audience a brief tour of the PARA-site seeing, a travel blog she developed in collaboration with Rod Dylan that was commissioned by the Wellcome Centre. It broadcasts the voracious travels of Leishmania parasites which jump between humans, dogs, insects and onwards through all sorts of social fabrics. Highlights include @LdBOB72 on Twitter which documents the search for our ancestors and Elektra_Domininca’s slow travel blog on Instagram, a 150 million year tale of being stuck inside a sand fly in a block of amber.

Dr. Anthony Schrag, an artist and researcher interested in the place of art in social contexts beyond the gallery bravely left a series of empty slides on stage as he strode through the audience weaving a complex, haphazard web of string and free alcoholic tempters through the audience, by tying one person to another and asking questions like: “Tell me something contentious about yourself?” Dreaming of going to Borneo seemed to be a common theme.

Amy Parent who studies space weather and clouds in distant stars by day, told us why roller derby has become her number one after hours passion. For Amy, transitioning as a transgender woman has been a hard and lonely experience. There’s no nice map that tells you how to present as a woman, she says, so its a constant game between what you want you do and what people expect. In discovering Dundee Roller Derby, Amy has found a safe place where anyone, no matter what body, shape or gender, can feel welcome.

Dawn Hartley, head of creative learning at Scottish Dance Theatre shared her passion for maps, introducing us to a few personal favourites like acupuncture marks, or the unrealistically ordered, but soothing London Underground, as well as notation for a working ballet, and the sorts of notation used to map out robotic movements. Music and dance are also maps, she reminded us. Maps of the bodies and maps to self-actualisation.

For Marius Waltz, who uses computer code to create startling and colourful, geometric abstract patterns as art, it all started with a Radio Shack TRS 80 color computer that his father brought home when he was a child. That was when he started to discover that he could articulate ideas in code that would translate as visuals on screen. By processing simple computer rules over and over he creates complex artworks, murals of psychedelic explosions of triangles – and computer wireframe wall art that he makes easily by first projecting wire-frame images on a wall and then taping over the outlines with coloured tape.

Julie Freeman, is an artist interested in how art and technology combine who has updated her data based art piece, We Need Us for this year’s NEoN festival. The pieces turns data in to abstract graphic shapes that move slowly, so people might watch it like they’d sit and watch a flickering fire. Julie is interested in the ways that people interact with data, particularly through citizen science projects like ZOONIVERSE where people look at data and classify it. Julie uses that collaborative data to create soundscapes and animated compositions reminiscent of expressionist paintings, featuring raw blocks, patterns of colour and the various spaces in between.

Fi Munro, a Stage 4 Ovarian Cancer survivor shared her battle for survival and what she’s learnt as a result, to the point that now she says cancer saved her life. In 2016, a chemical shit storm called chemotherapy turned her life upside down. She lost her hair and felt constantly sick. After all that she decided to change her life, ditched her stressful job in the city and trained as a yoga teacher instead. When the cancer came back again Fi turned down chemo and become one of the first patients in the country to trial immuno-therapy for ovarian cancer.

Sonja Schwaighofer, a graphic designer from Graz is presently working in MTC Media, a busy Dundee-based web design agency as part of COD100, a project that allows designers to nominate a city of design separate to their own as a place to visit, live and work in for a period of 100 days. Sonja gave us a quirky introduction to her home town in Austria, which is home to a gourmet chocolate factory and as the birthplace of Arnold Schwarzenegger also hosts the Arnold Schwarzenegger Museum, the only museum in the world centering on one person as an attraction.

Paul Dock, a 4th Year Illustration Student from DJCAD closed the evening by sharing what he’d learnt from his taste of Twitter stardom. By posting funny video chats online like his hilarious Transformers audition tape, Dock has been gained thousands of followers and been watched near a million times. His sudden success has put in contact with people he always used to look up to. He’s also gained extra commissions for Leathered McQueer and the BBC platform SCRAM, plus the odd unexpected bonus like the 5 star can of Tennant’s Lager that he received in the post.

What next? Volume 23 is scheduled for January 2019, so if you’ve got something to share contact Creative Dundee now.