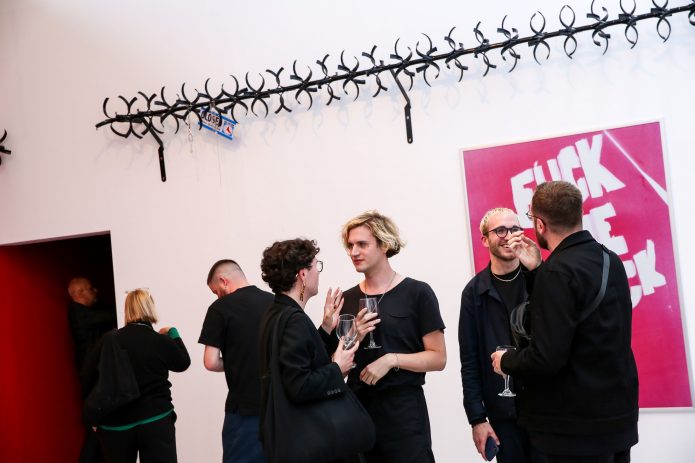 During ‘The Prince of Homburg’, the central video piece of the exhibition of the same name from Patrick Staff showing at Dundee Contemporary Arts this summer, we’re told that feelings are not a joke, that they shouldn’t be trivialised, that they are, in fact, a matter of life and death. One of the key feelings of this exhibition is overwhelming exhaustion, particularly how tiring it is to be a politically engaged queer person.

A response to the play ‘The Prince of Homburg’ by Heinrich von Kleist, Staff uses the play as a starting point and the film is structured alongside the core story beats of the play with sections entitled ‘The Prince is Sleepwalking’, ‘The Prince is Imprisoned’, and ‘The Prince is Executed’. The film itself is a snapshot of Staff’s queer artistic community in Los Angeles, featuring artists and musicians like Johanna Hedva and Macy Rodman talking about their practice and politics.

In conversation with Eoin Dara, Head of Exhibitions at the DCA, Staff explains; “The play was given to me randomly by a friend of mine. He came across ‘The Prince of Homburg’ and read it and then at some point gave it to me. I read it and was a bit bemused and confused about it. This was about ten years ago, but you read things and then you put them on the shelf and you don’t realise how things have lingered in your brain.

“The play is about a prince who’s so exhausted by being the prince that he can’t stop sleep walking and can’t help falling asleep… and eventually he’s punished for dreaming, for desiring differently.”

Such a play is a perfect starting point for talking about queer politics and the violence of living in a heteronormative world, where media outlets debate the validity of transgender identities and queer-bashing and discrimination are still the norm.

Staff invokes this violence in the very design of the exhibition. The larger gallery is set up like a café, with small round tables and chairs laid out around the space, but the mood is sombre and lonely – with some chairs lying on the ground invoking bar fights or hurried departures. The room is dark and the walls are painted red, while along the ceiling skirts a sculpture that looks like the iron spiked railings that protect the private gardens and spaces of cities like London.

“I live between crumbling empires,” explains Staff, who was born in England but lives in Los Angeles. “There is this constant threat, this very beautiful ironwork but it’s so very clear who goes on what side of this ironwork.”

The sculpture carries through to the second room, where objects from the film can be found hanging from its spikes. Prints line the walls. These are photograms, made from dropping selected objects onto photographic paper before exposing them to a burst of light. Again, there is a threat of violence with knives, chains, and swear words being highlighted in the process.

Overall it is not an easy exhibition to engage with. At every turn the viewer is confronted with their own complicity in a system that hurts and excludes, where innocuous objects can prove deadly, and where the politics of death is still barely explored or understood. The legacy of the AIDs crisis is ever-present, while club scenes, abstract colours, and the musical choices remind us that even the spaces where members of the LGBT community are supposed to be safe can prove otherwise – like with the Orlando shooting at Pulse nightclub in 2016.

But if the show makes you feel uncomfortable or afraid, remember that feelings are not trivial and that an exhibition like The Prince of Homburg is supposed to make you reflect not just on art, but also your own exhaustion.

The Prince of Homburg is showing until Sunday 1 September. Various tie-in events are scheduled throughout the summer, including Echo + Harry Josephine Giles on Thursday 11 July from 6-8pm – an evening of multidisciplinary responses to the exhibition led by queer poet and performer Harry Josephine Giles. To book tickets visit: www.dca.org.uk/whats-on/event/echo-harry-josephine-giles