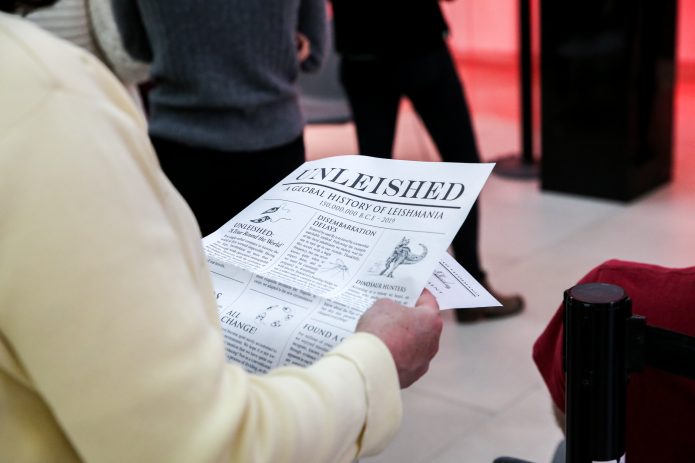 If you were at last year’s NEoN digital arts festival you might have visited the ‘cellfie’ booth to take a picture with some large-scale cardboard cutouts of the Leishmania parasite.

Part of the Para-Site-Seeing project from artist Jen Southern and scientist Rod Dillon (who is also a practising artist), funded by the Wellcome Centre for Anti-Infectives Research at the University of Dundee, their co-commission has now evolved into a full-scale interactive installation at Lifespace Science Art Research Gallery.

As you enter a friendly ‘flight attendant’ greets you and hands you a passport, which you will find stamps for throughout the exhibition. The show itself is split into various zones, including the Departure Lounge Waiting Area, LdBOB’s Twitter Wall, and Leishmania.we – the red gut of the blood-feeding sandfly. 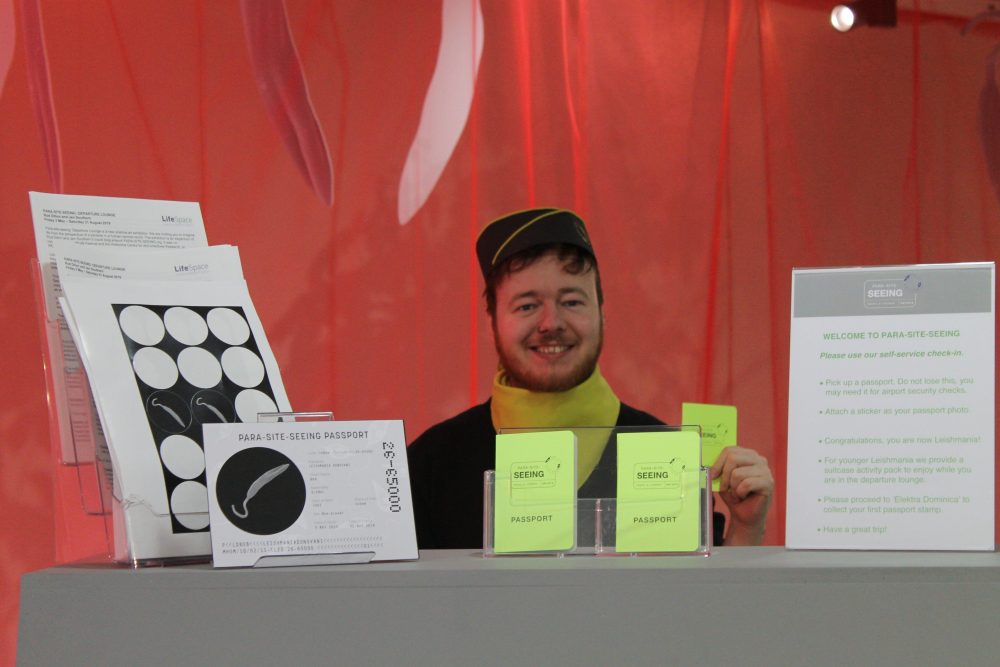 Jen explains: “The original work Para-Site-Seeing was an online commission, so we based the work on the idea of a portal for travel blogs from the perspective of the Leishmania parasite. The new work is an extension of that original project… instead of a travel blogging portal, this time we’ve embedded the narratives into a ‘Departure Lounge’, that people can travel through, encountering different elements as they go.

“We were able to include some new things that help to introduce some of the more complex ideas, the passport suggests that the viewer is a Leishmania parasite, and gives further insight into the names of the blogs. Passport stamps throughout the exhibition are a playful way of getting people involved in the different narratives.”

In one area there is a specially produced newspaper called ‘Unleished’, which details the global history of the Leishmania parasite – including the tendency of their airborne hosts, the simple sand fly, to get stuck in amber and their presence in the blood streams of mummified ancient Egyptians. As with other areas of the exhibition, you can collect a stamp when you pick up the paper.

The show is Holly Yeoman’s first exhibition as the new curator of Lifespace. She says; “The response has been fantastic… it has definitely surpassed my expectations. Visitors of all ages enjoy the interactive qualities, especially features such as the response and Twitter wall where you leave a message for LdBOB – a Leishmania parasite with a Twitter presence.

“As well as this, the exhibition is a great place for our colleagues, some of whom have had involvement in the exhibition, to take timeout from their work in the labs or digital imaging facility – the Departure Lounge Waiting Area is the perfect place to have a read of Para-Site-Seeing’s very own newspaper Unleished.”

Further into the show there’s an approximation of a sandfly gut, all red mosquito netting and ‘red blood cell’-like bean bags. Just like the ‘cellfie’ booth last year you can detach and reattach a cardboard Leishmania parasite from the ceiling and take a selfie with it. 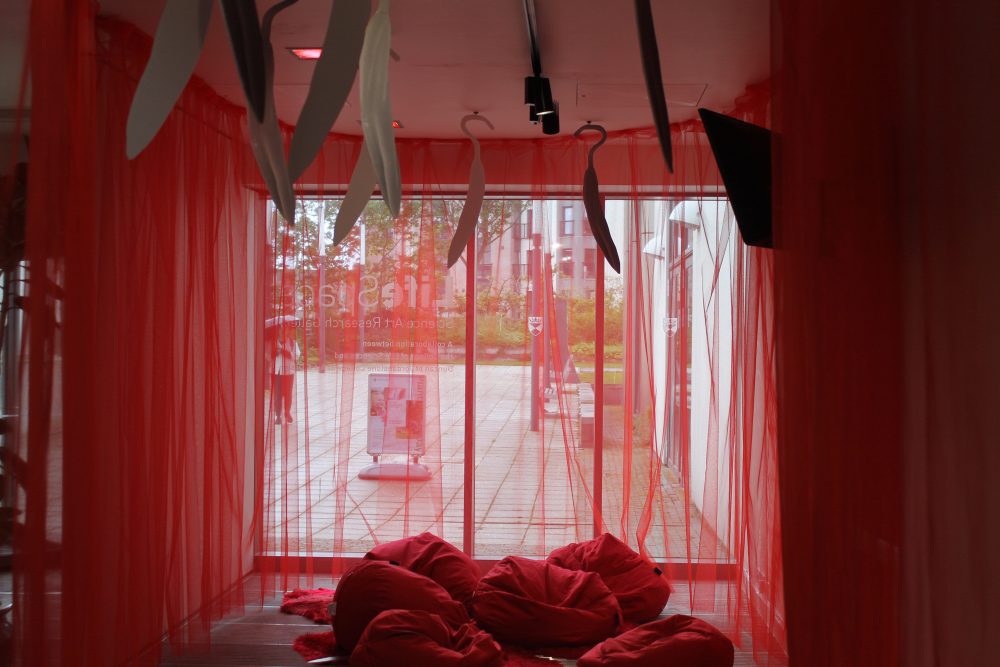 Jen explains: “By making the work into an installation it has enabled us to create physical interactions that are not only fun, but also introduce real parts of the science of Leishmania. For instance, a key element of the sandfly gut area is that you can detach and reattach a Leishmania parasite from the ceiling, mirroring the way that Leishmania adapt to survive inside the real sandfly, ready to reinfect the next person or animal it bites.”

The end result is an interactive exhibition that educates and entertains in equal measure. Check it out and fill up your passport. The show runs until Saturday 31 August 2019.

LifeSpace gallery is part of the University of Dundee and is situated in the School of Life Sciences at the top of Old Hawkhill Road. It is open on Saturdays 11am – 5pm and during the week by appointment. Email lifespace@dundee.ac.ukto make an appointment. Keep an eye on their social media for information regarding workshops responding to the themes of the exhibition @LifeSpaceDundee.