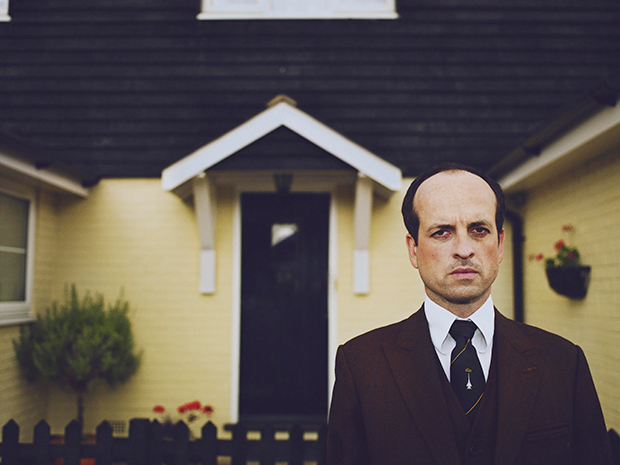 NEoN12 are very pleased to feature Matthew Herbert’s critically acclaimed production One Pig as a headlining event at this years Launch Party.  Herbert’s One Pig album was produced using a radically different approach, pushing the boundaries of possibility in digital recording to tell the story of One Pigs lifecycle.  In order to convey this to live theatre audiences, Herbert commissioned artist and sound designer Yann Seznec to create a unique instrument for the show.  On November 4th, Seznec’s Sty Harp will be used to help demonstrate the story of One Pig to audiences at Dundee’s Rep Theatre.  NEoN were fortunate enough to catch up with Yann before the show, to discuss the production process, his involvement in this controversial show and the ongoing world tour…

[NEoN] Hi Yann, NEoN and Dundee Rep are very pleased to be bringing One Pig to this year’s festival, can you give us some background information about the show and how you came to be involved with it?

[Yann] One Pig is a project by Matthew Herbert, an incredible and world-renowned musician and producer who is very concerned with the politics of sound, among other things. Matthew recorded the birth, the life, and the butchering of a single pig – though was unable to record the slaughter due to legal restrictions. These recordings were then used to create the critically acclaimed One Pig album.

The album is made entirely out of the sounds of the pig. The result is gorgeous and pensive and terrifying all at once.

I wasn’t involved in the creation of the album (so I never met the pig), but Matthew and I met just around the time when he was planning the live show. He’s always taken exciting approaches to performing electronic music, and he was interested in building a physical interface for performing the album that reflected the themes of the music. We went back and forth on a number of ideas before settling on the Sty Harp.”

[NEoN] So the creation of the Sty Harp was especially commissioned for the live production of One Pig.  This is a very novel approach to live theatre production.  What was your inspiration for this project and how does the Sty Harp help to convey the realities of One Pig’s story to a live audience?

[Yann] The Sty Harp is, of course, inspired by a pig sty. It’s roughly designed to look like a fence, and it is filled with straw at the beginning of the show. Because of the size (it’s easily the biggest thing on stage) it’s kind of become a centrepiece of the performance, and in some ways I represent the pig on stage.

As an imposing physical presence, it also conveys a lot of the themes of the album.

It’s a rather difficult instrument to control, for one thing, and making the right sounds can be quite a challenge.

That makes me work hard and struggle onstage at times, which I think is an interesting approach to performance that also might reflect the confusion and loneliness of the pig. The preparation of the Sty is also a very important part of the show, which is a very poignant moment, as well as the time when the sty stands empty…

[NEoN] This sounds very intriguing, it will be interesting to discover the rest of One Pig’s story and the Sty Harp in action!  How did you start out in sound design and what do you see as your first major success break?

[Yann] I’ve been playing music for years, but my journey into interactive sound, music, and performance really started when I did my masters degree in Sound Design at the University of Edinburgh. My professors and classmates there not only blew me away in terms of quality but also in terms of thinking about how I could approach the world of audio in a totally different way.

I would probably say that this One Pig show has been my big break in my career so far. Working with Matthew and the rest of the band has been an incredible opportunity for me, not only from a professional standpoint (playing the Royal Opera House, Berghain, STRP, and Liquid Room Tokyo, among others…), but also from a creative and personal point of view.

I am brimming with more ideas than ever, and everyone in the project is totally amazing.

[NEoN] So there are plenty of more exciting projects in the pipeline then.  In addition to your current work as a sound designer, your company Lucky Frame, produces a diverse range of products.  From games and software to musical instruments and mobile apps.  How did you branch out into these fields?

[Yann] We do work on a number of different projects…I think it reflects my inability to concentrate for a long time on a single thing! For some reason I always find myself working on loads of different projects at once, and that keeps me sane. There is an element of necessity as well, of course…I think most people trying to make a living in the creative industries need to have lots of stuff going on.

But more importantly, I see all of the things that I work on both on my own and with Lucky Frame as conceptually related. I’m really interested in sound and music, of course, but in particular I like to look at interface and interaction.

How are people understanding, playing with, and experiencing sound? How can we play with and manipulate that interaction? What are the social and cultural boundaries that sound and music have to deal with?

I think you can look at all of Lucky Frame’s work through this lens, whether it be One Pig, or a music game for iPad, or an experimental youtube video remixer.

[NEoN] Do you find it easy to focus on several projects simultaneously and how do you manage the transition between your different roles?

I wouldn’t say it’s easy to focus on different projects simultaneously, but it is something that is manageable provided I’m working with good people on good projects. Ultimately I’m someone who likes being able to switch between different things, it helps keep me fresh, and I’m so lucky to be able to do that. Transitioning between different roles could be hard, but at the moment I don’t feel a big difference between the various projects I’m working on – they are all about creating and producing good work, which in the end is not all that different whether you’re making a pigsty or an app.

[NEoN] What would be your advice to someone wishing to follow in your example?

Make stuff! Everybody has ideas, but very few people act on them. People are very good at finding excuses (“I don’t know how to do _________” is the most common).

Figure out what you can do and make it happen. Imagine, Create, Learn, Repeat.

[NEoN] Some inspirational words for our aspiring creative’s out there.  Getting back to One Pig, the tracks for the show were named after each month of the pigs’ life.  Is there a particular track you enjoy playing the most and why?

It’s funny, I think everyone in the band goes in cycles about what track is their favourite. Recently I’ve been really into December, which is super funky when we play it live.

August is amazing too, if only because our keyboardist Sam Beste rips some totally kickass solos on there.

[NEoN] What do you personally hope to experience at NEoN 12 and what else are you looking forward to seeing at the festival?

Unfortunately we are going to be off on tour so I won’t be seeing much of the festival myself! I think Lucky Frame will be having a presence at the Indie Game event at DCA, though, since we fit pretty neatly into that category – and the Pecha Kucha night looks brilliant!

Pippin Barr is a genius, I’m gutted to miss out on it.

[NEoN] Thanks very much for you’re insights Yann, we can’t wait to see One Pig now.  All the best with the tour and we very much hope to see you back at next years NEoN Festival!

[Yann] Thanks very much!

For more information about One Pig and the rest of the NEoN12 Launch Events please visit our Launch Party Page.  Tickets for One Pig can be purchased from the Dundee Rep Theatre Box Office – 01382 223530