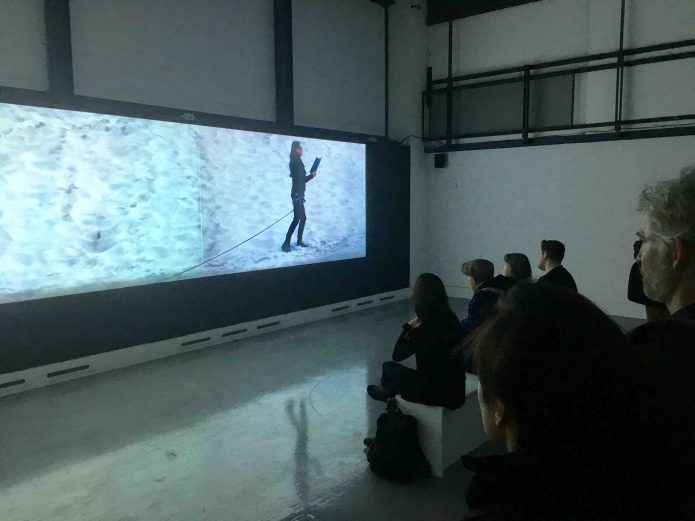 We have reached the end of NEoN Digital Arts Festival 2017, a programme full of thought-provoking exhibitions, exhilarating performances, one-of-a-kind workshops and much more! All of these unique experiences were tied together by the theme of Media Archeology, so we can’t help but imagine how we will be looking back this year’s happenings…

So, here’s a quick roundup of some of the things that stood out this year!

There was a lot to be seen this year, across West Ward Works, DCA, Generator, McManus, Mills Observatory and more, internationally renowned artists were showing some incredible work. Performances were also an immense part of this remarkable work, specially at NEoN At Night – the sold out evening of an all out audiovisual spectacle!

Special mention also needs to go to Geltung [Validity] at GENERATORproejcts. An exhibition that was as immersive as it was stimulating. On the Thursday night of the festival we saw some of these pieces in action, through the performances and presentations of the artists.

In fact, the Thursday night was a great way to explore the festival. From the powerful Records and Wireframes, to DCA’s ECHO and then Generator and West Ward Works – we got to see varying visions of a theme, in a presentation custom-made for Dundee.

We really can’t say this enough, without all our volunteers none of this would have happened! So for anyone who helped us out before, during and after the festival – thank you!

Tomorrow we’re doing a post just about our volunteers so keep an eye out for that.

Well, the @weareneon take over of West Ward Works is darn delicious! What a job guys! Can’t wait to see the rest of the fest! #neondundee pic.twitter.com/7jkHZ0nE32

NEoN also became a forum for significant conversations on the festival’s theme. From debates and forums to talks and conversations in between venues. The pieces were once again immensely relevant to broader world issues and struck a chord with people in Scotland.

‘The area we filmed in is known as the place where the souls of bears go to dance’ Paul Walde, who is also exhibiting at Centrespace. #neondundee pic.twitter.com/cqntUNHe2f

“We need to work with people to find out their hopes, to find out; ‘where do we want to be in the future?’” @i_serena at #neondundee pic.twitter.com/SSpM5iAgVH

The partnerships we make during NEoN are way too many to mention, but probably one of the key elements in making the festival something that can make Dundee truly proud. This year’s programme included events in venues all around the city, from the Mecca Playhouse to the Mills Observatory. It was a great experience for local people to find new creative corners and visitors to get a feel for the city!

Here’s NEoN’s own @ClareDundee talking about all the amazing things we’ve seen this evening! #neondundee pic.twitter.com/R73GMIxLwx

All the workshops this year were fascinating. Just the perfect mix of interesting, practical and hands-on. Let’s make a special mention of the Activity Space at West Ward Works, where some of these workshops happened. It was also a great place for the whole family, with retro tech and a play area for kids.

If you thought good art was only in the main galleries, think again… #neondundee

Made at NEoN Activity Room! pic.twitter.com/wr62kgg8As

If you have been to NEoN this year, THANK YOU! We hope you had an imaginative and fun time like we did. There is still a lot of stuff online about the festival, so be sure to explore this site and find some hidden gems.

See you next year!