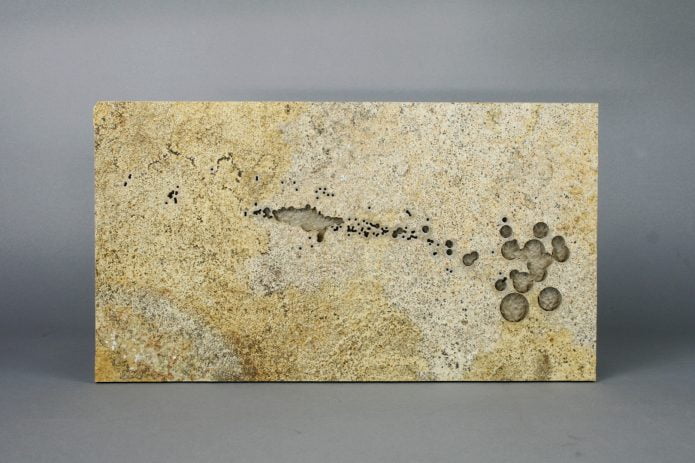 NEoN caught up with Scott Kildall, an artist from San Francisco who has been working with a high-pressure waterjet cutting machine to recreate the dispersal patterns of meteorites and etch them into stone. The pieces, collectively entitled ‘Strewn Field’ will be exhibited during the festival in November.

What is a Strewn Field?

A strewn field is a technical term and indicates the area where meteorites from a single fall (asteroid) are dispersed. When an asteroid enters the atmosphere it often fragments into many pieces before impact due to the thermal shock of the Earth’s atmosphere, these fragments are known as meteorites. When they hit the ground, these meteorites make a spread pattern that tells us about the trajectory and composition of the asteroid.

Do you have a background as a stone carver/etcher? Before these digital technologies existed did you work with your hands, or have you always had a mechanical element to your work?

This is the first time I’ve worked with stone as a sculptural material. I try to select material that reflects the concept of the work. In this case stone is what we find on the earth. The high-pressure water from the waterjet acts like the kinetic energy of an asteroid and so the process is violent, yet predictable.

Only recently with the increased access to digital fabrication tools have artists such as myself been able to work with machines such as 3D printers, the waterjet machine and other CNC tools. Before then, I would work sculpturally, but not so much with mechanical elements. I see this particular work as a collaboration with the machine rather than mechanical in nature.

What is your preferred stone or geological material to work with?

Not to soft and not too hard. Quartzite is my favorite stone. It has flecks of reflective material in it and the surfaces look quite beautiful.

Where did your interest in meteors come from? How has it developed over the years?

Small bodies outside of our atmosphere such as asteroids and comets have both the ability to destroy life and help create it. Although not conclusively proven at this point, many scientists believe that impact events help chemically catalyze life on earth with the introduction of heat and complex minerals.

So, there is this potential that asteroids represent.

How does a water jet cutting machine work? Why did you start using one, and what do you mean when you say you “collaborate” with the machines you work with?’

I have access to a waterjet machine through the Pier 9 Creative Programs at Autodesk, which led me to think of creative ways to use that machine. The waterjet is like a laser-cutter on steroids. It emits a 55,000 psi stream of water and can cut through any material, including 6” thick steel.

I began to think of the possibilities for etching into various materials. Could the machine be harnessed or tamed? It seems to have a mind of its own and water is unpredictable, creating gouges and surface treatments that are otherwise unknown.

Before an etching session, I talk to the waterjet machine and make friends with it. I can’t tame it but can only cooperate with it.

Do you consider your work to be archeological, in terms of uncovering data that might otherwise be lost?

Not so much. You can only glean a bit of the data in the artifact itself. It is only archaeological as an art object.

How long do you hope your work will last, both in its physical locations and online?

I’m not so concerned with its online presence. It will probably die in virtual space soon after I do and I’m okay with that. As a physical object, I would like to see it last hundreds of years.

Etching into stone has that capability for longevity; some of our oldest signs of ancient civilizations were from making marks in rock with tools.

Can you tell us a bit more about your relationship with the SETI Institute?

I’m currently an artist-in-residence there. Its a two-year program, so is a bit of a slow cycle. The scientists there are super-busy! For various projects, I collaborate with a scientist and will use their data and understanding of various phenomena.

For example, with Strewn Fields, I collaborated with Dr. Peter Jenniskens, who provided four datasets of various strewn fields. He helped me understand the general idea of meteorite impacts and how they fall. I showed him samples and we had many discussions about aesthetics.

When I first showed the Strewn Fields series last fall, he came to the gallery with his collection of meteorites and we set up a table for him to talk about the meteorites with the art audience. It was a real hit! People loved having him there.

Wow, that’s a big question. The short answer is that with what I reluctantly called “data art” you can tell a story about some invisible phenomena — be it human-made or naturally-occurring that people would not normally see or think about.

It also lends itself to augmenting the conversation about art. It has only been recently that it has been possible, with access to powerful computers, to process massive datasets. And so, data is like an artistic material.

But that’s more about data art. Data-visualization is such a huge field that many people have written books about it, so I’ll just stick with answering about data + art.

You talk of “embracing the glitch”, were there any glitches while making this work?

Yes. Each piece has subtle variations. Though the data was clean, glitches happen in the way the water bounces off the surface of the stone. Sometimes it creates pockets and fissures in odd places. When you look at it carefully, you’ll notice deeper grooves along the top edge of all of the data-etches. That has to do with the traversal of the machine. So, often a glitch happens in the translation from the digital into the physical.

For NEoN your work will be part of a group exhibition. Are you familiar with the work of the other artists in the exhibition, and are there any you’re particularly excited to be placed alongside?

I haven’t seen the list of other artists in the exhibition yet, so am very curious! Of course, this is always part of the work — the context such as the institution, curatorial directive and the other artists involved. I always find this unpredictability to be exciting.