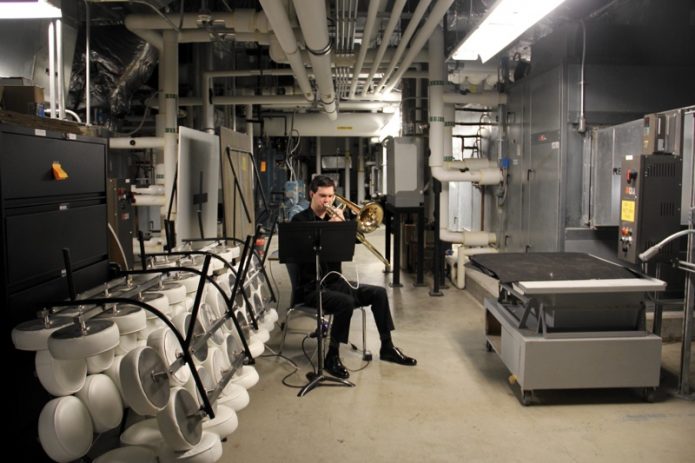 NEoN caught up with Knifeandfork (Brian House and Sue Huang) to discuss the ideas behind their collaborative work, in particular their seminal piece Arrangement for Building and its potential application in Dundee. 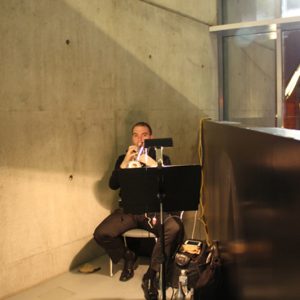 Can you give us some background information about yourself?

What is/ who are Knifeandfork?

SH: Knifeandfork is a collaboration between Brian and I that we started back when we were classmates at a graduate program in Sweden in 2004. We started out playing around with interactive narratives in physical spaces and made this noirish filmic story for the Kulturhuset in Stockholm that used Bluetooth and handheld PDAs. It was early experimental days of using mobile devices in art installations and we were playing around with ad-hoc strategies like embedding Bluetooth devices in bowls of uncooked beans and rice to control range–stuff like that. We have since done projects together at a bunch of different institutions including the Beall Center of Art and Technology in Irvine, the Museum of Contemporary Art (MOCA) in Los Angeles, and the Contemporary Arts Center (CAC) in Cincinnati. We like to describe our work as dealing primarily with reconfiguration of existing structures, whether that be social structures, physical structures, etc. and we often engage with various new media, experimenting with ways in which new tools can be pushed for use in our installations and furthering our understanding of the ways in which various technologies have intersected with our lives. For example, in our Emptiness is Form piece at MOCA Los Angeles in 2009, we utilized the fact that everyone had cell phones to mash together some commercial technology (RFID tags) with an audio improv type performance in order to create a dispersed, mobile, participatory sound installation.

Can you explain how Arrangement For Building worked?

SH: The musicians were stationed all around the seven floors of the building that the Contemporary Arts Center is housed in (in Cincinatti). The building was designed by the architect Zaha Hadid and is famous for its expansive stairwells which slice through the centre of the building. The stairwells are open to each other and to the galleries on several floors, and the steps are both broad and low, setting the pace for walking through the building which is simultaneously leisurely and monastic. There are also many hidden spaces of the building such as the administrative offices and the penthouse (AKA the machine room). Each musician had a small computer (a Raspberry Pi) at his/her station and received instructions at set times from a centralized voice command which acted in a sense as the conductor. As visitors walk through the museum, they can hear the various musicians playing in synchronicity with each other. Yet, at no point can they ever hear the entirety of the orchestra playing together.

Where was the physical orchestral database and how were people able to access it?

SH: As the visitors walk through the space, they are in a sense playing the piece as they create their own sound mixes through the act of walking and gallery viewing.  I envision it as a kind of invisible spider’s web being drawn through the space as each visitor chooses his/her own path through the museum, and each path comes with its own set of acoustical experiences and performance dynamics.

Brian, how has your current PhD programme at Brown influenced your thoughts about the piece. Is there anything you’d now do differently?

BH: In many ways, my research at Brown is just a more formal extension of the ideas Sue and I have explored through practice. There’s always (or should be) an element of unresolved-ness in Knifeandfork projects—the odd combination of activities and spaces, or the misuse of technology—and this exposes some of the underlying mechanisms of art and media. Arrangement for Building has something to do with the disjuncture of sensory experience that we have in a networked society, and also something to do with the inherent physicality of networks and the architecture they inhabit, an architecture loaded with its own power relationships. At Brown I’ve talked about similar things from a theoretical standpoint. But it’s ultimately most interesting to start with art, by constructing a situation to play within, and for me that drives the process.

Who was/is the ideal or intended audience for Arrangement For Building? Is it the building itself, the members of the public within the building, of a digital audience viewing footage or material from the performance after the event?

BH: All three! I love the thought that it is the building itself. I think in coming up with the work, we were thinking about the public coming to the museum. But they are implicated as well—part of the performance is how they move through the space. So the perspective is manifold, and we shouldn’t leave out the musicians as a certain audience either.

SH: Yeah, I agree that all three are actively involved as audience. And some of these roles also cross-over into those of performers (building, musicians, visitors to the piece). As in many of our works like 5 ’til 12 or The Hand of God, there is a complicating of the roles of performer and audience, where the perception of who is who and what is what begins to fluctuate. For example, for a visitor walking through the building, they are in one sense audience, but without their act of walking and participating and physically engaging with the building, the piece would not have material form, hence they are also performers. 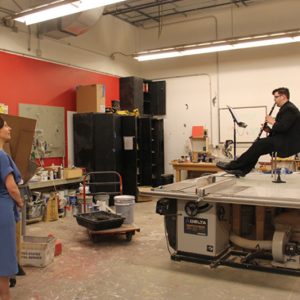 If the possibility arose of being able to stage the Arrangement For Building in Dundee, how might you go about doing that?

BH: It’s of course speculative at this point, but I think the idea of moving from an art museum as a site to a city is really a compelling evolution of the concept. In Cincinnati, we tried to position the musicians in non-obvious locations (like stairwells, offices, and the workshop) that altered the public’s perception of the space. I think we’d look for that in Dundee as well.

SH: It would be interesting to move away from the formality of a contemporary art space and into a public urban environment with all of the spontaneity and unpredictability that comes along with that. Technically, I think we would be looking into a shift away from the wired technologies that we used in Cincinnati and towards mobile technologies. That will simply arise out of the physical needs of being out amongst the city environs and away from the socketed wired world of a building, but it will pose some interesting questions conceptually for the work.

What excites you about sound art and acoustic ecology?

BH: I think it’s all about approaching the world through its inherent relationality. That’s something that sound is good at, especially in a culture which tends to be visually and semantically dominated. How things feel, how they affect us in inarticulable ways, how experiences are ephemeral—these are all endemic to the sonic. However, we don’t fetishize or restrict ourselves to any media or mode of operation, and we’re not sound artists per se. It’s always a matter of responding to the dynamics of some particular situation, of finding ways to be sensitive to it.

What does digital art mean to you? How is it, and new media more generally, evolving for you?

SH: Digital art could take many forms, but most meaningfully to me, it would make use of the digital to create work that could not have previously existed. But even more importantly, the work would speak to the wider societal changes that have emerged as a result of the digital. I would say that with Knifeandfork work, we have typically avoided approaching this topic directly in a linear fashion. Rather, I think it has been more interesting for us to come at it sideways and diagonally, or really from any direction rather than head-on, and as such, the technology and digital aspects of our work are not always directly apparent. For example with Arrangement for Building, many people were often surprised to hear that we used this digital network to sync together the musicians since the computers and technology are not readily visible to the audience. But the musicians and the piece conceptually speaks directly to the digital nature of our dispersed and simultaneous communication systems. It mirrors the nature of TV, radio, the Internet, chatrooms, and Pokemon Go.

How does the discipline and/or concept of architecture intersect with your work?

BH: It’s true that much of our work responds to the architecture of cultural institutions. One thing we talk about is how buildings shape not only our physical movement within them, but the character of our behaviour, our attitudes. An art museum is a perfect example—people in a museum have a very particular walk, or even a sort of saunter if you will, as they go about looking at paintings. This comes from the social codes that make a building into a place and what our expectations for that place are. Our strategy is often to try and shift those codes in another direction, to treat the physical building as a media that we can reconfigure for another purpose. To bring up the example of Emptiness of Form again, we had a few visitors who became very upset when not everyone was strictly following the rules of mini golf. We loved this! We’re in the stairwell of a major art museum and people are insisting on codes that have ostensibly nothing to do with normal art-going behaviour. It’s a playful example, but I think there is a politics in our work when we play with how malleable “architecture” really is.

What are you working on and/or excited by at the moment?

How do you feel about NEoN?

SH: We’re excited to be thinking about this new piece for NEoN!

What a lovely chat! Both Brian and Sue raised a number of interesting points, such as the idea that the musicians in Arrangement for Building are also an audience for the piece, and that art can comment on how digital technology shapes our lives without necessarily using it to explicitly make the work. We’re so excited to have been able to discuss these ideas with Knifeandfork and look forward to building a relationship with them in the future.