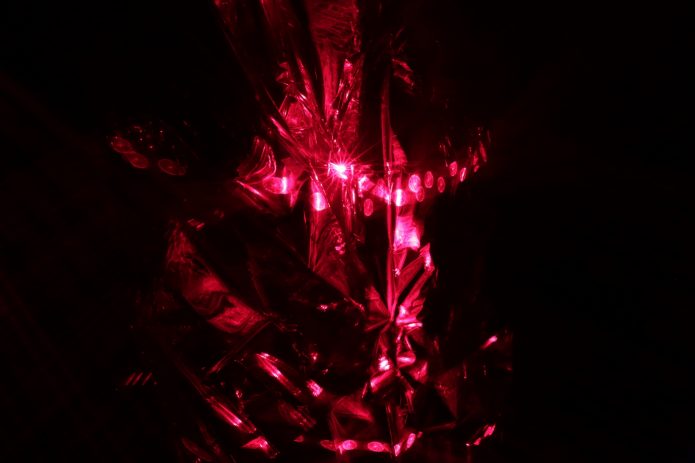 Thêta Fantomes is a multimedia installation exploring the connections between video gaming, art and current neuroscientific ideas, made by artist collective APO33.

It will be available to experience at DC Thomson’s West Ward Works on Guthrie Street throughout the festival. Interview conducted by Ana Hine.

What exactly is Theta Fantômes? Is it a game or an experience?

Thêta Fantomes is a cross-disciplinary digital game+art project. It’s an art piece developed by APO33 to realise some of our ideas about using real-time neuronal data processing with game play in a hybrid transcendental experience.

At the moment we have built two possible aspect of the work: one is related to performance, a presentation that fits into timing restraints, where the performer could become part of the collective or an outside participant. The other is an installation, which can be presented as part of an exhibition. The piece is not a fixed work, but artists’ research that we expect to evolve into different versions, our approaches to sculpture, performance and art works in general are planned to grow and create different variants, they are rarely seen as stable oeuvres.

Thêta Fantomes is actually both a game and an experience but it is also an artwork. We don’t want to separate these three aspects. Games are very logical and frequently work with strict rules, but the pairing of games and art raises a lot of issues such as; how can artistic concerns be retained, so they are not lost in the “fun” aspect of the game? The game experience tends to overwhelm questions arising through the art, and we find ourselves asking what is the purpose of the Thêta Fantomes game? We implemented characteristic gaming functions, such as; a game over / win scenario and various levels in between. However, this is related to the composition and we didn’t compromise on the main points that define the art perspective of Thêta.

Thêta Fantomes questions the future being, using our brains to move objects and avatars, visualising space with laser that calculate and measure our architecture and compose musicality anew. When we said that it is not only experience, we mean that it also creates new reading of the space, a new score for a music yet to come (not existing) and always changing (depending the performer/participant) but also it creates some paradoxical relations to the self, projected into a moving platform piloted by brain waves.

How do EEG interfaces work?

EEG interfaces such as the one we use include sensors that amplify electrical brain activities. They read the electrical properties of biological cells and tissues and measure voltage changes or electric currents on a wide variety of scales from single ion channel proteins to whole organs like the heart.

In neuroscience, it includes measurements of the electrical activity of neurons, and particularly action potential activity (short-lasting events in which the electrical membrane potential of a cell rapidly rises and falls, following a consistent trajectory).

Once you have the result of the electrical activity of neurons you basically only have numbers, which could apply to any type of interpretation including those related to scientific experiments and theories of explaining behaviour. This is where we part ways with scientific method and transform those notions of the human being. We transcend the informations received to question the real and who we are (metaphysically) here and now.

APO33 members have all become interested and inspired by neuroscience at different times. At the end of the 90’s there were all those experiments with mice with the nervous system transmitting through a network, which provided us with one of our first encounters with the idea of neuroscience applied to art. However, there is, even now, an awkward relation between the use of the living animal and the machine, a forced hybridization that didn’t really seem to work. One of our members, Jenny Pickett, had some experience as a “test control subject” for a neuroscience department in 2007, while she was doing her MA at Goldsmiths, and it had an impact on her work and the way she was thinking about the possibilities of using EEG, which was already concerned with psychological mapping. Another of our members, Julien Ottavi, has long been interested in neurological research and practices and was heavily influenced by Alvin Lucier’s music piece using EEG in 1965.

We started our concrete experience with the EEG and brain waves in 2013 when we started to realise musical compositions with this type of sensor.
Our interest in neuroscience could be seen as a critique of this scientific field of research, we are trying to propose other points of view and other ways of experimenting with brain waves that not only explain the way humans work, but suggests that the electrical activities of neurons could be used to manipulate objects and transform our reality while creating new perspective for art, music and architecture.

Do you think art can help people better understand scientific ideas and theories?

Our art does not aim to make scientific ideas or theories understandable, but rather to question and change the perspectives that modern science attempts to impose on humanity.

Separation of art and science is quite recent in our history, these fields were once closely connected and the exploration of the world used to be more transdisciplinary. Since the acceleration of dismantling the body and the living in general, via the great anatomical research, we entered another level of Cartesian monstrosity in science. God was only a short moment in our history, it appeared that humans swiftly took hold of their destiny with the desire to become as god and create the “living” in their own image.

Modern science is all about human cloning and extensions (robots and artificial intelligence), yet the non-binary and alter-cybernetics views were left out as an alternative path to capitalism. Effectively science and capitalism became the double face of a reality that has overwhelmed us as humans.

That said, art is not against science, we do look for a bridge somewhere between the two. We also try to make the developments in science work in our favour and for our desire for another world. In the case of Thêta Fantomes we are not helping science to be more understandable, we are putting forward new perspectives and a new way for everyone to experiment with their brain waves. Our method is probably more akin to the “amateur”, than to the accredited neuroscience labs’ approaches, though the questions remain: Who are we? Where are we trying to go? What are we trying to achieve?

Is Theta Fantômes intended to be transcendental or religious?

Thêta is probably transcendental and not at all religious, not in the monotheist definition at least and certainly not in the sense of the church. If there is supernatural phenomena here, it appears to be in direct relation to our notion of the self and its reflection in the ghost, this (non)presence that we could not define. Fantomes or spectre are part of this illusion we fantasise, it is somehow this “other” that haunts us, this imaginary “thing” that will frighten us and delve deeply into our fears.

Thêta waves are linked to certain states of mind such as: day dreaming, creativity, meditation, paranormal phenomena, out of body experiences, ESP, shamanic journeys. So in a sense Thêta Fantomes, is rooted into psychoanalysis, philosophy and ritual or shamanic practices. Psychoanalysis because we are not trying to understand the way our brain works by plugging in some electrodes, but by seeing its potential for what appears to work beyond ourselves, exceeding our direct control by combination of unexpected results. Philosophical questions are raised as we try to asses our own project in relation to the field of research we’re exploring, whether it’s art, neuroscience, robotics, architecture or music. Concerns about the shamanic also appear, can this be compared to the historical practices of “shamanism”, calling for spirits in order to challenge the real (for cultural, medicinal or any other reasons)? Because your brain is connected to this empty mobile representation that moves depending your brain neural activities and that embody somehow a visualisation of your minds’ actions, calling for the spirit that inhabits you, out of reach from your consciousness, the music composition could be seen as part of a ritual to incarnate those spirits.

What do you hope to achieve with Theta Fantômes?

We are not entirely sure about this.

Surely we can re-affirm that we are trying to cross different disciplines and various ideas that surround our brain activities. We are also trying to propose other points of view and practices not dictated by the reading of grids and results. It might be possible that we won’t arrive anywhere particular as such, but the experience of searching and combining new formulas for our artistic questions will certainly enrich us and those who will be exposed to the project.

How does it relate to other work you have produced over the years?

Thêta Fantômes is connected and linked to some other works we did such Subtecture: mainly on the question of the deconstruction of the architecture, but also the Bot – a real-time musical composition controlled at a distance using sensors and a connected network. Otherwise brain waves, lasers and mobile platforms are pretty new in our research.

What about NEoN digital arts festival are you looking forward to?

The Nemesis Machine by Stanza, we’ve have heard about it but never seen it, so that looks a good thing to experience. 3G Flatland also seems to be an interesting work. We would like the time to discover all the works that will be shown there, see things that we don’t know anything about or we don’t expect. We also like to be part of a festival that takes risks and NEoN seems to be really serious and fun at the same time without compromising on the content. We’re really looking forward to it.