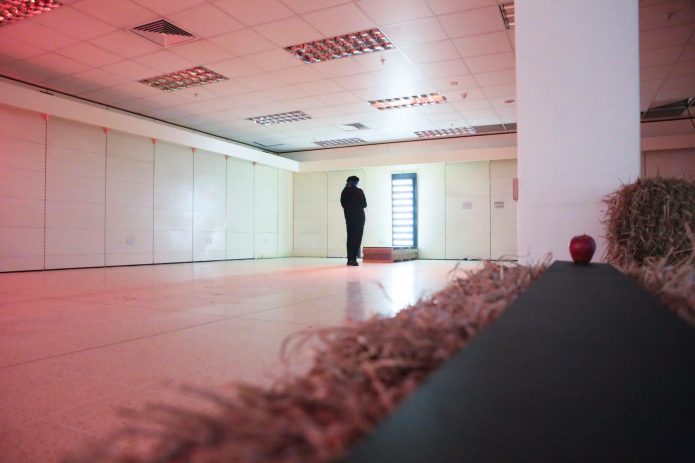 There’s only a few days left to see AL and AL’s specially commissioned work as part of NEoN digital arts festival’s ‘take over’ of the Wellgate shopping centre.

In their piece, the ‘Immaculate Conception of Isaac Newton’, artists Alan Holmes and Alan Taylor, known professionally as AL and AL, propose that the birth of the scientist could replace the traditional story of Christmas. In their exhibition at the Wellgate shopping centre they are inviting members of the public to experience their “new nativity” idea – celebrating the birth of Isaac Newton, who was also born on 25 December.

“We thought it would be wonderful to stage the ‘Immaculate Conception of Isaac Newton’, which features Isaac’s fetus growing inside Hannah’s womb, and emerging into the world in an installation formed from hay bales; a new nativity scene for a new belief system, in a shopping mall readying itself for Christmas,” explained the Manchester-based artists.

AL and AL have transformed the empty Unit 26A – which used to be the Iceland store – into a high-end art gallery with their show Down The Rabbit Hole. Inspired by the Nursery Rhyme clock in the Wellgate, the artists started thinking about the time and the way it is measured, as well as the importance of birthdays.

“Dundee’s most loved clock, located at the heart of the Wellgate shopping centre, is a Nursery Rhyme clock that has mesmerised generations of children in Dundee,” they said. “Inspired by this magical timekeeper we began to think about how the scientific revolution has transformed our understanding of time.”

Weave by Abertay have also taken over the vacant retail Units 9-11 on the second floor on behalf of NEoN with their group show ‘Lifespans: Forever And Ever’. An exploration of the expansive and endless nature of our digital lives, it includes interactive work by Cassie McQuater, Hadi Mehrpouya & Robert Powell, and Tale of Tales, as well as a large wall piece by Marius Watz.

NEoN festival director Donna Holford-Lovell said: “Being in the Wellgate Shopping Centre has been awesome. It’s amazing to see unexpected digital art works in public spaces. We have had great conversations and engagement with an audience that wouldn’t necessarily experience this kind of contemporary art. People were surprised and amazed to see such work in their local shopping centre going about their everyday lives.”

Down The Rabbit Hole – which includes the ‘Immaculate Conception of Isaac Newton’ – will be open to the public until Sunday 18 November, as will the Weave by Abertay group show. Entry to both is free.