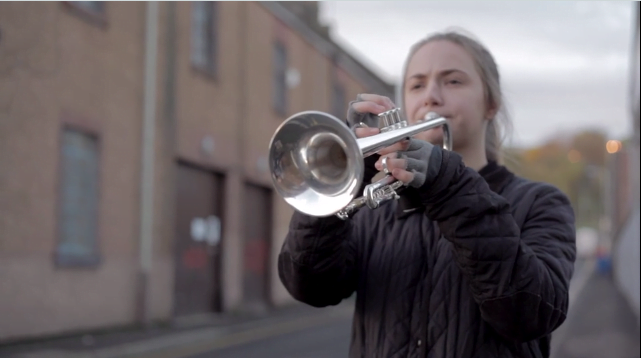 On Saturday 12 November Brian House and Sue Huang, also known as Knifeandfork, took to the streets of Dundee’s Blackness industrial estate to debut their commissioned piece for NEoN, Oh Dear Me.

Oh Dear Me from Sue Huang on Vimeo.

The truly unique piece saw a series of musicians situated along a path winding through the historic jute mills of the Blackness area of Dundee. Visitors were invited to type a message into a computer at either endpoint of the path, and their words were then encoded via fragments of The Jute Mill Song (Oh Dear Me), a folk song written around 1920 by Dundee mill worker and labour activist, Mary Brooksbank. The musicians subsequently passed the music to one another by ear until the message was decoded on the opposite terminal. Along the way, the melodies cascading through the city reverberated in urban spaces associated with Dundee’s industrial past and connected historical textile production with the contemporary labour of our culture of computation.

The performance, with musicians from Scotland’s Red Note Ensemble, occurred as part of the NEoN Digital Arts Festival on Saturday  November 12. The performance began at Verdant Works, Scotland’s Jute Museum, and then began to meander around the Blackness industrial area before finishing at the former DC Thomson Print Works, West Ward Works on Guthrie Street. Visitors were invited to interact with the system at either endpoint and to walk the neighbourhood, encountering the musicians as they wander.

Filming thanks to Bonnie Brae Productions.