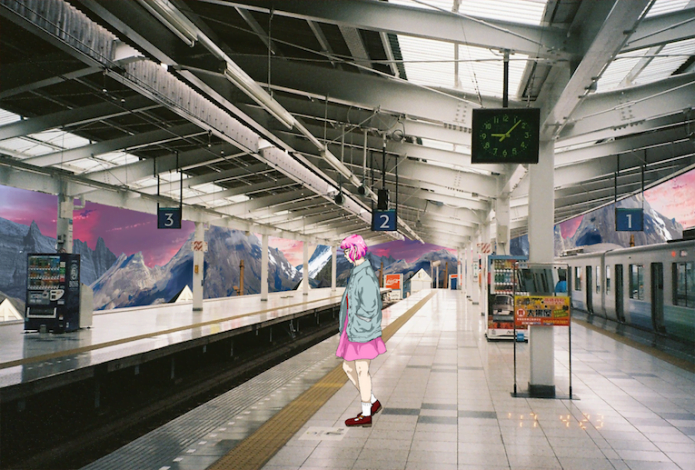 As part of NEoN, Generator Projects is currently hosting an exhibition entitled ‘Geltung [validity]: perception of a natural right’. Blogger Ana Hine caught up with one of the artists involved, Newcastle-based Petra Szemán, to discuss her video-based piece ‘I keep forgetting I’ve been to Tokyo: GAIDEN’ as well as her wider practice as a zinemaker and multi-media artist.

Did you make any zines while you were in Tokyo?
I didn’t – mainly because I’m more of a retrospective zinemaker, but also because aside from Tokyo I also travelled to some remote islands in the South of Japan, and I was already carrying hiking gear and two cameras. I did make a travel diary-esque zine after my trip however, based on the notes I wrote in my phone while I was there. I tried to keep an actual diary during the trip and planned to scan that and turn it into a zine, but ironically, despite my obsession with my own self(ves), I’m very bad at following through with real time diaries.

Why did you choose to have three screens and how did you decide upon those particular moments?
All the base backgrounds I use in these videos are (often analogue) photographs that I took in Japan. As I went there on a research trip, all the locations I visited were significant in a way, so I choose from these captured moments either based on the location and its relation to the narrative I’m presenting, a personal memory, or just aesthetics.

I started out the video with the just the left screen, which uses a photo I took in Chichibu, a small city two hours from Tokyo. It’s a fictionally saturated place in that it’s part of a pilgrimage route that connects 34 Buddhist temples and also it’s the city where an anime called Anohana takes place. Upon arrival, you are given maps that lead you through the pilgrimage, and maps to the locations featured in Anohana – a different kind of removed experience.

When I visited, I made a point of sitting down and reading a book by Jorin-Ji temple (number 17 in the pilgrimage), which is where the main characters also often spend time. I wanted to reflect on this by placing Yourself (my virtual self) in that place where all these realities cross, idling in a looped scene. I added the other two screens later as the narrative and point of the video unfolded – the middle screen is a platform at Hanno station where I had to change trains to get to Chichibu, the right screen a shrine that’s part of the Jinda-Ji temple complex in Chofu, a suburb in West Tokyo. I chose Hanno as a conscious connection to Chichibu, and Chofu as an aesthetic choice, but the neighbourhood surfaced in the narrative in the end. My choices and working processes are often very convoluted and introspective.

You describe yourself as an ‘unreliable narrator’, what do you mean by this?
In an interview, writer Lidia Yuknavitch summed it up like this: “We are ALWAYS experiencing life as a series of chaotic retinal flashes. Then later we smooth it over by making narratives that make sense. We call this memory. We give things a beginning, middle, and end.”

In this way, I’m a narrator because I perceive myself as a person with an identity narrative. Partially by referring to myself as unreliable, I’m referring to the process that these raw experiences have to go through for them to make sense to me – they’re mediated by the personal mythologies that I have constructed for myself from a multitude of characters and ideas introduced to me in real life or in fictional worlds that I have consumed. My memory is not impartial, it’s a subjective and therefore unstable narrative device. This of course is based on the assumption that my identity is not something I was born with and inherent, but something more performative and shaped by information available to me throughout my life.

How does the artistic culture of Newcastle influence your work?
The art scene in Newcastle is quite open and playful, which I think comes through in the tone of my work mainly, but it’s a subtle influence. I’ve only worked in Newcastle, so I can’t say for sure, but I think the city’s openness is partially what allows me to confidently work with pop culture elements and mundane aspects of life.

What attracts you to animation and computer games?
I mainly enjoy the aesthetic and the nostalgia factor, but I also like the ways identities and narratives can function in RPG games, and the explicit nature of immersion in virtual realities. My connection to animation is more genuine than it is to gaming, though – I only started gaming a couple of years ago, but I grew up watching animes on YouTube, with questionable English subs and uploaded in three parts, way before I spoke substantial English. Maybe my fascination with animated worlds stems from a core childhood nostalgia heightened by the fact that at the time I didn’t even understand the details of the narratives because of their inaccessibility to a Hungarian 10-year-old in 2004, and I got more of a holistic sense of anime rather than connections to specific stories, which makes for a stronger base.

How do you relate to your avatar in this piece, and is this typical to the way you relate to avatars you use?
My relationship to Yourself is complex – I created her a couple of years ago as an explicit virtual version of myself for exploring virtual renditions of spaces, but she took off and separated and it became this mutually controlling relationship. For example in older videos she has longer hair and different glasses, which she continued to have for about eight months after I cut my hair and changed my frames. But when I thought her appearance change became narrative compliant, I felt the need to take a photo in my bathroom and draw her in cutting her own hair before I started using her refreshed version in my videos, without the intention of showing it in a professional context even, just so I could progress in a way that made sense. Then later I gave her a Sailor Moon-esque transition scene, when I had time to focus on it. She’s the same as my identity, but lagging behind and not localised, yet I still feel compelled to make her existence extensive and continuous.

I tend to internalise what various avatars of mine go through, but Yourself is special in that regard. And obviously she accesses spaces and experiences very differently to me.

There’s a certain loneliness to your work, is that intentional?
Partially yes – the worlds I present are all-encompassing and free-roaming, but they are tied to a subjective experience that’s channelled through Yourself, which is necessarily lonesome. It’s partially coincidental that I happen to travel alone often and I subsequently went to Japan on my own. It’s also because immersion tends to be a solitary act. I am aiming to deliver a sense of disconnection, however, or maybe more a need to navigate a multitude of disconnections and connection throughout different worlds and environments, and accepting that a complete experience of all worlds and realities at a given point in time is not currently possible.

‘Geltung [validity]: perception of a natural right’ will be on until 12 November 2017 and also features work from Diogo da Cruz, Max Dovey, and Felicity Hammond. Generator Projects is based at 25-26 Mid Wynd Industrial estate, Dundee, DD1 4JG.