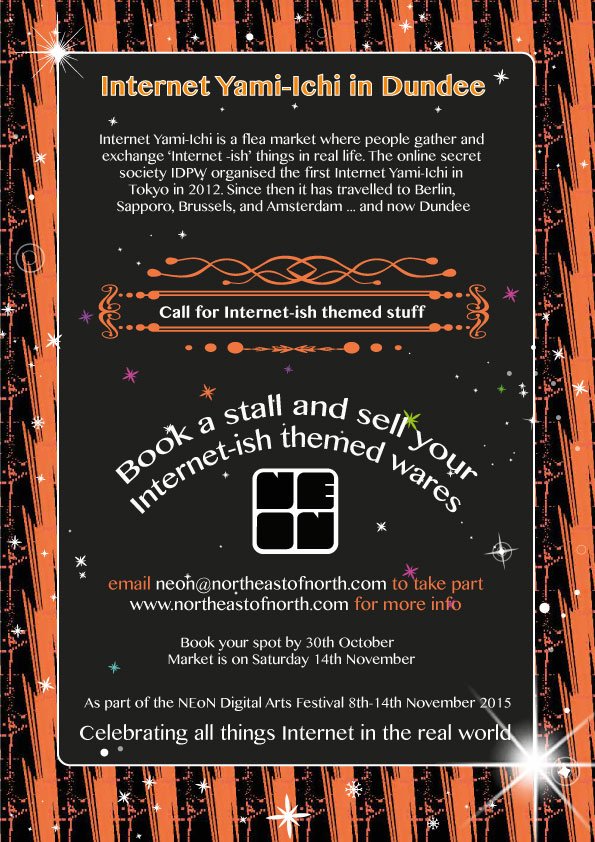 Call for Internet-ish themed works
The Internet Yami-­ Ichi is a flea market where people gather and exchange “Internet­ -ish” things in real life. The online secret society IDPW organized the first Internet Yami-Ichi in Tokyo in 2012. Since then it has travelled to Berlin, Sapporo , Brussels, and Amsterdam.
Book a stall and sell your Internet-ish themed wares – past items sold have included glitch embroidery, apps rejected by Apple, Internet Panties, Internet flavoured tea, lost memes and actual SPAM mail.

The Japanese word “Yami-Ichi” means “black market”, however the word ‘Yami’ means “sick for” or “addicted to” ….. are you obsessed with the Internet? Well bring it into the real world and swap things with other addicts.

To book your spot email with Yami-­ Ichi as the subject. Book your spot by 30th October and the market is on Saturday 14th November.

Interesting things you should know:

What is the Internet Yami-ichi?

• It’s an off-line Internet-themed flea market
• It’s an attempt to let some fresh air into the world of the Internet–which starting to feel a bit uptight–by downloading our Internet activities to exchange in the actual world, as a flea market
• Yami = Dark side, “sick for”, “addicted to”, etc

Back Streets of the Internet – A documentary film that follows the activities of IDPW with a focus on the Internet Yami-ichi.