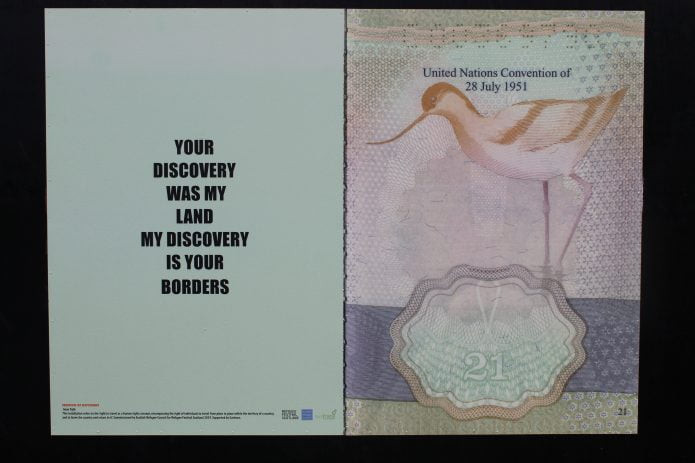 NEoN’s theme this year is React, and so we’ve been anticipating this year’s Refugee Festival Scotland with interest. We spoke to Iranian artist and photographer Iman Tajik, who has created an installation between V&A Dundee and the Tay Road Bridge (alongside the river) entitled Freedom of Movement. The work seeks to question the geographical borders and socio-political barriers that humanity faces.

The theme of this year’s Refugee Festival Scotland is Marking Art, Making Home. How did you feel when you first heard about the theme and what made you want to respond to it in the way you have?

With this theme I felt welcomed. Art can play an important role in making connections and starting conversations. The theme made me feel at home, at peace, and safe.

Your installation, Freedom of Movement, will be installed on the National Cycle Network 77 of Dundee’s Riverside for three months. What made you choose this site?

I worked on this project with Soizig Carey, the Arts and Cultural Development Officer at the Scottish Refugee Council. We were offered some space by the National cycle network, which was good because the idea of cycling and roads connected with the concept of movement.

The place we chose is next to the river, which also invokes the idea of water, boats and ships connecting places to places. Also, because it’s close to the V&A people might pass the posters.

How important is the right to be able to travel freely?

I would like to use the word movement instead of travel.

The right to movement is a basic right for any human or species on the earth. It is natural. We need to move. Moving for our own needs and reasons has to happen, it’s part of the natural cycle. Travel is another name for moving on the earth. We should rethink how we frame the idea of moving and how we think about borders.

How have you personally been affected by the experience of crossing geographical borders?

I have always struggled with my right of movement, and have personally been affected by the experience of crossing geographical borders. I think everyone crosses borders, but for some they are invisible.

How can we work together to resist barriers and boundaries to freedom of movement?

We can open our doors and be welcoming to each other. Share and learn from each other. And raise awareness of the barriers and boundaries that we all face.

We also have to resist political extremism and the capitalists who make and use these barriers and boundaries for their own benefit.

What do you think is the biggest danger to freedom of movement at the moment?

Forgetting that we have these rights!

Can you tell us a bit more about your flag-making workshop at the V&A Dundee on Friday 28 June?

It is an invitation to share and get to know each other. I will share my works and ideas and we will have a conversation about the “Who is?” project, my collaboration with Jonas Jessen Hansen. In this particular workshop we will explore the idea of the flag and its relationship to individuals and groups. Also, we’re going to have fun!

Join Tajik for a conversation about his work and for a flag-making workshop at V&A Dundee on Friday 28 June. Artist Talk begins at 11am, with a drop in workshop from 12-5pm.