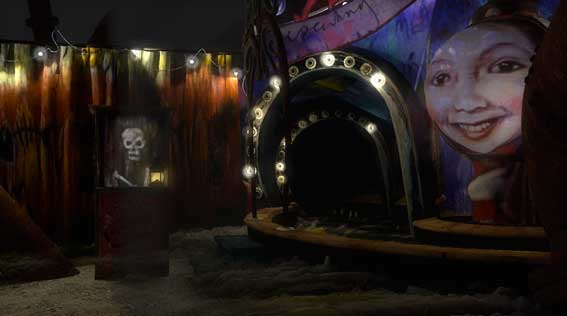 Electronic producer and vocalist Fiona Soe Paing creates surreal and hypnotic audio-visual shows, weaving skeletal, off-world electronica, projected 3D animation and live vocals into a mesmerising “live cinema” performance, which has been presented in cinema, theatre, gallery and club spaces in the UK and New Zealand.   Of Scottish/Burmese origin, and based in rural Aberdeenshire, her alien lullabies, with vocals alternating between Burmese, English, and purely abstract sounds, are accompanied by 3D animation by New Zealand based collaborator Zennor Alexander.  In 2012, Fiona was granted funding by Creative Scotland to create new music and animation pieces, and the resulting work the “Tower of Babel” EP and its accompanying animated videos were released on the Black Lantern Music label.  Drawing comparisons to Fever Ray, Four Tet and Memory Tapes,  the EP  had very positive reviews worldwide,  including a Four Stars review in The Skinny Magazine.

“Tower of Babel can be described as an exploration of the world in a state of flux; a haunting translation cloaked in an apocalyptic backdrop. Fiona’s compelling voice is woven into minimal yet well placed instrumentation that wastes no time pulling you into its mutant world. Expressive in her ability to convey a type of carnival futurism that is reminiscent of a bladerunner-esque reality, Fiona stands on the precipice where genres are redefined and transcended. Her work is at once strikingly original and sure to be supremely influential.   (ELECTRONIC MUSIC EXPERIMENT BLOG, USA)

More can be found here & here