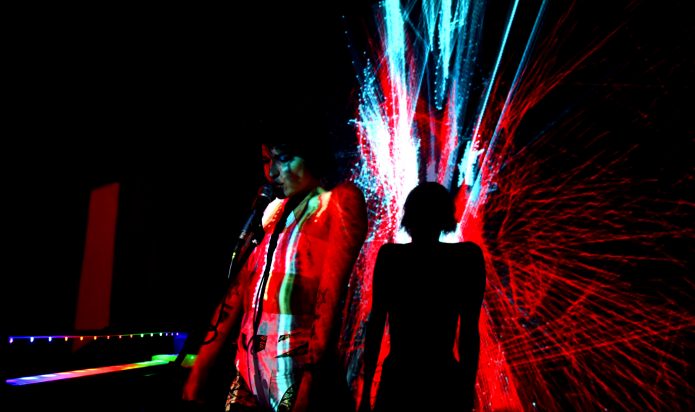 NEoN is very excited to announce Yasmin Gate will be performing live as part of this years finale.

Yasmin‘s live show is an innovative audiovisual experience for the club scene. Not only does she illuminate the stage with her vocals and charismatic presence, she truly glows while she plays her custom instrument, the Dsumi (DS Unconventional MIDI Instrument). Her music is accompanied by an interactive visual system designed by Japanese artist Tatsuru Arai.

She also played as support band for artists such as Nina Hagen (Asphalt), Wolfgang Flur Ex-Kraftwerk (Lido), Magnus (Kantine Berghain) among others.

Yasmin Gate (Killerrr) is a vocalist, Dj and performance artist born in Buenos Aires, Argentina.
In 2004, while living in Madrid, she started Dirty Princess, a project that would hit the spotlight with their raw EBM sound and their provocative performances. Soon after, they joined International Deejay Gigolo Records.

In 2008 she heads back to Buenos Aires and starts her solo career as Yasmin Gate (Killerrr). Her sound became more eclectic, powerful and dancefloor oriented but with a more modern and personal feel. For her live performances she started to incorporate a custom, never-seen-before instrument, the “Dsumi” (DS Unconventional MIDI Instrument) designed in Argentian by DS Digital Luthier.

In 2010, back in Europe Yasmin starts showcasing her new material in venues like the Rex in Paris, Tresor in Berlin or the Gipsy Club in Moscow. In 2011 now established in Berlin she releases her first album ‘YG The Album’ on French label Space Factory run by techno producer David Carretta. The album features artists such as DJ Hell, T.Raumschmiere, Douglas McCarthy (Nitzer Ebb) among others.

Not long after Yasmin co-founded the german record label Killerrr and music Blog ThisIsKillerrr, with producers Dualesque, where she released 3 singles: ‘This is A Test’, ‘Spinning Around’ and ‘Da geht Der Punk ab’.

Her new nine-track album ‘Dollhouse’ shows a pop side combined with inky washes of Trap and Hip Hop blips. The album was recorded in Berlin and produced by the electronic duo Dualesque.