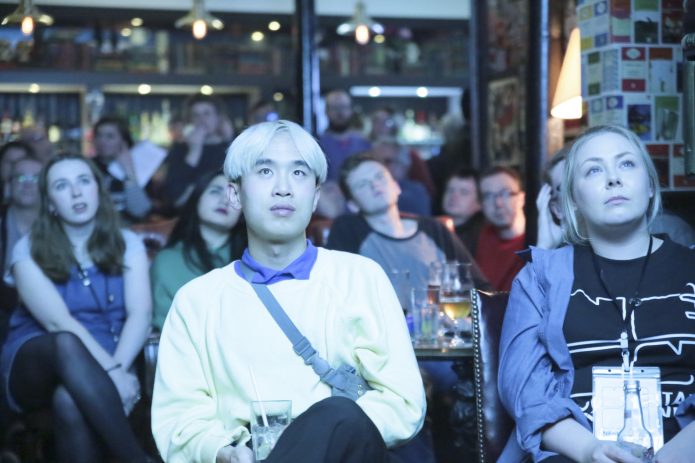 Beginning with a writhing naked woman, the NEoN Artists’ Shorts Screening Programme was a cosy affair which took place in a packed George Orwell on 7 November. Over the course of several films it explored the lifespans of imaginary insects, our electronic waste, female fertility, and more.

The first film ‘Infected’ by Gina Czarnecki was about the nature of the physical body and featured Iona Kewney as the naked woman. Over the course of eight minutes her image pulsated and shifted until it was merely streams of light.  The hypnotic rhythm of Fennesz’s score allowed the audience to take their seats and was a fitting opener.

It was followed by ‘The Order Electrus’ by Floris Kaayk, a delightful fictional documentary in the style of David Attenborough. “As nature merged with technology new forms of life emerged,” explained the voiceover, which was provided by Tony Maples. To the music of Debussy the film imagines the lifespans of electrical insect species. Repurposed industrial buildings were the perfect site for this work.

In a similar vein Francois Knoetze’s ‘Core Dump’ – of which the screening was the UK premiere – told the fictional tale of an electronic scrap merchant who rebuilds himself after an accident. Although it could easily have appeared ridiculous, instead his suffering and anguish was apparent in almost every scene and kept the story grounded. “I rebuilt myself the only way I knew how,” says the protagonist at one point, alluding to the DIY aesthetic of the character design. The story reminds the western viewer of the way countries like Senegal and the Democratic Republic of Congo are used as dumping grounds for electronic waste, and imagines how this waste could be re-purposed. It’s almost a cautionary tale, much like Keiichi Matsuda’s ‘Hyper-Reality’, which follows a day in the life of a woman in a fictionalised version of Medellin, Colombia. Her life is dominated by a wearable augmented reality overlay, full of advertising and points systems. The film acts as both a glimpse into the future and a warning of what the consequence of that future might be.

On a lighter note was Liat Berdugo and Emily Martinez’s piece ‘Making You’; a parody of cheap television and online video adverts centred around the question “how to make yourself…” with the predicted text endings being the piece. Or Jeremy Bailey’s ‘Transhuman Dance Recital’, which featured the creator’s floating head dancing with a small cyan triangle. Mary Maggic Tsang’s ‘Egstrogen Farms’ was also rather fun. It presented itself as a solution to female reproductive difficulties with the marketing line of allowing women to ovulate as frequently as chickens. At only a minute long it was short, but perfectly formed.

Overall, the screening programme was a highlight of this year’s NEoN digital arts festival. Make sure you catch it next year!