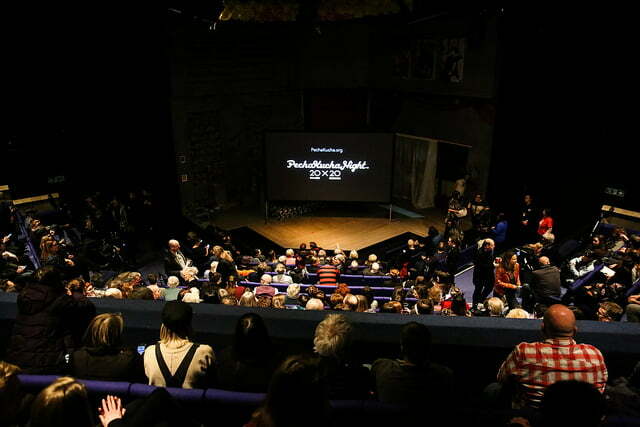 Join Creative Dundee for the next Pecha Kucha Night in collaboration with NEoN Digital Arts at Dundee Rep. Creative Dundee has hosted PKNs in the city since 2011 and they run in over 1,000 cities around the world!

It’s a simple quick-fire format – speakers show 20 images, each for 20 seconds. Each person chooses their own topic – their work, their loves, hates, hobbies or holidays! The night is a great way for people to meet and hear about interesting activities happening locally across the city and beyond.

Always different, entertaining and inspiring; there is something for everyone at this event night which first started in Tokyo in 2003 and has now grown into a global phenomenon.

Working in partnership with Dundee Rep, Creative Dundee is an organisation which supports creative talent to base, grow and sustain their practice in and around Dundee, by connecting and amplifying the city’s creativity.

Jen Southern – Jen Southern (UK) works with relationships between people, technologies and places. Her working process is usually collaborative and often begins with the tracking or tracing of movement and communication, such as with a Mountain Rescue Team and its dogs, or with players in a mass football game. Southern undertakes experimental and often playful research related to a specific place, time or group of people. Whether it is learning to fly a light aircraft or making videogame clothing, her work plays with the idea of what it means to live life alongside or within networks. In collaboration with other artists, technologists or members of the public she works with the layering of digital and physical in everyday local environments.

Marius Watz – Marius Watz (NO) is an artist working with visual abstraction through generative software processes. His work focuses on the synthesis of form as the product of parametric behaviors. He is known for hard-edged geometrical forms and vivid colors, with outputs ranging from pure software works to public projections and physical objects produced with digital fabrication technology.

Julie Freeman – Julie Freeman (UK) translates complex processes and data from natural sources into kinetic sculptures, physical objects, images, sound compositions and animations. Her work explores relationship between science and the natural world; questioning the use of technology in how we translate nature.

£7 Tickets at www.creativedundee.com
Amps supporters, students, un-waged, over 60s and under 18s: £5
Access: This venue has full disabled access.