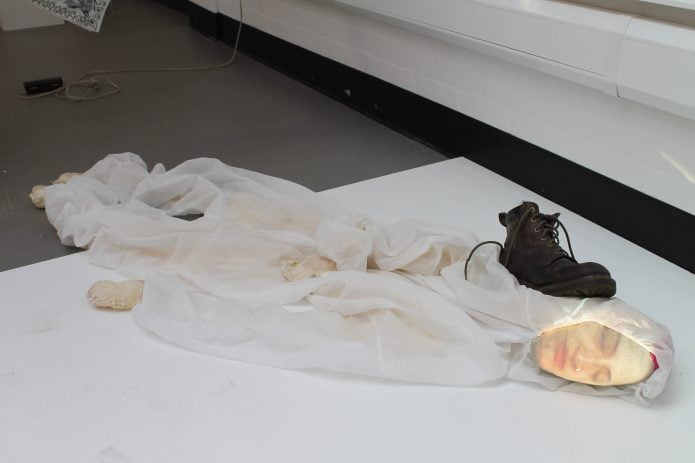 The animation department is particularly strong as this year’s degree show at Duncan of Jordanstone College of Art & Design. There’s also some intriguing digital art pieces commenting on surveillance culture and the politics of oppression, as well as some more personal works. There’s a couple videogames that are worth seeking out, and lots to see in ‘Social Digital 19’. Give yourself a couple hours and head on down.

Starting in Illustration there’s an intriguing text-heavy videogame called ‘Date of the Dead’ made by Katriona Gillon. The basic plotline is that you’ve been sent to purgatory by accident, but your libido is still very much alive. In an effort to alleviate the boredom you start chatting to the various inhabitants of the underworld, choosing between dialogue options as you attempt to seduce them. There’s no character creation setting so the game can be interpreted as queer-positive, allowing you to flirt with monsters of any gender.

One floor up in Animation there’s a fantastic little film directed by Keilidh Bradley called ‘Fox Fires’ and inspired by the Finnish name for the Aurora Borealis or Northern Lights. A beautiful fairy tale with a standout soundtrack, the film is about the origin of the constellations and manages to be both otherworldly and charming. Keilidh also produced the shorter piece ‘First Dog In Space’ alongside classmate Tessa Bentley – which manages to tug on your heartstrings too. ‘ChemisTree’, directed by Gosia Chlopek and Lukas Gecas, is also a stunningly animated story – following an elderly tree-spirit and his apprentice as they care for an apple tree through the seasons.

In the Graphic Design department where there’s a 2D platform game called ‘Nott’s Nightmare’, about a Sonic The Hedgehog-like character who must collect orbs of light and reclaim his soul. Created by Daniel Walpole, the game is cute but unforgiving. A hidden gem.

This year the Digital Interaction Design and Product Design courses have been merged into ‘Social Digital 19’. At the back of the room is a rather interesting project; ‘play.world’ by Jenna Maudlin is an interactive suit with accompanying video game, designed for children. It’s cute, colourful, and the games that go along with it seem engaging and fun. Hopefully it will be picked up for production.

In Fine Art, CCTV is used in several pieces to critique surveillance culture and showcase some cool technology. Toby Jackson’s ‘Blind Eye’ uses an Xbox motion sensor to erase the viewer from a live projection of the space. Onlookers can still be seen, but the person who set off the motion sensor vanishes. 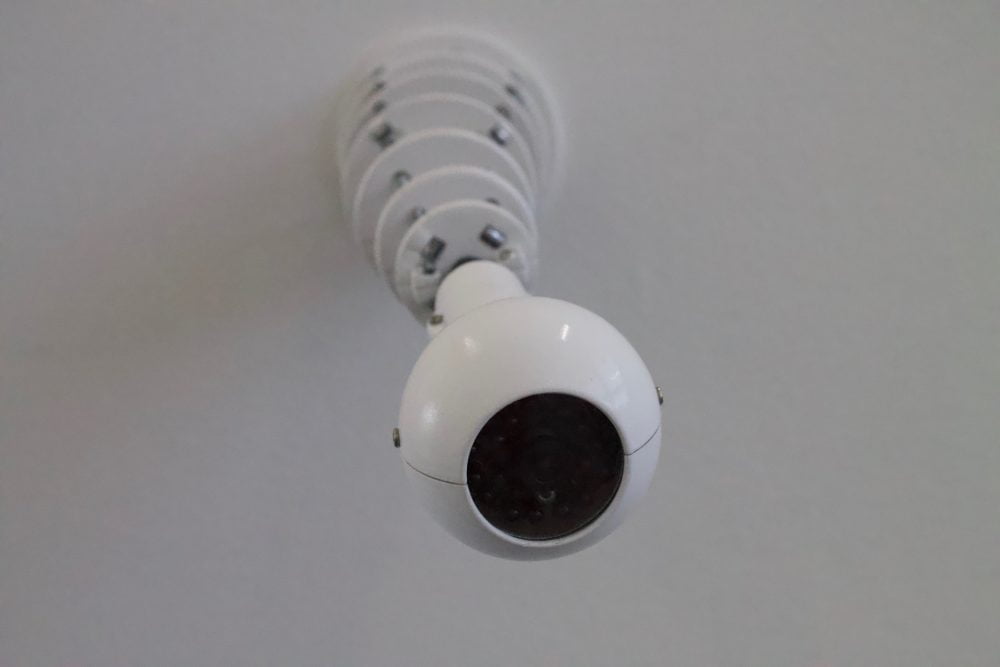 Duncan Pottinger’s ‘CCTV (Closed Circuit Tentacle Vision)’ uses the human inclination to anthropomorphise to its advantage. You’re so caught up watching the cute electronic tentacle search around the room that you don’t really register that you’re being filmed. Discovering the TV monitor on the other side of the wall is particularly satisfying if you catch someone else interacting with the piece, as the faces we make when we forget we’re being watched are endlessly amusing.

Jakub Stepanovic’s work ‘Duality’ also contains a live video feed, interspersed with abstract graphics generated in real-time and common symbols such as the pound sign and the logos for various political parties.

If this all makes you feel a bit paranoid head along to see Saskia Singer’s work. Her self-described squiggles are revitalizing and definitely recommended if you’re starting to feel a bit overwhelmed – use the headphones provided for the full relaxing effect. 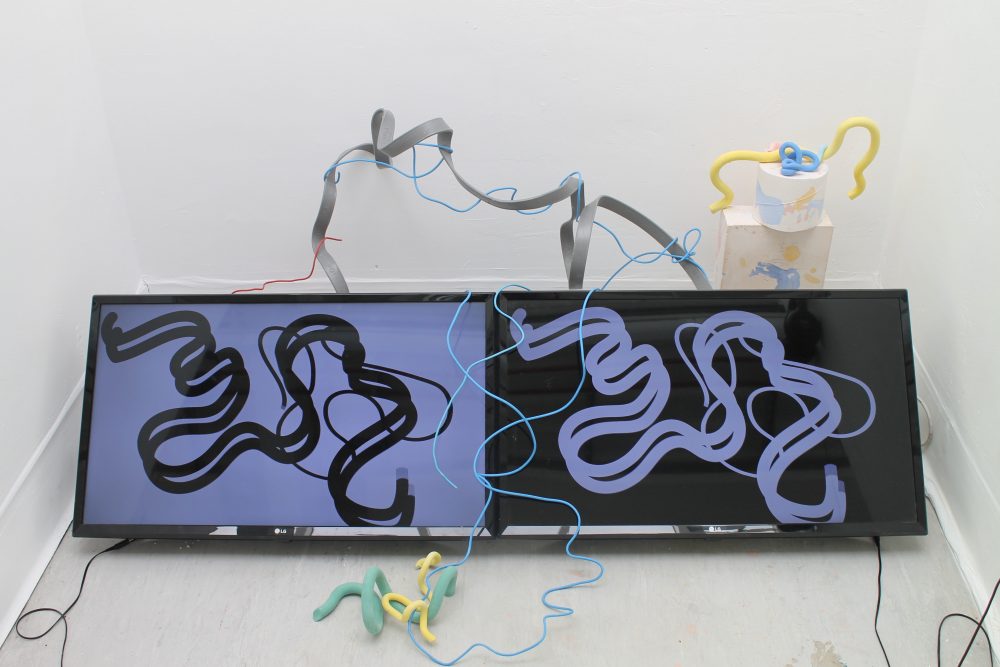 Katherine Allan mixes birdsong with the beeps and whirr of medical equipment in a peaceful but unsettling sound installation called ‘The rest of us… we just go gardening’. Inspired by watching her mother undergo various intensive treatments to fight a brain tumour, the piece features a hospital bed covered in plants. Inside lies the outline of a person in porous plastic. A video shows Katherine caring for the plants while wearing a white nurses uniform. The mood is sombre, but the entire work has an underlying confidence. Very effective. 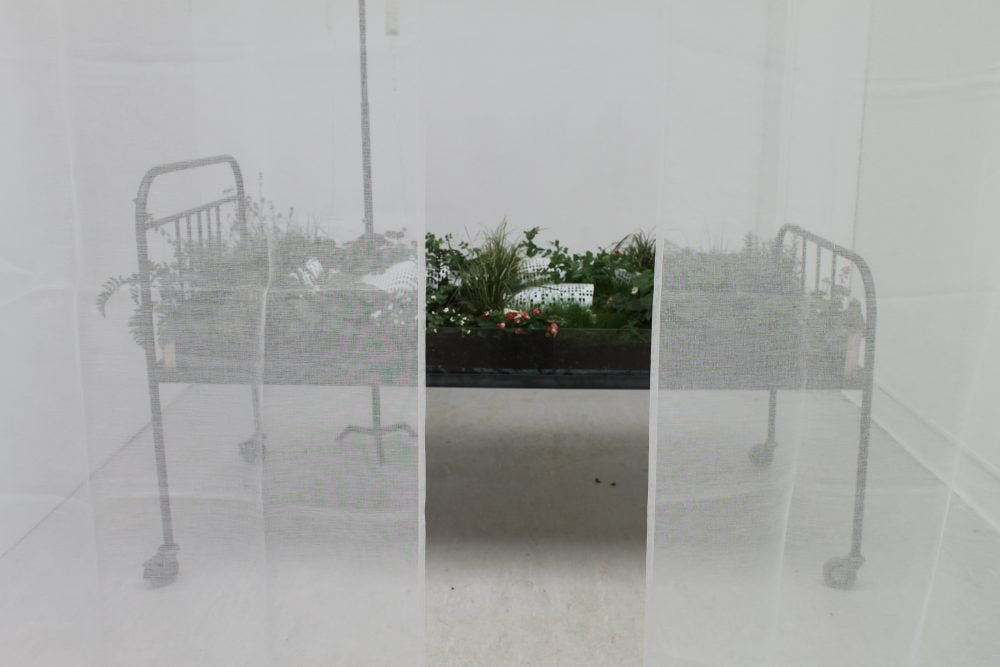 Montse Pearce Suarez also pushes our sense of the uncanny. The viewer is confronted by a pile of semi-transparent material in the shape of a person. Where the head would be is the projection of a woman’s face, but a physical boot in crushing her. She looks around, incapable of moving, and occasionally saying things like “if you want to imagine the future”, referencing the famous quote by George Orwell; “If you want a vision of the future, imagine a boot stamping on a human face – forever.”

Finally Xuxa Rettie’s sound installation invites you to “come in and sit, stand, lie, lounge in my discomfort”. The room is bathed in a warm orange glow and has two large beanbag type shapes to collapse on. The audio gives an insight into the artist’s anxiety in the form of a self-critical inner monologue intermixed with doors opening and closing, keys turning, crowds of people, and other everyday noises.

Overall there’s lots to see at this year’s show, which runs until Sunday the 26thof May, 2019. Entry is free. Duncan of Jordanstone College of Art & Design can be found on the Perth Road, Dundee.

Words and Images by Ana Hine.