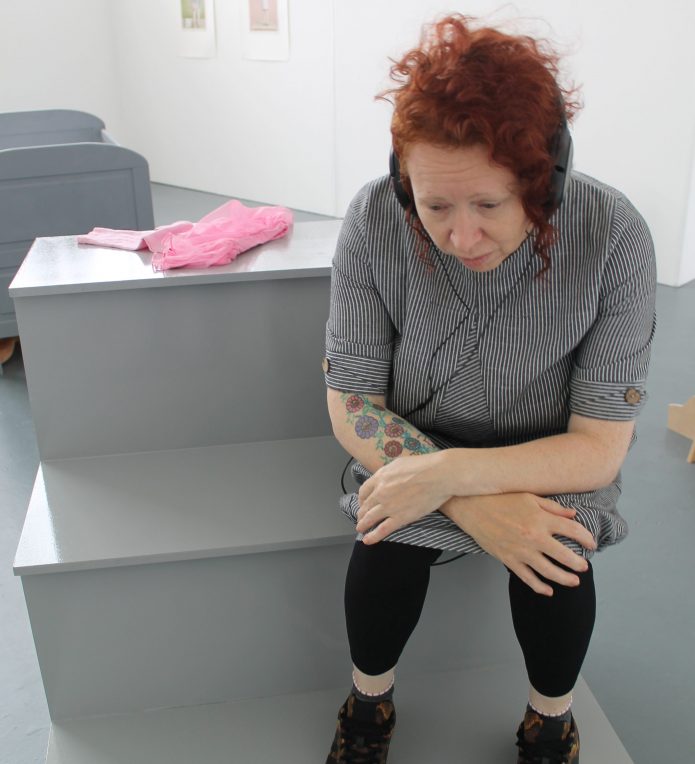 “You might not be triggered,” laughs Erin Crossan, 27, as she discusses her piece ‘Naughty Step’. Part of an installation exploring the other-ing of children, the interactive work utilises deceptively simple design choices – such as having an especially short cord for the single pair of headphones – to force the viewer into the role of either scolding adult or admonished child.

Having undertaken an HND in Digital Art & Culture in Glasgow between her undergraduate degree in oil painting and her masters, Erin is clear that the principles she learnt have carried on into her installation for the MFA Art & Humanities course. “I felt there was a gap in my knowledge around the electronic side of conceptual art so even though this is not wholly digital there’s an interactivity in the work that is influenced by that course.”

Her work is in a room with two other students on the same MFA, also exploring ideas related to interpersonal relationships and – one could say – feminism. There’s Serena Manganini, whose film ‘My Weird Body’ uses stop motion animation, traditional hand-drawn animation, computer generated images, and digital film to create a surreal film devoid of dialogue but full of questions. The other student is Sarah Smart, whose films ‘Commercials for the Cyborg’ and ‘Callum Mackie Shaves His Beard for Sarah Smart’ comment on binary gender norms, personal identity, and celebrity. She will also be holding a live performance at 6pm every weekday of the show.

In a different room Aimee Grace Stewart uses a slowed down rendition of the nursery rhyme Three Blind Mice to accompany grainy footage of white laboratory mice with their eyes sewn shut to create a sense of severe unease – footage she filmed herself. Another piece of hers breaks down the composition of the human body into its chemical components – unfortunately represented only by text and empty bottles rather than the chemicals themselves (though the difficulty and legality of sourcing some of the materials might play a role here).

Bio-art is obviously a central part of the MSc Medical Art and MSc Forensic Art & Facial Identification. There’s a CGI craniofacial reconstruction of a Neanderthal man produced by Claudia Pitcher, a 3D animation of a mapk signalling pathway by Daheen Lee, and a colourful web comic for children undergoing general anaesthetic by Isabel Revans. Although the scientific language used can be a little daunting, it’s reassuring that some of these projects are already being used as learning resources for medical students.

The MFA Art, Society, and Publics students are exhibiting their work in the Cooper Gallery. Upstairs Jen Lightbody’s superb ‘Confessional Cube’ invites viewers to either write their confessions onto a chalkboard or record them. This creates a tension between saying a secret or embarrassing truth aloud – which other gallery visitors may potentially hear – or leaving it written for all to see.

Downstairs Charis & I’s ‘An Act of Love’ confronts members of the public with the questions; “Are you oppressor? Are you oppressed? Or are you free?” A combination of video pieces show Charis dancing like an evil insect in a yellow floppy hat with long hears, sparkly golden make-up, black lips, and heavily smoked eyed. Again, live performance is an element of this work.

Finally, Joshua Wilson explores the archival value of sites like Instagram, by inviting people to take the materials he has prepared – including hand-knitted blankets – chop, combine, and scan them, before pinning them to a collage board that he is regularly photographing and uploading online. He explains: “I’m using Instagram for two reasons. One, I’m actually a bit of a luddite and I tried to resist using social media, but my tutors pointed out that I’m using these techniques and they told me I was a digital artist.

“So I have started using Instagram. Secondly, I can put mass volumes of photographs and content on it. It helps me work fast and produce a high volume of work.”