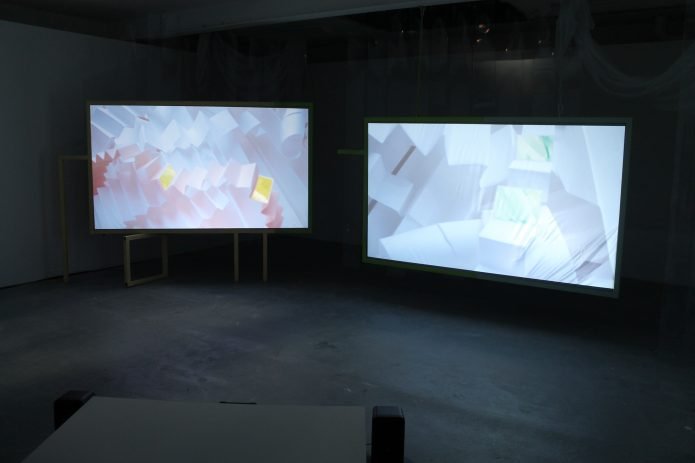 NEoN blogger Ana Hine checked out the Duncan of Jordanstone College of Art and Design Degree Show 2018 in recognition of the Year of the Young People.

The best digital art pieces at this year’s degree show at Duncan of Jordanstone College of Art and Design were incredibly simple, deceptively so. Take Catriona Beckett’s two-screen piece ‘Balances in Tandem: Harmonic Opposites’ on level six of the Crawford Building; a relaxing combination of sound, video, animation, and painting that looked like a memory of an Escher staircase. The constantly shifting folded paper move to a light, refined tonal soundscape of electric piano. The Art & Philosophy student wrote and performed the musical accompaniment to the piece herself, and describes the works as being: “continually embedded with new meanings as they are co-authored; letting them exist by re-generating imaginatively within the space.”

This focus on sound and atmosphere is also present in Laura Stubbings’ work, available to view immediately upon entering the lower foyer of the Cooper Gallery. Her immersive installation piece, ‘Ego Death’, involves the viewer putting on a pair of headphones and stepping into a small cylindrical room, which at first looks completely black. As your eyes adjust the walls are revealed to be covered in round lights the size of a two-pound piece that fade on and off in time to the peaceful, almost meditative music. Stubbings writes that the piece is an attempt to: “take the viewer out of their own mind, to quieten their ego, if even just for a moment… the darkness allows you to become one with the space.” The effect was similar to being in a sensory deprivation tank, and while it wouldn’t be something to recommend to people who struggle in claustrophobic spaces it was a highlight of the show.

Calming light was also used in Andrew Shearer’s prototype lamp in the Product Design display on level five of the Matthew Building. His design responds to weather patterns and increases the level of blue light in response to a dull cloudy day or a day with fewer daylight hours. The idea is to combat seasonal affective disorder, which can affect a large proportion of adults in northern countries. He explains: “The Sun Assisted Daylight (S.A.D.) lamp adjusts its brightness depending on the live weather being recorded, and therefore it should help steady anybody’s circadian rhythm very subtly.”

Back on level six of the Crawford Building, Steven Shealth in the Fine Art department used the open-source micro-computer Arduino to create a programed light display within porcelain wasps’ nests. He hopes that the piece will draw attention to the fragile position of bees, wasps, and other insects in our eco-systems which are struggling. He writes: “Porcelain just like the eco-system is fragile and if you are not careful it will break into tiny pieces. The use of light and sound create an immersive sensory experience while expressing the life of these creatures, which threatens to be extinguished”.

Although the amount of digital art on display this year is fairly small, those who want to see a relaxing mix of technology and creativity would do well to head down the Perth Road and check out these pieces. The degree show is on until May 27 and is free to visit.